The Blogs
Philip Stein
Apply for a Blog
Please note that the posts on The Blogs are contributed by third parties. The opinions, facts and any media content in them are presented solely by the authors, and neither The Times of Israel nor its partners assume any responsibility for them. Please contact us in case of abuse. In case of abuse,
Report this post. 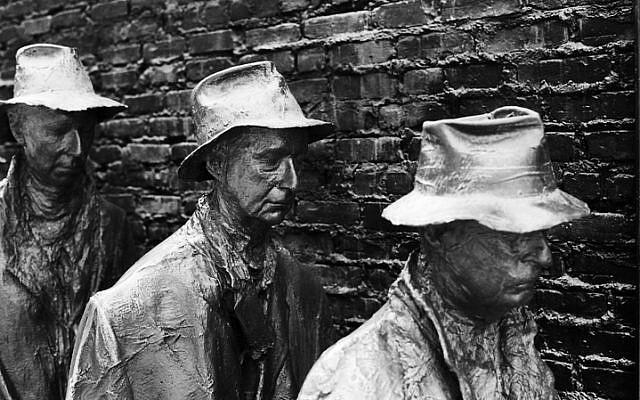 Washington DC, USA - July 17, 2014: A detail from one of the statue groups at the Franklin Delano Roosevelt Memorial that portrays the depth of the Great Depression. (Scanned from black and white film.)

When I was a kid in the mid-1960s, Whitey, Jimmy, and Joe were about 60 years old. I recall them, their faces, names, and stories, as semi-regulars, older men employed by my grandfather as day workers in his wholesale egg and poultry business. Today we would call them homeless.  Sometimes they worked for several weeks, then they would disappear and resurface when they needed money, or when my grandfather was short-handed at his warehouse. My grandfather or one of his drivers, with 11-year-old me in the front seat, would stop in front of one of the single-family houses in the residential Southside of Chicago, beep the horn and these men would emerge from underneath a front porch where they had spent the night.

These men had not always been living in such a pitiful state. Thirty years before, they had been bankers, salesmen, and musicians. They were all victims of the Great Depression; they had lost their jobs, their homes, and in some cases, their families. They all drank alcohol, particularly beer, and were probably alcoholics. The economic upheavals of the 1930s had hit these men hard, and thirty years later they were still languishing, never being able to get back on track. I would sit with these men during lunch break out on the loading dock, and while chatting I would eat my sandwich and they would drink large bottles of beer, which they always offered to share with me (I was 11 years old!).

I am thinking about these men as we are in the early stages of returning to our normal routines as Covid-19 starts to fade. Assuming we are privileged enough to still have our jobs and businesses, we can restart our lives and continue the paths we were on a few months ago. But what about the people who have lost their jobs, whose businesses have been forced to close; what are they to do? Some will undoubtedly find new employment, young entrepreneurs will start over, and others will put their skills to work in a different framework.

However, what about the Whitey’s, Jimmy’s, and Joe’s of 2020? There are people out there who have lost a great deal.  Will they also lose their families, succumb to drug or alcohol addiction, and spend the next 30 years wandering the streets? It breaks my heart to think so. I think all of us who are among the fortunate group must keep our antennae out to seek to help those who now find themselves in the unlucky group.

Over the last few years, successful hi-tech business people have established social impact funds to promote businesses with a positive social agenda.  I believe there are many of us who could do things to cause tremendous impact for those less fortunate than ourselves in the coming months. I suggest that if we can offer even a part-time job to a young person who appears to have been knocked off track due to Covid-19, this could have repercussions for decades to come.  Also, perhaps we can provide some advice, financial assistance, or free re-training to some. To do this, we will need to network with our friends, perhaps exiting our comfort zone, to reach out to someone we don’t know who has been laid off or put out of business.

It would be nice to know that we helped someone today so that the counterparts of Whitey, Jimmy, and Joe could look back with gratitude in 2050, recalling that someone lent a helping hand during the Covid-19 crisis.

Wishing you all good health and livelihood.