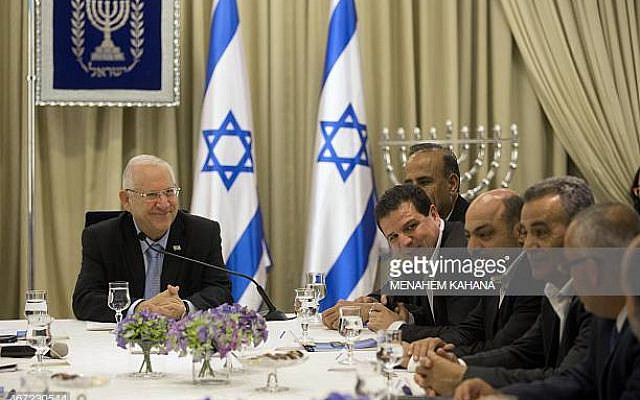 Israeli President Reuven Rivlin (L) listens to Ayman Odeh (4th-R), head of the Joint List, an alliance of four small Arab-backed parties, during consultations at the President's residence in Jerusalem on March 22, 2015, to hear who they would recommend as prime minister. In Israel, it is not necessarily the leader of the largest party who forms the next government and becomes the premier, but the one who can form a working coalition, preferably with a majority of at least 61 -- in this case, Netanyahu. AFP PHOTO/MENAHEM KAHANA (Photo credit should read MENAHEM KAHANA/AFP via Getty Images)

Who are the Israeli Arabs who voted in large numbers for the Joint List of Israeli Arab political parties in the March 2 Israeli Elections?  A full 88% of them voted for this combination of 3 Arab parties and one Jewish-Arab party, demonstrating clearly that this political party represents them in the new Knesset, Israel’s parliament.

The most politically correct term for them these days is “Palestinian Arabs of Israeli citizenship”. They represent about 21% of the citizens of Israel. According to the latest statistics, of December 2019, there are 1, 916,000 Arab citizens in Israel, out of a total population of 9,136,000.

The main components of their identity are: 1) Arab Culture, 2) Part of the Palestinian People, 3) citizens of Israel, and 4) Religion (mostly Muslim). Let me explain.

In their schools and communities, they speak and learn in the Arabic language, as their mother tongue. They feel that they are part of the Arab world, its history (which they learn) and its contemporary struggles. They read Arabic literature, partake of Arab culture (song, dance, literature, art), watch Arabic television stations (especially Al Jazeera), and follow events in the Arab world closely, especially in the Middle East, and particularly in the countries that border Israel (Lebanon, Syria, Jordan, Saudia Arabia). The language that they use on their smart phones is Arabic!

Moreover, much of their culture is perceived by them to be not just “Arab” but also “Palestinian”, including history, art, dance, music, literature, food and dialect, since they consider themselves as indigenous to this land. While many Jews may view this as an oxymoron, or even as traitorous, the Palestinian Arabs of Israel see their identity as combining Arab, Palestinian and Israeli elements (more on the Israeli part of their identity below). This is the result of the “Palestinianization” of Israeli Arabs that has been going on since the end of the Six Day War of 1967 and especially since the Oslo Accords of 1993. It is in contrast to their previous status as only “Israeli Arabs”, which was how they were described in the early decades of the state.

As Israeli citizens, this minority group sends their children to schools which are supervised by Israel’s Ministry of Education (through a division called “The Arab Sector”). More and more of their children are graduating Israeli high schools and going on to study at Israeli universities. Most of them know Hebrew as a second language, and often at university, it becomes their first language. Many read Israeli newspapers, view Israeli news and sports on television, engage in commerce in Israeli malls, and speak Hebrew with  the doctors, nurses and other health care professionals in Israeli health care clinics and hospitals (they also make up a large portion of the professional staff in out health care systems) They also travel abroad on Israeli passports.

In addition to voting in large numbers in Israeli elections, Palestinian Israelis are very active in civil society through numerous non-profit organizations, many of which actively promote Arab-Jewish Coexistence throughout the country as well as the civil and human rights of the members of their communities.

Over the decades, Palestinian Arabs in Israel have generally been labeled as “Arabs”, which ignores their religious identity, mostly as Muslims and a minority as Christians, (and smaller minority groups of Druze or Circassians). In most cases, the religion of Israeli Palestinians is very central to their identity, and should not be overlooked. Indeed, I would argue that it is impossible to understand Palestinian Arabs in Israel without understanding something about their religious identity. All of the Muslims among the Palestinians of Israel are Sunni Muslims, and the overwhelming majority of them practice a moderate and tolerant version of Islam. The Christian minority—which is divided into many denominations—also believes in and practices forms of Christianity that are peaceful and oriented to coexisting with the Jewish majority. In both cases, their religion is central to their identity in Palestinian Arab society within Israel.

In sum, the identity of Palestinian Arabs, citizens of Israel, Muslims, Christians, Druze and Circassians, is complex and diverse.  It should be incumbent upon the Jewish majority to learn about this identity in detail, in order for there to be more mutual respect and cooperation among the communities, so that Israel can be a shared society for all of its Jewish and Arab citizens.

(For more about Palestinian Arabs in Israel, see my book The Other Peace Process: Interreligious Dialogue, A View from Jerusalem) https://www.amazon.com/Other-Peace-Process-Ronald-Kronish/dp/0761869336