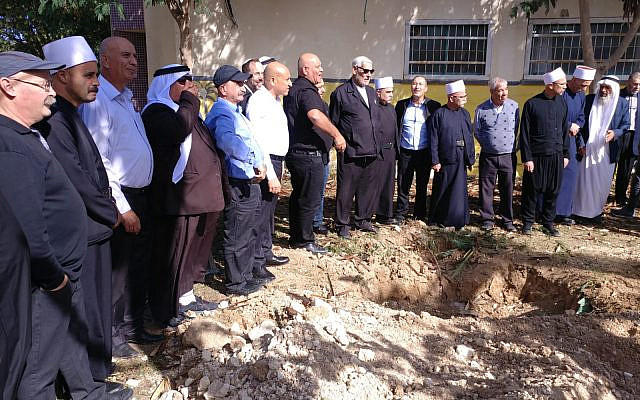 Planting a tree in Rahat with Jewish, Muslim, Christian and Druze friends. (courtesy)

Judaism’s teachings about a person’s essence invariably strike a chord among participants at the many interfaith events I attend. The idea that every person is created in the image of God is especially meaningful to them. While this idea is explicit in the Torah, Rabbi Akiva elaborates on it in Pirkei Avot (3:14) saying, “Humanity is cherished for having been created in [God’s] image…as it states, ‘for He made Man in the image of God’ (Genesis 9:6).” Another principle, also stemming from the account of Creation, is that of kinship among the entire human population. We are all cousins, descendants of Adam and Eve. The sages invested this fact with profound significance, using it as the basis for promoting peace and condemning bigotry: “This is why Adam was created alone…for peace among people, so that a person could not say to another, ‘my father was greater than your father.’”

I often hear a third message, that we are all children of God. Is this actually a Jewish belief? The continuation of the quote from Rabbi Akiva could suggest the opposite: “Israel is cherished, as they are called children of the Omnipresent, particularly cherished…as it states, ‘You are the children of the Lord your God’ (Deuteronomy 14:1).” The straightforward understanding of Rabbi Akiva’s statement is that this special status, of being the children of God, is reserved only for the Jewish people. But I feel this interpretation bears further investigation: How is being created in God’s image tied to being His children? How might this affect the relationship between Jews and non-Jews?

This is the book of the generations of Adam. On the day that God created Man, in the likeness of God He made him. He created them male and female, and blessed them, and called their name Adam, on the day when they were created. And Adam lived one hundred thirty years and begot a son in his own likeness, after his image, and called his name Seth. (Genesis 5:1–3)

From the heading of these verses, “the generations of Adam,” we learn the essence of the connection between a parent and child: The child is born in the likeness and image of the parent. Further, these verses indicate that the original father was God, who transmitted His image and likeness to Adam and Eve. Their descendants are thus His descendants as well. All people are God’s children.

This idea is also discussed in the Zohar: “It is written, ‘He made man in the image of God’ (Genesis 9:6); we see that therefore it is written, ‘You are the children of the Lord your God’ (Deuteronomy 14:1).”

In other words, the verse in Deuteronomy, “You are the children of the Lord your God,” is based on the principle first encountered in Genesis, “He made man in the image of God.” The idea that people are all God’s children connects universal kinship (based on our common descent from Adam) to our having been created in God’s image, and combines them in a single concept: that as God’s children we have all been created in His image.

Standing before our Creator as children, rather than servants, transforms our religious experience. When I see myself as God’s child, I sense that God loves me and cares what happens to me. And when we acknowledge that God has additional children, we recognize that He loves them too. The fellowship of humanity becomes based not only on similarity or blood ties, but on the equal spiritual status of every person.

Still, is it possible to reconcile this explanation with Rabbi Akiva’s statement that the Jewish people was singled out among the nations to be called “children of the Omnipresent”?

I believe the resolution lies in understanding that there are two aspects to being a parent: the biological aspect, i.e., that the child inherits the parent’s DNA, and the practical aspect, i.e., that which grows out of raising the child. Similarly, we can say that there are two aspects to being children of God. “Biologically,” all human beings are God’s children because all were created in God’s image. The second aspect, a personal connection with God, arises as part of a parent-child relationship in which the child knows who their father is and both sides maintain that close relationship. The Jewish people has enjoyed a deep connection with the Almighty, and has thus acknowledged Him as father.

Returning to Rabbi Akiva’s statement, I am struck by the precision of his wording. He declares categorically that every person is created in God’s image; this is an essential quality of the human character. But when he writes about the Jewish people, he does not write simply that they are “children of the Omnipresent,” but rather, that they are “called children of the Omnipresent.” They are cherished because they actively participate in a loving relationship with God; God calls them His children as a type of pet name.

Parashat Bereshit describes Creation, the foundation for humanity’s status as children of God. Fortuitously, the haftara that the rabbis chose for this parasha calls for the Jewish people to be “a light for nations” (Isaiah 42:6). Israel can illuminate the world by setting an example and teaching others how to be children of our Father in heaven.