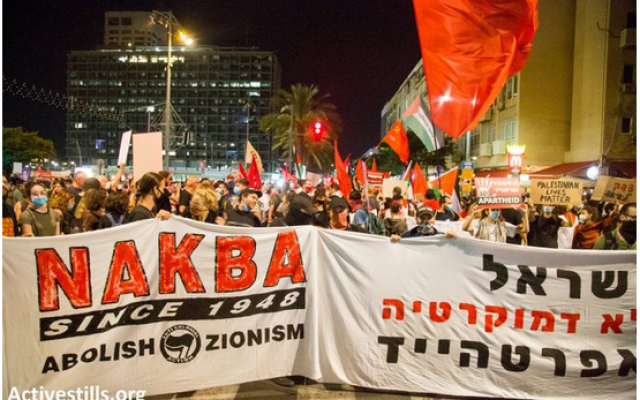 Tel Aviv protest, 6 June 2020, against extension of Israeli law to Jewish communities in Judea & Samaria. Screenshot from Tweet posted by Salem Barahmeh (@Barahmeh) and shown in this article.

It seems some of the strongest Zionist voices are those belonging to a Druze man from Daliat el-Carmel, an Arabic-speaking Christian from Haifa and an Aramaic Christian Maronite from Gush Halav. Let us look at what these three men posted on Facebook about the protest in Tel Aviv yesterday — the protest against extending Israeli law to our communities in Judea & Samaria. This will be followed by a quick note about what I found in the English-language Israeli media.

You won’t see this in the news media.

Yesterday there was a violent and dangerous anti-Israel demonstration in Rabin square under the auspices of 39 organizations and movements from the extreme left, among them many communist organizations, such as Maki, the Israeli Youth Communist Alliance and, of course, Hadash.

Yes, people… 39 organizations and movements without even a single Druze organization present.

Tens of thousands of participants, among them many Israelis who raised the PLO flag and sang the Palestinian anthem “Baladi Baladi”, but Druze and Circassians . . . zero . . . and no NGO or movement.

The media will not talk about that but as soon as they encounter a pitiful Druze individual who is prepared to moan about how bad it is among the Israeli people, they open the evening news with him or her featured in an in-depth story. 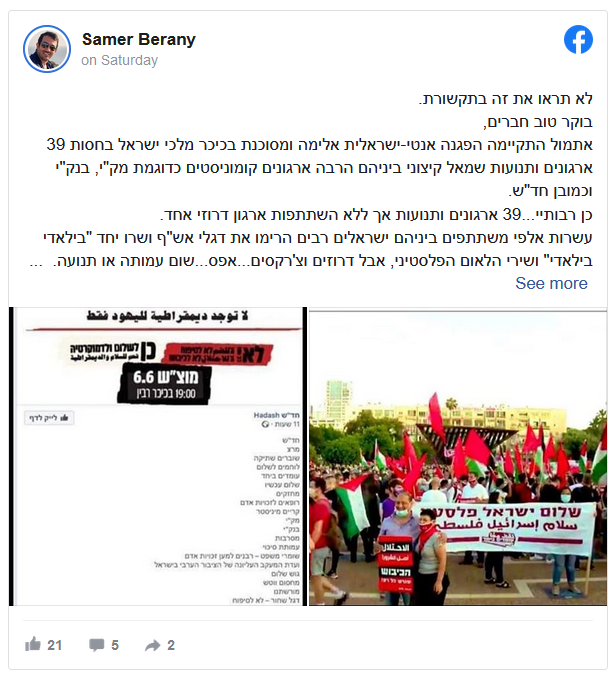 The protest yesterday in Rabin Square was led by the Joint List and next to the Palestinian flags, an Arab-Israeli man raised a sign and on it : “We cant breath since 1948.”

It’s true, not everything is perfect, there are a lot of problems and we must fix them, but writing this sentence as a representative towards the Israeli Arabs… Is nothing but a big lie! What A Shame 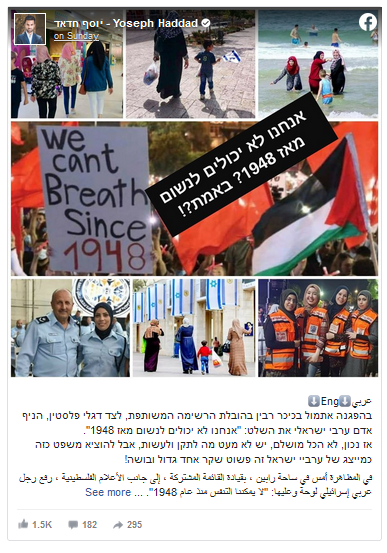 I look and I do not believe to what extent there are Jews who are disconnected from the truth in Tel Aviv. I do not see Israeli flags, but flags of the Islamic Khalifat Palestine Unit. Again they manipulatively trick Israelis in order to weaken Israeli resilience against a vicious enemy that will not, in the end, take pity on them either. Those who destroy you and those who lay you waste shall go forth from you. [Isaiah 49 (17)] 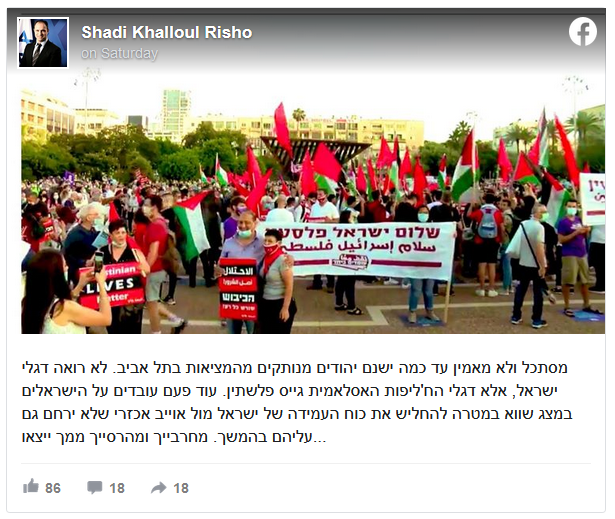 And what is the Israeli English-language press giving us? The go on and on about war crimes and apartheid. Some even uploaded the Bernie Sanders video by which he also took part last night in the cries against Israel extending its law to our communities in Judea & Samaria.

To see the deceptiveness of the media reports, look at the final sentence in an article in The Jerusalem Post:

The Tel Aviv protesters shouted “I can’t breathe” and that they are “being suffocated by the encroaching dictatorship,” referencing the racial riots raging across the US.

What they did not tell readers, however, is that the sign they were quoting read: “we can’t breath since 1948”.

I need to ask: Are all the Jews in attendance at the protest comfortable demonstrating against Jewish lives in Haifa, Netanya, Petach Tikva and even at the very square on which they stood last night?

I did not see any of the English language Israeli media sites show this image in their reports:

Palestinians and Jews coming together in Tel Aviv in a protest defying annexation and apartheid. This is the coexistence and coresistence I believe in. I look forward to the day when we can all be free and equal together. pic.twitter.com/MoQHmALwAP

I guess they do not want anyone to think that there is opposition to the existence of the State of Israel no matter what size it is. What else can “abolish Zionism” mean?

Perhaps most ironic of all is a conversation I had this morning with an Arab Israeli who still believes in the supposed two state solution and he does not want to not have an Israel to keep living in. While talking about his opposition to the impending extention of Israeli law into Judea & Samaria, he told me quite openly and clearly that 99% of the Palestinian Arab population in “the West Bank” just wish Israel would come back and take over again. So what the hell was that protest all about?

Can people really be so out of touch with what is going on today and stuck in old paradigms and propaganda?

Israel won wars waged against us to achieve our extermination. We won. And then we seems to apologize for not having let them get rid of us.

Are we shy? Are we timid? We may have something to learn from Samer, Yoseph and Shadi about self-respect.