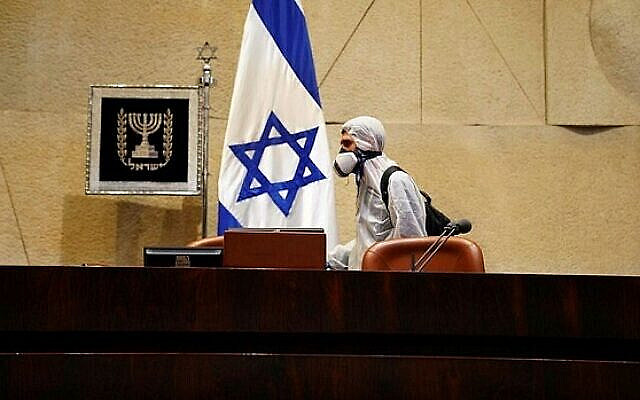 Disinfecting the Knesset ahead of the swearing in of MKs amid the coronavirus crisis, March 16, 2020 (Knesset spokeswoman)

A ZOOM participant in an August 9th meeting of the Knesset Constitution Committee meeting blurted out the offensive slur bat zona (daughter of a whore) during statements made by Dr. Sharon Elroi Price, head of Israel’s Health Service’s, regarding new guidelines for Israel’s coronavirus Green Pass.

Dr. Elroi Price’s husband, Dr. Meir Elroi Price, justifiably tweeted after the meeting that the speaker who cursed his wife and late mother-in-law was a ‘cowardly zero.’ Meir Elroi Price also slammed the Knesset committee’s leader, MK Rabbi Gilad Kariv – former executive director of Israel’s Movement for Reform and Progressive Judaism – for failing to immediately stop the meeting and expel the offender. Rabbi Kariv made do with muting all the ZOOM participants, maintaining that – because the curse was issued on ZOOM – “We do not know who said it or to whom it was said.”

I voted for the new government in which Rabbi Kariv is a member and am a member myself of the movement he led – commonly known in Israel as ‘Reform Judaism.’ I left the Masorti movement in which I grew up to join the Reform movement precisely because of the Reform movement’s pioneering and egalitarian stance on the role of women in Judaism. I am thus deeply disappointed by Rabbi Kariv’s feeble response to blatantly misogynist language that invokes the would-be sexual behavior of a professional public official’s deceased mother. Direct or indirect slut shaming should have no place on the Knesset floor.

I hope that Rabbi Kariv makes good on his lukewarm promise to “check whether we can identify who this is” and ensure that “his path to sitting on this committee or perhaps at all in this house will be blocked.” I applaud Health Minister Nitzan Horowitz’s determined promise to “Identify who cursed Dr. Sharon Elroi Price in the Knesset Constitution Committee…and take immediate steps.” I am not an expert on the inner workings of ZOOM, but I can’t imagine that it would be that difficult to engage ZOOM’s help in identifying the culprit. This is not rocket science.

The foul ‘bat zona‘ bomb dropped after Dr. Elroi Price said that “We need to give these vaccinations time. A lockdown is not a predestined fate to be approached in every case. A lockdown is a tactical measure that helps in reducing illness for a short time.”

One may disagree with Elroi Price’s failure to endorse an immediate lockdown to contain the current wave of delta-variant cases in Israel. There is certainly no lack of disagreement among health professionals around the world regarding the risk/benefit of lockdown. One may support this government wholeheartedly or oppose it vehemently. One may politely and respectfully debate any point of law or government intervention. But we should all speak out loudly and in one voice when a participant in a Knesset meeting addresses a professional advisor and government official in misogynist language that would not be acceptable in an elementary school classroom.

Much has been written about the exodus of professionals and non-professionals in healthcare that results from workers’ exposure to physical and verbal abuse. Health officials like Dr. Elroi Price have been subjected to death threats and demonstrations in front of their homes featuring anti-vaxers wearing yellow stars and carrying pictures of health officials with Hitler moustaches that equate the vaccination drive with the Holocaust. Health care personnel are sacrificing all to protect us in this global pandemic. It is crucial that we protect them from elements like those protestors and the one who attacked Dr. Elroi Price in Knesset of all places!

People on both sides of the political divide must demand a swift and aggressive response to this recent example of ongoing deterioration in the language and behavior in Knesset. Members of the Reform movement in Israel and abroad must demand more from our representative in Knesset and condemn this affront to our values. None of us can medically or ethically afford to stomach words like this in our legislative house.

About the Author
Varda Spiegel was Nurse-Director of the Bedouin Mobile Unit of the Negev, later serving as Maternal-Child Health Director for the Ministry of Health Jerusalem District. I was the English Web Content Manager for the Israel Museum and have translated from Hebrew to English for Haaretz and the ANU Museum of the Jewish People. I'm a grandmother, mother, and beachbum.
Comments