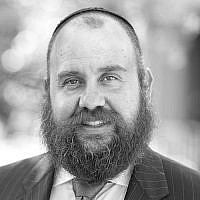 The Blogs
Zalman Myer-Smith
Security for the Community, by the Community.
Apply for a Blog
Advertisement
Please note that the posts on The Blogs are contributed by third parties. The opinions, facts and any media content in them are presented solely by the authors, and neither The Times of Israel nor its partners assume any responsibility for them. Please contact us in case of abuse. In case of abuse,
Report this post.

As a child, I used to love watching “Dad’s Army” a BBC comedy based on WW2 Britain that focuses on the  Home Guard with a host of hilarious characters ridiculing both sides of the War. The long-running comedy was a classic focused on mainly more senior British Army volunteers in a provincial town affected by the stresses of war-torn Britain. They say that the British people mentally and physically survived the Nazi menace ravaging Europe with humor and lot of cups of tea.

Today, modern Britain, yet again, faces a significant menace; that of institutional anti-semitism. Having grown up in the United Kingdom I understood what antisemitism was and if I forgot, there were, at times, reminders from those who don’t like Jews or indeed anyone regarded s different or a foreigner.

One would think that this kind of prejudice is rampant among the ill-educated or lower echelons of society, however, antisemitism permeates all ranks of the social, even those obsessed with social strata. And no one does social ranking better than the British.

Personally, I am a big monarchist. I think there is much to learn about the fortitude and history of the British Crown, but as much of an admirer of Queen Elizabeth II that I am, I would be remiss in ignoring some of the more well known anti-semitic penchants of the upper classes, including senior members of the Royal family, such as the late Princess Margaret among others.

Monarchy is an unelected bloodline and much to the chagrin of republican anti-monarchists who would like to see royalty abolished, they aren’t going anywhere quite soon and indeed have shown amazing steadfastness and resilience through tragedies, losses, and social unrest.

Queen Elizabeth herself has been served by 13 Prime Ministers starting with Winston Churchill and currently with the second female PM, Theresa May. 13 is a lucky number in Jewish tradition, but the potential for the 14th Premier of the UK may be very unlucky for Jews indeed. Jeremy Corbyn, currently the leader of Her Majesty’s opposition & UK Labour party has a very decent chance of forming a government in the future.

The UK has seen a turbulent few years with Brexit, party leadership changes and now clear differences between the Conservatives in power and the Labour Party seeking to play on the weaknesses of the government of the day.

It’s surprising to many, but not to others that Jeremy Corbyn, a Hezbollah supporter, one who claims Hamas is his friend & who equates Zionism to Apartheid has made great efforts to do nothing to address these issues. To say his silence has been deafening would be an understatement. One would think more level-headed party members and shadow ministers would help steer the ship right, however, this is more than an obstinate silence, it’s in polite British terms perhaps a connivance to sweep the ongoing antisemitism crisis under the table.

The Jewish community has made Herculean efforts to reconcile, to discuss and to solve this crisis behind closed doors, and also in public, but to little avail. As with any attempts at progress or communication, one needs both parties to be listening and willing to act & disturbingly that simply is not happening here. Even Jewish friends and former colleagues in the UK who are longtime staunch Labour activists are at a loss.

Jews are acknowledged by the Crown, Government, Business and general communities as a critical part of the fabric of British society. Since 1070 there has been a settling of Jews in the UK with major contributions. Despite one expulsion, there has been relative calm and respect for the plethora of contributions made by the Jewish community towards all aspects of British society.

Why does this storm in a British teacup mean anything to world Jewry? Why should we care?

Well, firstly Britain is a key ally, a stalwart of democracy that houses the Mother of Parliaments and for decades has been a fortress for the democratic leanings of Jews since World War II and even before that time. The Labour Party has been hijacked by self-proclaimed socialists and if that’s your political preference, it’s a democracy and you have choices. The acceptance of anti-semitism and an attempt to bring it into mainstream politics is deplorable and is being heroically fought by a large majority of citizens.

Jews have always focused on chesed (kindness), social justice and equality to all even, at times to their detriment. But even lifelong die-hard Labour supporters are recoiling in horror at the inaction (and by default the encouragement to latent anti-semites) by the current Labour Party Leader and potentially the next Prime Minister of Her Majesty’s Government.

To my American compatriots, a nation of immigrants that I happily belong to –  Don’t think it can’t happen here. the pendulum of politics has swung abnormally on several continents and at some stage in the process Jews have historically been blamed. A recent ADL study showed that anti-semitic attacks just increased in 2017 by over 67%. Those are just the ones which were reported. Twitter recorded 4.2 million Tweets in 2017. This is not progress.

In my daily work, I deal with antisemitic reports, and the increase is palpable. Proponents and protagonists of hate speech and behavior must be outed and held accountable. Free speech is critical to a democratic society that makes informed decisions at the ballot box. however, when political viewpoints become so vile, poisonous and a daily occurrence, we must stand up and react.

UK Jews are being led down a path we have visited only too recently during WW2 with the loss of over 20 million people. Societies the world over need to wake up and smell the putrid scourge of hate and anti-semitism. Nothing good will come out of this and whatever protestations and posturing Mr. Corbyn does to conceal inciting words, behavior, and inaction, we must not view or take his rhetoric and obfuscations lightly.

Hate is hate and an anti-semite is an anti-semite. Thank G-d for organizations like the CST (UK) & the CSO (USA)  who report and collate such information. Accountability will help uphold the truth and we are duty bound to not allow history to repeat itself.

Sadly, for the good guys, it appears, Mr. Corbyn and his cohorts really aren’t kidding.

About the Author
Zalman Myer-Smith is the National Director of www.thecso.org. The Community Security Organization focuses on liaising, training, and working with law enforcement agencies and serving thousands of Jewish community synagogues, schools, and centers.
Comments