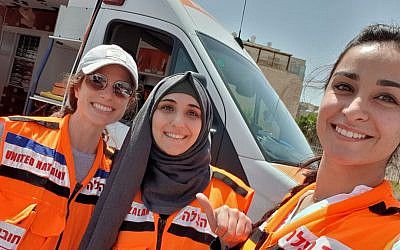 Two weeks ago, I published blog, “Why Israel is Getting Clobbered in the Foreign Press”. I wrote that while Hamas is wonderful at helping the foreign press, presenting Gazans as victims of evil Israelis –- always aiming at the heart, Israel insists on projecting itself as tough, militaristic, and logical –- always aiming at the intellect instead of describing who we are.  https://blogs.timesofisrael.com/why-Israel-is-getting-clobbered-in-the-foreign-press/   Here is who we are.

WE ARE PEOPLE WHO WANT PEACE.

Numerous people have accused Israelis of not wanting peace. They are wrong. The people who most fervently want peace are the those who have lived through the horrors of war.

Four generation of Israelis now have fought in wars to keep Israel from being wiped off the face of the earth.

Four generations of Israeli parents have gone to bed at night worrying about whether their child in the IDF would come home maimed or to be buried.

We know that Iran, Hezbollah, and Hamas between them have 150,000 missiles ready to fire at us. Still, we do not want another war.

WE ARE PEOPLE WHO PROTECT OUR CHILDREN.

The terrorists killed our children in many ways. During the intifadas, terrorists wearing suicide vests  killed children in pizzerias, discotheques,  and markets. Recently, the terrorists  fired rockets, mortars, and other missiles from Gaza. When they did, the IDF retaliated and Hamas was sure to see that pictures of the resulting suffering are shown all over the world. Because Israel does not distribute pictures of suffering Israelis, the foreign press ignored what it is like on the Israeli side of the border.

From the Israeli side, a rocket attack looks very different.  At first, people  are going about their daily lives.  Children play in swings and playgrounds. Other people walk their dogs or just enjoy the beauty around them.

All of a sudden they hear sirens. A red alert sets off a loud sound on their cells phones.  If they are watching TV, they get a warning there, too.  Once they hear the warning,  people have less than a minute to take cover, either in the safe rooms of their homes or in a nearby shelter.  The adults learn  to deal with this, but the children are terrified. Many parents are more worried about getting their children to safety than they are for their own.  In some cases, the people are unable to reach safety.  Mothers have been known to throw their bodies over children to protect them as  best they can.  Often, even after the red alert is over, children are still terrified. Many children who  have been through red alerts over and over again suffer from PTSD for years and have trouble at school as a result.  For the most part, the press, especially the foreign press, ignores these stories of real people.

Though the kibbutzim adjacent to the Gaza border are in an area known as the  “Western Negev,” the kibbutzim are lush and green. Even the bomb shelters, of which there are many, are painted to look beautiful. The contrast between the bomb shelters and the flowers near them is striking.  To the east of the Kibbutzim is Sderot, a city of 25,000 people. Before Hamas took over Gaza in 2007, there was no barrier between Gaza and Israel. There was no blockade. Jews on the Israeli side of the border and Gazans interacted.

Since Hamas took over Gaza, everything has changed. While when things are quiet on the Israeli side of the border, it is wonderful, everyone  knows that at any moment they may hear a red alert.  Despite the horrors of having to live through red alert after red alert, the people who live on the Israeli side of the border stay there.  The reason is simple: it is their home. Some families have lived there for five generations. Their relatives are buried there; their children and grandchildren live there. To many people, it is the only home they have ever known.

WE ARE PEOPLE OF DIFFERENT RELIGIONS AND ETHNICITIES WHO WORK TOGETHER. WE DO NOT LIVE IN AN APARTHEID STATE.

Roughly eighty percent of Israelis are Jewish. Twenty percent are Arabs. Many Israelis are Black. In 2013, Miss Israel, Yityish Aynaw, a Black, Jewish  woman who was born in Ethiopia,  provided a whole new dimension to what it means to look Jewish.

Israel is often accused of being an apartheid state. It is not. I interact with Arabs daily. Recently, I was walking along the Mediterranean Sea when an  Arab woman in hijab wearing Nikes and headphones passed me. It is common to see both Arabs and Jews at the beach.

Here, citizens of every religion and ethnicity have the right to vote, are protected by our Basic Laws, and have reached the highest levels of government, including Israel’s Supreme Court and the IDF. Numerous Arabs are members of the Knesset.

WE ARE PEOPLE FROM ALL OVER THE WORLD.

We are people whose parents and ancestors were forced to flee from all over the world: from Europe, where so many Jews were slaughtered; from Africa and from the Middle East, both of which are now judenfrei, as the Nazis used to say. Israel is a place where it is safe for Jews to be Jews in a democratic country. We have been driven here, and here, with people of all faiths, we will stay.