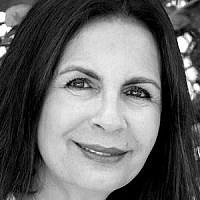 The Blogs
Nava Shoham-Solan
Apply for a Blog
Advertisement
Please note that the posts on The Blogs are contributed by third parties. The opinions, facts and any media content in them are presented solely by the authors, and neither The Times of Israel nor its partners assume any responsibility for them. Please contact us in case of abuse. In case of abuse,
Report this post.

As the media and politicians continue to debate whether or not this is a third Intifada; as the streets of Jerusalem, the City of Gold, become increasingly empty at nights, with the hustle and bustle of tourists and nightlife replaced by heightened security and the flashing blue lights of police cars; voices on the right call for retribution and the left call for withdrawal, all I can think about is the 13 new orphans.

“Who will bless these orphans on Friday night?” asked the Chief Rabbi, moments after the 9 year-old son of Eitam & Naama Henkin recited the Mourners Kaddish over his parents’ open grave.

Thirty-three years ago, I was left behind. I became an IDF widow and a single mother to two young orphans overnight, after my husband fell in a battle to defend our country. While time does heal, the pain will never truly go away and the void will never be filled. Behind every uniform, there is a family waiting at home. Every fallen soldier leaves an entire grieving world behind. My children grew up without their father because he paid the ultimate price for their freedom. This week, Corporal Aharon Bennitta’s family was brutally broken apart, and now his wife and toddler have unwittingly joined a new family, the family of those left behind.

Unlike when I lost my husband, today there is an official organization to support the IDF widows and orphans. We are ready and willing to help them, every step of the way. With the generous help of our supporters worldwide, we are there for them every step of the way. It starts at the Shiva, when we come to comfort them and it continues until the children are all grown up, when we celebrate the birth of their own new families.

Next week, the IDF Widows and Orphans Organization will come together at the Western Wall in the Old City of Jerusalem to celebrate the Bar and Batmitzvah of 45 IDF orphans. The same Western Wall that Corporal Aharon Benitta z”l was on his way to, with his wife and child, when he was brutally murdered in front of them, the same Western Wall that has been drenched with the tears of generations of Jews longing to return to the Land of Israel to live as free men.

As death and destruction continue to strike Israeli, together we will continue to bless the orphans.

About the Author
Nava Shoham-Solan is the Chairperson of the IDF Widows and Orphans Organization. IDF Widows and Orphans Organization is the sole non-profit organization recognized by the State of Israel that represents and supports the widows and orphans of Israel’s fallen soldiers. The organization provides social, emotional and financial support to widows and orphans who have suffered the greatest loss: that of a husband and/or father. From the moment that the family is informed of the tragic news, until the child graduates university, the IDFWO is on hand to support and help those left behind.
Comments