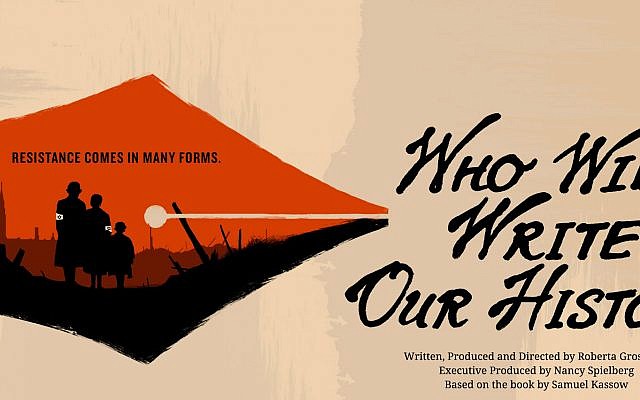 A new movie about Ringelblum, Who Will Write Our History, premiered around the world on Holocaust Memorial Day. The movie points out that most of the pictures and videos we have seen about the Holocaust come from the Nazis. These pictures are designed to humiliate their Jewish subjects and to make them look dirty and worthless. Ringelblum wanted to make sure that we did not have to rely on these pictures to tell the story of what happened to the Jews.

Dr. Emanuel Ringelblum was a well-known historian in Warsaw with a strong belief in history as the story of people, not merely of governmental actions. He assembled about him a varied group of individuals tasked with recording the experience of the people in the ghetto. His goal was to make “a photograph of life. Not literature but science.”[1] He wanted to show the Jews in the ghetto from a human perspective.

They collected physical evidence: proclamations, advertisements, official and underground newspapers, artwork, ration cards, candy wrappers, everything they could find. Perhaps more importantly, they also gathered observations. They wrote diaries about daily life in the ghetto, what they heard, what they saw, and the stories they were told. “Everyone wrote,” Ringelblum recorded. “Journalists and writers, of course, but also teachers, public men, young people – even children.”[2]

Their writings are a revelation. They tell of lives lived simultaneously in despair and in hope. Of fighting to find meaning and the strength to go on. Of recognizing the difficulty of saving anyone from starvation but insisting on the need to try. They tell of struggling to simply hold one’s head up but continuing to believe in the ability of culture and art and literature to help you survive. And they tell of murder and genocide, of atrocities committed in the ghetto and out of it. They are eye-witness accounts recorded in real time, and they are devastating.

The core group who created the archive worked with Ringelblum at Aleynhilf, a Jewish organization that helped refugees as they came into the ghetto. This gave them a good position from which to record the stories of the people.

With the refugees came stories of the atrocities happening in other areas under German control, stories of mass murder, of killing pits and of gas chambers. The movie’s depiction of the archivists’ blasted, shocked response to this news echoes our own response.

This news reinvigorated their purpose. They knew they must record not only their stories but the evidence of these crimes. They did this so that we would be able to tell their story from their perspective, not from the Nazis’ perspective.

The words we use frame the story we hear

So it is disappointing to me how much we continue to let the Nazis frame every aspect of this story. As the movie points out, their framing shows up in the pictures we use: pictures of Jews being humiliated and starved and murdered, all without apparent resistance. But it’s more insidious than that. Their framing of the story even shows up in the words we use to talk about the Holocaust.

Take the term “Final Solution.” This is what the Nazis called their plan to murder the Jews in killing pits and gas chambers. Built into the phrase “Final Solution” is the idea that the Jews were a problem in need of a solution. We may not like their solution, but by using this phrase, we implicitly accept the idea that a solution was needed. What should we call it instead? Call it what it was: their “Roadmap to Genocide.”

All of the phrasing we use seems intended to obscure the actual crime being committed. History books talk about the ghettos being “liquidated.” Liquidation is something you do to inventory, not people. People are murdered. They describe the people as being “deported” to “concentration camps.” Deportation implies people being sent out of the country to someplace else where they will be safe. This was not deportation, it was mass kidnapping. “Concentration camp” gives the impression that the Germans were simply relocating the Jews to be with their own kind, concentrating them in one place. These were not concentration camps, they were slave labor and death camps. We should not let our history books continue to use the Nazis’ words. We should instead call all of these what they were: preludes to murder.

Even in talking about their deaths, we fail to call the perpetrators out for what they did. We talk about people dying in the gas chambers or the killing pits, as if this was no different from dying in your bed. We talk about people who “did not survive” the camps or ghettos, as if no one was at fault. Once again, we forget to call it what it was: murder.

Millions of people were kidnapped and murdered in forests, in slave labor camps, and in death camps. Sanitizing the language sanitizes the crime.

For more information on how to teach the Holocaust from a Jewish perspective, see www.TeachTheShoah.org.

[1] From a note Ringelblum deposited in the archive in 1942. https://newrepublic.com/article/64732/what-we-know-about-murdered-peoples.