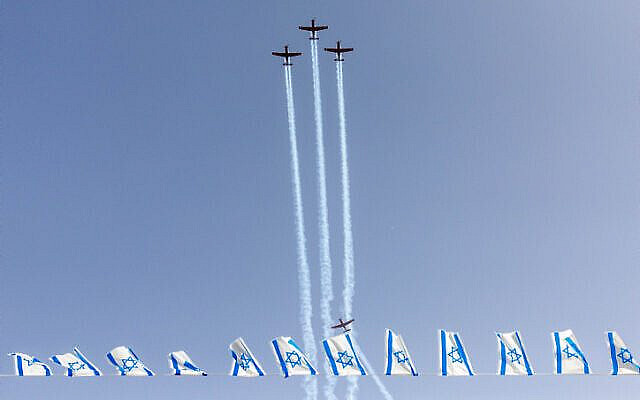 Israel’s air force aerobatic team flies during training for an Independence Day flyover in Jerusalem, on May 3, 2022. (Yonatan Sindel/Flash90)

Israelis take wonderous events for granted every single day. These events and phenomenon would seem miraculous to our great-grandparents and they barely cause us to turn our heads. From Hebrew street signs to thousands of yeshivot, our ancestors would never have dreamed of the multiple wonders that today’s Israel boasts. Join me as I list 74 wonders and ask – Who would ever have thought?

Who would ever have thought,

2. A people who had stopped speaking its ancient language would revive it?

3. Israel would become the center of the Torah world again so soon, with more people studying Torah today in Israel than ever before in Jewish history?

4. Jews could freely visit Ma’arat Hamachpielah in Hebron and pray at the graves of the “Mamas and the Pappas?”

6. Shemittah, Terumah and Maasrot, and all the other mitzvot that can only be done in Israel would become just as practical as putting on tzitzit and lighting Shabbat candles?

7. At the end of the Passover Seder we’d have to explain to our children what, “Next Year in Jerusalem” means, because they’re already sitting in Jerusalem?

8. Our tragedies would be the past, our celebrations are the present, and our future is brighter than ever?

9. Jerusalem would be filled with the sound of joy of brides and grooms in our day?

10. The flag of Israel would fly high over the land of Israel?

12. Jews from all over the world have the right to return to their homeland whenever they want, and Israel will pay for the plane ticket?

14. The Jewish people would rule over their land in a third commonwealth in our lifetime?

15. The Jewish army would be one of the most powerful in the world?

16. Masada, a mountain of great Jewish tragedy would transform itself into a symbol of Jewish triumph?

18. Israel would be the world’s strongest country’s ally, partnering with the United States in hundreds of areas?

19. Jews would furiously debate what form of Hallel should be said on Israeli Independence Day?

20. There would be an Israeli Independence Day?

21. Israel would invent a pill with a camera, helping doctors see internal problems without conducting surgery?

22. Street signs would be written in Hebrew?

23. Israel would be the destination of over a million Soviet Jews, when they were freed?

24. Israel would discover and save Ethiopian Jews, long thought lost to the sands of time?

25. Israel could pull off a daring rescue 900 KM away from its land when its people were hijacked to Entebbe?

26. Israel would reunite its divided capital, Jerusalem, swearing to forever keep it united?

27. The Israeli people would boast some of the best and brightest noble prize winners?

28. A Jewish nation would develop farming technology that would save the world from famine?

29. The world would look to Israel for help when it suffered natural disasters and tragedy?

30. Israel would have one of the first female leaders in the world?

32. Jews would fight militarily as a nation to reclaim and then defend their land?

33. Israel would make the desert bloom in seemingly impossible ways?

34. Israel figured out how to grow dates from seeds that are 1400 years old?

35. More than half of Israel’s land mass is desert, but it boasts some of the most efficient farms in the world?

37. Israel would develop over 300 wineries, some of them producing world famous wines?

38. Denied at first, Israel would reclaim Judea and Samaria in a daring war in 1967?

39. Israel would draw over $10 billion in global investment, as business leaders around the world want to partner with Israel?

40. There would be more yeshivot and kollelim in Israel than ever were in Europe or Bavel?

41. Israel would create BioBee, a system that protects crops from bugs, without using harmful pesticides?

43. The Israeli Baseball team (!) would make the Olympics?

44. Over three million Jews would move to Israel?

45. The Foreign Ministers of multiple Arab countries would meet, at a Conference, with an Israeli leader, in Israel?

46. American Presidents, the leaders of the free world, would come to Israel to visit?

47. Israel’s Parliament, the Knesset, would have 120 seats because it’s modeled after the Second Temple-era Anshei Knesset HaGedolah (the Great Assembly)?

48. Israel’s weekly second free day would be Friday, and not Sunday, so that Jews can prepare for Shabbat?

49. When Jews are in trouble, whether under rubble in Surfside, Florida or fleeing war in Ukraine, it is the Israeli flag they see when they’re first rescued?

50. During Passover in Israel, it’s illegal for stores to sell chametz?

51. Israelis would create a social and community-based navigation system the whole would use, called Waze?

52. Israel is approaching ten million residents and the majority of the world’s Jews live in Israel? (Probably)

53. The noise of Sukkahs being built can be heard once again throughout Eretz Yisrael in the days following Yom Kippur?

54. In Israel, the Jewish calendar date can be used on contracts, legal documents and checks?

55. Israel has figured out how to make it rain from the air?

57. Israel figured out how to make honey without bees?

58. Israel has more museums per capita than any other country in the world?

59. Foreigners, even in Arab lands, would learn Hebrew so they could talk to Jews in their own language?

60. Israel’s economy is so strong it made a law that it can’t accept economic aid from foreign countries?

61. An Israeli would discover quasicrystals? (Be honest, you’re not sure if this one is fake)

62. An Israeli woman would be known as Wonderwoman all around the world?

63. The glue on Israel’s postage stamps would be marked Kosher, and so would its army?

64. Israel wants Jewish babies so badly, it pays for a the first two invitro fertilization sessions?

65. Israeli cows produce more milk than cows anywhere else in the world?

66. Muslim Arabs would serve as soldiers and pilots in a Jewish army?

67. Some of the best restaurants in the world would be opened in Israel?

68. Luscious fruits and vegetables would once again grow in Israel, even before Moshiach arrived?

69. Israel would have its own airline and it would have minyanim and Torah reading midflight?

70. Jews from all four corners of the world would study Torah together in Israel and serve together in its army?

71. Zionism, once equated by the world to racism, would be a movement its adherents loudly proclaim a massive success?

72. Israel grants religious freedom to all the world’s religions?

74. Israel, a tiny country with few natural resources, would last 74 years and become the thriving success story we’re so proud to call home?

As I drive through Jerusalem each morning from my Torah study session with my son Moshe to my office at Nefesh B’Nefesh, I frequently think of my great-grandparents, murdered in the gas chambers of Auschwitz. Could they have even dreamed of the life their descendants live? I don’t think they could’ve even imagined it, and if they saw it, they wouldn’t believe it. As we celebrate Israel’s 74th birthday, lets be grateful for the dream we live every single day!