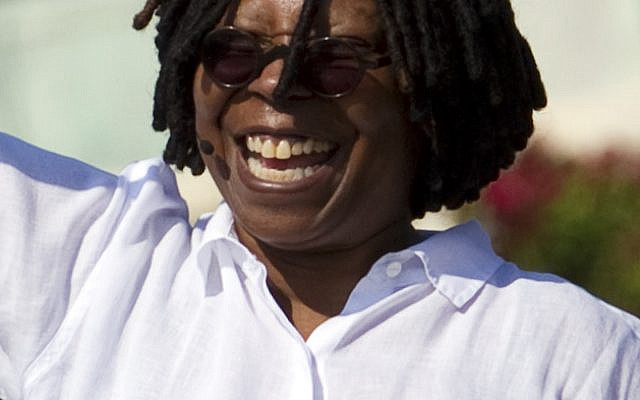 I’ve been looking for a name for one of the more irritating fallacies demonstrated by antisemites on the left side of the spectrum. Whoopi Goldberg just solved that problem for me.

Whoopi’s Fallacy: the erroneous categorization of all Jews as “white” resulting in:

Whoopi demonstrated a gross level of historical ignorance in her insistence that the Holocaust had nothing to do with race and was “white people doing it to white people.” The briefest study of Germany’s Third Reich should present terms such as “master race” and “eugenics” and “Aryanization.” Hitler’s program to exterminate Jews, Gypsies, Communists, the handicapped: all of this was in promotion of weeding out undesirable genes to form a perfect, Master Race. I feel that most of the world probably knows this already, but given Whoopi’s staggering level of ignorance and her highly public platform, it bears reminding.

Jews do not fit neatly into discussions of race, ethnicity, and discrimination. We do not fall easily into the buckets and molds on which proponents of ethnic studies and Critical Race Theory rely. As we often do, we inconveniently complicate models posited by these fields and by those who seek to rectify wrongs heaped upon the “Other” or the outsider.

In doing so, we end up tossed in with the powerful majority under these theories, and I think the daily antisemitic acts of violence and desecration in our newsfeeds palpably demonstrate that is untrue.

Jews live with an inherent identity crisis on a daily basis. Are we only a religion? A race? An ethnicity? For purposes of Title VI of the Civil Rights Act of 1964, we are treated as a nationality or race. Hitler certainly viewed us as a separate race, using it as a basis for our extermination. Ask any Russian Jewish American, and they will tell you that their identity cards in the former Soviet Union identified their nationality as that of “Jew.” All those fun DNA tests people take to determine their background? They have categories for Ashkenazi and Mizrachi Jews based on genetics.

The upshot is, we do not know what we are, although the world around us continually defines our identity without asking anyway. We cannot be easily defined or pigeonholed to fit the binary, black-and-white mold with which Whoopi and her ilk view the world.

Whoopi’s Fallacy is an inherently uncritical way of thinking. The Whoopi Fallacy allows others to recast Jews into an unrecognizable body wholly divorced from our actual history and identity.

Whoopi’s Fallacy leads us down the path of those on the left who would define Jews as not only “white” but also all of the imputed concepts that accompany that categorization: powerful; privileged; rich; global manipulators; oppressors of others; racists; colonialists; and imperialists.

Under Whoopi’s Fallacy, Jews are not entitled to a safe space. In fact, under her model, Jews would be lumped together with those on the far right who still cling to Nazi concepts of racial purity and despise us for not belonging in that category. As usual, it’s a lose-lose scenario for the Jews.

Whoopi’s Fallacy plays directly into the hands of anti-Zionists who would recast Israel as a white, colonial, imperialist movement. It would mindlessly adopt the lies peddled by the Boycott, Divestment, and Sanctions (BDS) movement. It would strip Jews of their indigeneity to the land of Israel, despite thousands of years of archaeological records and a continuous Jewish presence in the land.

Whoopi’s Fallacy literally erases the existence of millions of Jews from Arab countries, Iran, Africa, and Asia. People whose skin visibly is not white. They constitute more than half the population of Israel. But people listening to her driveling nonsense on national television would think that Israelis are all white Europeans and buy into BDS’s antisemitic lumping of all Jews into one category for the purpose of undermining Israel’s right to exist.

Casting Jews as white and powerful is reductionist and dismissive. It is as antisemitic as one can get.

Jews do not owe the world an apology for throwing a wrench in overly simplistic, popular models of race and ethnic construction. We do not owe the world an answer for what or who we are. We are complex. We are thousands of years in the making. And we do not subscribe to Whoopi’s definition of who we are any more than we subscribed to Hitler’s highly racial understanding.