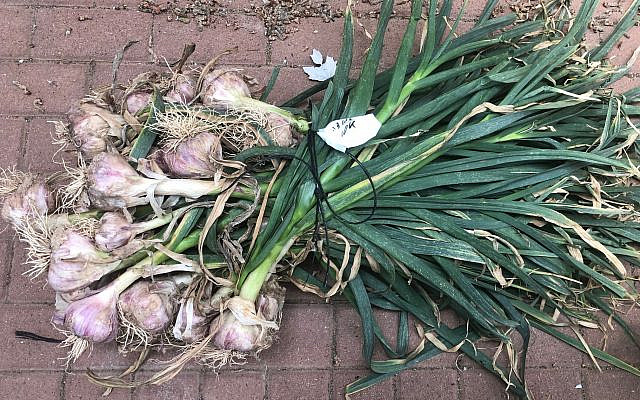 I snapped on my disposable gloves as I walked into my little local grocery store and asked the cashier at the door if there were any eggs. I laughed, to show her I was joking. She’d just sent out an exasperated bold-faced message to our entire town that there were no eggs in the store — yes, not even organic — and could we all please stop asking her! She laughed, kinda, I guess I wasn’t the first to make that joke.

But I wasn’t joking, of course, and as I scanned the little market’s shelves, I hoped beyond hope that I’d find some eggs. There weren’t any, as expected. But what I hadn’t expected was a run on garlic.

For three of my college years, I’d worked at a hippy-dippy food co-op in Bloomington, Indiana. Before every snow storm, students and townspeople would come in for four things: toilet paper, eggs, milk, and bread. Here in Israel, where families such as mine are not not unusual — we have six kids, and two dogs — we’re feeling the run on the first two: TP and eggs. Curiously, there’s still plenty of milk, and frankly, before Passover, I’m not sure anyone is buying much bread.

When I got back home — egg and garlic-less, of course — I saw that the neighborhood WhatsApp group was advertising a new crop of farmers’ wares. Among them, garlic, at the reasonable price of NIS 9 a kilo. Thinking, wow, a kilo is a lot, but okay, everyone’s hoarding a bit these days, I wrote the farmer and asked for a whole kilo. She immediately wrote back saying there is a 10 kilo minimum. Ten kilos of garlic!!! But then I imagined a life without garlic, and said what the hell. I ordered it. 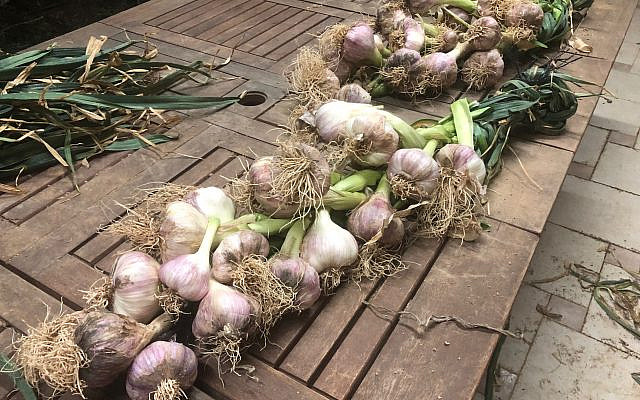 Yesterday, I picked up my sheaf of garlic. I grew up in the suburbs of Vancouver and Indianapolis and can definitely pick out a corn or soy bean field a mile away. But I’d never put much thought into the life cycle of garlic. I’d imagined receiving a cardboard box, filled to the brim with garlic heads, covered by gleaming white delicate skin. My fragrant, massive, dirty, green leafy bundle did hold about 40 heads. But they were dwarfed by their stalks and leaves.

Bemused, I photographed the twine-tied bundle and posted the images to Facebook, joking, “Vampires, check. What’s next?” Several kindred spirits asked for the number of the farmer. And my little brother sent a recipe for garlic greens.

Last night, my oldest son and I watched a YouTube video “How to braid garlic (THE EASY WAY),” and we plucked off all the extraneous greenery. We stood outside our house, him wearing his Gay Nation rainbow tank top and a pair of shorts, me, shivering under two layers of clothing, while he twisted the long stems as I made him laugh and gave him morale support. He hung up one braid in the kitchen. The other went to a friend. 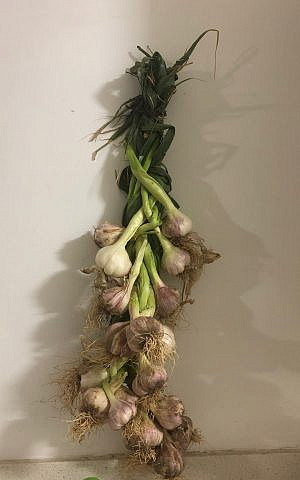 When I spoke to my mother in law last night, she’d seen my Facebook post and suggested I freeze some of the cloves. Aunt Ahuva, whose house she’s staying in, called out in the background that I should grind them up in olive oil first to make my own garlic spice cubes. Doda Ahuva has sensible suggestions in all possible situations.

But I realized that my olive oil is running low — along with almost everything else in my kitchen.
Searching through the neighborhood Whatsapp group, I saw the possibility to order from a number of other farmers. And I did.

So this morning, after I carefully washed and roasting my garlic leaves (and then cooking them again in the pressure cooker — those suckers sure are tough), I received word that my vegetable order had arrived. My oldest son and I walked over to the smiling neighbor whose house was the designated drop off point to pick up my three cabbages, two lettuces, basil, parsley, celery, and mangold leaves.

About an hour later, another neighbor dropped off our shared order from another farmer, with four boxes of strawberries, three small pineapples, a box of mini-peppers and some cherry tomatoes. We have a local farmer’s goat cheese, another farmer’s olive oil, and some homemade gefilte fish on order, too. 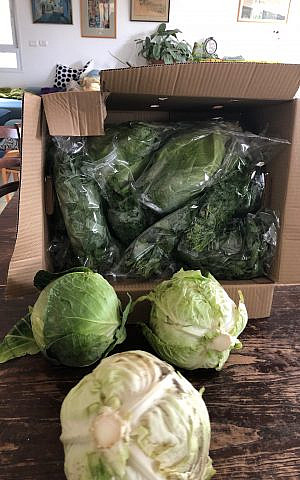 But miracle of miracles, a neighbor announced she was organizing an egg delivery — if she could get to 150 flats of 30 eggs each. I immediately ordered four flats and within two hours, she’d reached 400, before closing the list to many others. I happily paid for the 120 eggs and live in hope that they’ll arrive before Shabbat. Or at all. We’re still missing some bureaucratic permissions.

Now, I’m the hunter-gatherer of the family, and to tell you the truth, my husband has been a bit aghast at my new farm-to-table purchases. But as I triumphantly told him I’d solved our egg problem, he told me that he’d also asked a friend’s wife who works at a supermarket in Jerusalem to put some to the side. He’d just received word that she was holding 4 dozen eggs for us.

“Should I tell her to put them back?” he asked.

About the Author
Amanda Borschel-Dan lives in Israel, where she and her husband are raising their six always hungry children. She is The Times of Israel's Jewish World editor.
Related Topics
Related Posts
Amanda B. Dan
Comments