The reason I think I’m in a good position to do this is that I’m a lesbian and an Orthodox Jew, and I’ve been opposed to having a pride parade in Jerusalem since the first time it was proposed.  And even back in the US, I haven’t been to a pride parade since 2002.  But I have many friends, including my partner of almost 20 years, who disagree.  Who feel that pride parades are a positive thing, even in Jerusalem.

So why do people want pride parades?  What is their motivation?  I can only speak about the motivations that I’ve actually seen people express.  Here are some of those reasons (in no particular order):

And why do people oppose pride parades?  Again, this is based on what I’ve seen and heard people express.  Here are the main ones (also in no particular order):

There may be other reasons on both sides, but in my experience, those are the main ones.

And there are two problems here.  One is that people on each side think that their motivation for their position is reflective of everyone who shares their position.  People who want a pride parade because it makes them feel safe or because their friends are going often ignore or deny the fact that others are in it because it bothers other people.  And people who are opposed to a pride parade because they feel it’s unnecessary tend to ignore or deny the fact that a lot of the opposition stems from personal distaste, and even hatred.

And so you have groups like Lehava demonstrating across from the Jerusalem Pride parade with enormous signs saying, “Jerusalem is not Sodom!”  And you have people like a friend of mine on Facebook posting things like “Next year we shall march through Meah Shearim and finish with a prayer at the Western Wall.”  Both of these are appalling.  Both of these are incredibly self-centered, because they only consider their own feelings, and explicitly ignore the feelings of everyone else.  They demonstrate an utter lack of caring about why the other side feels the way they do.

If the people planning these parades were to take seriously the fact that their opponents really think they’re trying to promote sin — even if they know that’s not their intention — they would be more sensitive in the way they plan them.

And if the people who are so strongly opposed to the parades were to take seriously the fact that most of the people who want them have no interest in promoting anything, but simply want to have a chance to socialize with others who share this experience with them, in a non-threatening environment, maybe they would be less extreme in their opposition.

I was going to end here, with that observation, but I want to relate my experience observing the Jerusalem Pride parade yesterday.

As I said, I’ve always been against having the parade in Jerusalem.  Because my experience of these parades is of unleashed promiscuity and raunchy, half-naked displays.  Both my partner and other friends have told me that the Jerusalem parade is nothing like that, but I was skeptical.

This year, I decided that being skeptical about something when it’s within my power to find out one way or the other is intellectually lazy.  So I went.  I didn’t walk in the parade; I stood on the other side of the police barricades watching as more than 22 thousand people walked past me.

And here’s what I saw.

At the very front of the parade, as they exited Liberty Bell Park, were three offensive displays.  One was an anti-circumcision demonstrator, while the other two held offensive and sexually explicit signs.  All three were prevented (I believe by the parade organizers) from continuing on with the parade.

The closest I saw to promiscuity was about a dozen cases of people holding hands.  But most of those were male-female couples.  And one was a pair of sisters.  The only kiss I saw was two people in a photo published today, who were clearly asked to kiss by the photographer.

I stood there for over an hour, watching the unending flood of people streaming by.  I saw four men in various levels of drag.  And I read every sign I could see, looking for something offensive.  A couple of women from Bat Kol, a group of Orthodox Jewish lesbians, handed me a little packet with two tea lights and the blessing over the candles for Friday evening. 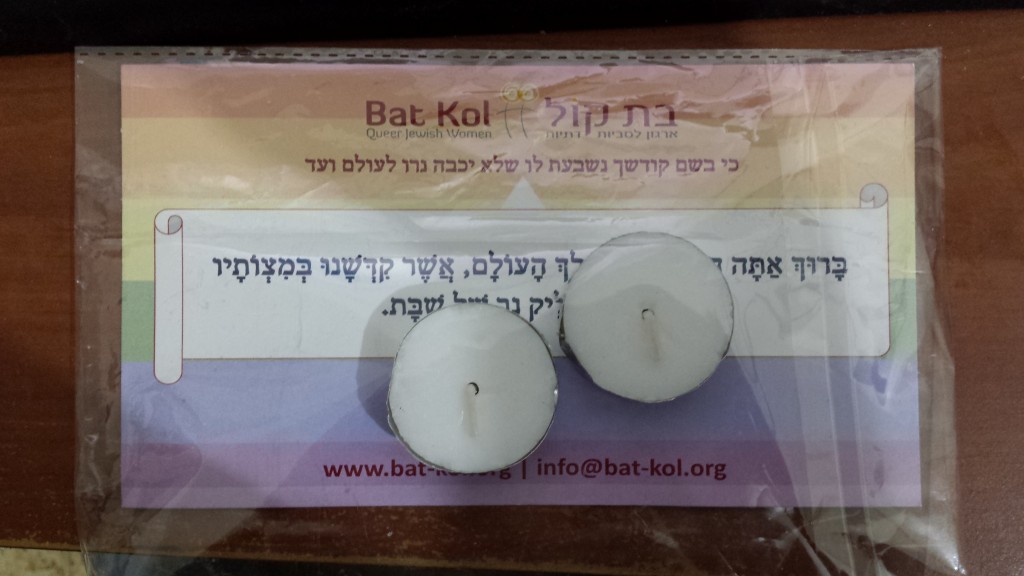 Shabbat candles handed out by Bat Kol, an organization of Orthodox Jewish lesbians, at the Jerusalem Pride parade.

There were vast numbers of kippot wearing men.  A not insignificant number of babies, some in strollers and some being carried.  Women wearing skirts or dresses.  And many of the marchers carried a flower, intended to be placed at the spot where 16 year old Shira Banki a”h was murdered two years ago in this very same parade.

Had it not been for the flags and signs and the stickers that people had placed on their shirts with slogans like “Proud to struggle for equality” and “Love your neighbor as yourself”, it would have been very hard to tell that this was a pride parade at all.  Certainly no one who has ever been to a pride parade elsewhere would have recognized it as such.

So I have to ask myself a question.  A question that others might want to ask themselves as well.  Had the main pride parade not been in Jerusalem, but rather in Tel Aviv, where there is quite a bit of promiscuity and non-family-friendly displays, would that have been better?  Certainly, it would have made some people more comfortable not to have to see anything having to do with (eww) homosexuals, but on the whole, this parade was far more in tune with Jewish values than any other pride parade anywhere else.  Perhaps, rather than the parade bringing the holiness of Jerusalem down, the holiness of Jerusalem raised the parade up.

About the Author
Lisa Liel lives in Karmiel with her family. She is a member of the Zehut party, works as a programmer/developer, reads a lot, watches too much TV, does research in Bronze/Iron Age archaeology of the Middle East, and argues a lot on Facebook.
Comments