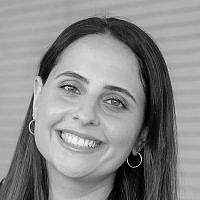 The Blogs
Omer Mucznik
Apply for a Blog
Please note that the posts on The Blogs are contributed by third parties. The opinions, facts and any media content in them are presented solely by the authors, and neither The Times of Israel nor its partners assume any responsibility for them. Please contact us in case of abuse. In case of abuse,
Report this post.

COVID-19 forced the world to press the “pause button” in our lives, making us to stop everything we do and stay home. After a long period of self-reflection, I decided to reexamine my years as a student, my life, my job and daily routine. This reflection, alongside my unpaid leave, led me to the conclusion that university students are destined to be poor.  If one wishes to be a successful hard-working student, the center of his life is concentrated around his studies, his social life concentrates on weekends, and in between, he has to find time to work. This fact leads most students to work a job that allows them to work shifts, allowing them to study in the mornings and work in the evening, just to earn some money to “get by”. These unfortunate facts lead most of us to work fewer hours than we wish, and receiving low incomes, which forces us to be financially dependent on our parents.

Today, most Israeli students work in jobs such as waitressing, security, receptionists or service representatives and few of the students succeed in high-tech companies or other organizations as part-time workers. What happened to those fields during the COVID-19 outbreak? Did they continue to function normally? The answer is NO. These jobs were the first to go, and many of them will be the last to come back. Remember the financial dependence I mentioned earlier? It became even worse.

While the economic situation of a good portion of the students was already shaky, the COVID-19 made it even shakier, most fields where students find the easiest to work at had to shut down, forcing most of their employees to go home to an unpaid leave, or unpaid vacation, which was definitely not a vacation. As we use the word “unpaid” I will mention that Israel allowed those who work over 6 months to receive unemployment benefits from social security. What exactly are those benefits? Usually, 60% of your average salary throughout the past year, that too, as I have already noted, was usually very low.

Alongside students losing their jobs, the entire job market was severely hurt. As of the end of May, there were around 984,000 people in Israel who lost their jobs – 250,000 were laid off and the rest were sent to an unpaid leave. According to the data published by the Employment Bureau, it appears that workers under the age of 34 are the most affected by the COVID-19 crisis. According to the data, employees of this group make up 47.4% of those who were forced to take an unpaid leave, and 44.7% of all employed persons who have left the labor market. Data also indicates that a large part are students who work as temporary workers, and will struggle finding a different job that will go hand in hand with their studies.

The outbreak created an even more vicious circle – the young students who are trapped at home, probably studying via Zoom (and paying full tuition – but that’s for a different day), who lost their only possible source for income that will allow them to keep focusing on their studies. Furthermore, we can assume that even those who were lucky enough to have their parents financial support, find it now much more difficult since many Israeli’s salary, not only students, were taken a hit.

One more point I would like to highlight is the fact that while Israel experienced a severe economic crisis due to the spread of the virus, including more than one million citizens losing their jobs and thousands of small business owners are left without a living, only a minority of Knesset members agreed to a salary cut. At the same time, the government grew to an unprecedented size, with new ministries with all the relevant expenses. As a student who aspires to make a difference in the world, and works hard to make this dream come true, alongside working and trying to save money, I personally expect our leaders to take action to allow students to support themselves while furthering their education.

About the Author
Omer Mucznik, 26, was born and raised in Tel Aviv and is a 4th year Law and Government student at IDC Herzliya.
Related Topics
Related Posts
Comments