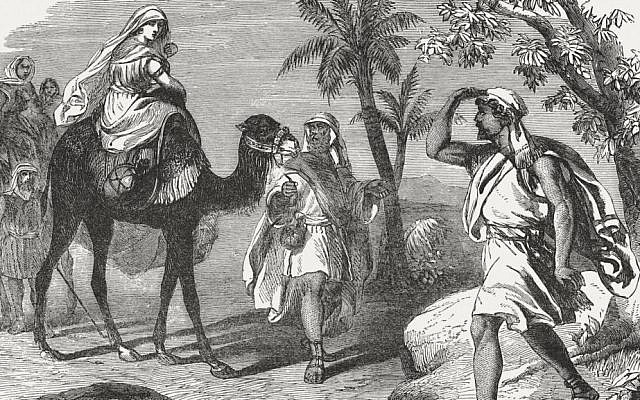 Why does the Torah specifically utilize a veil in the stories of Rivka and Tamar without explaining its importance? How is it not superfluous?

When Rivka is brought from her family home in Aram to her betrothed in the land of Canaan, she reveals an intriguing cultural nuance. Upon seeing her future husband she covers her face with a veil in a curious haste to conceal herself (Breishit 24:65). The only other time in the Torah when a veil is referenced is in the story of Yehuda and Tamar (38:14,19) with similarly conspicuous cultural overtones that escape our contemporary sensibilities. The Torah provides no context for the reader to appreciate the role of the veil, likely because its import is self-evident; to conceal the woman’s face. However obvious, the specific mention of the veil is superfluous relative to the succinctness of simply stating its purpose. The Torah could have said Rivka was modest and Tamar was disguised. Obviously, the veil itself has importance for the reader.

The lesson of the veil and its lack of included explanation implies its meaning was ubiquitously appreciated to the ancient reader. The modern reader is left to wonder if the veracity of our interpretive power is hindered by our lack of cultural context [1]. To suss out the meaning of such elusive details, one must realize that the societal reality of the patriarchs was dictated by the dominant power of their time. We can never know for certain but through careful comparison to known law codes from the ancient Near East, we can hope to glean a sense of that long forgotten culture.

Specifically, the Middle Assyrian Law code (MAL) from the time of Tiglath-Pileser I, dating back to as early as the 15th century BCE, just after the time of Rivka and Yitzchak’s betrothal [2]. This legal system would have been implemented in the region of Aram and possibly extended in some form to the land of Canaan as well. MAL tablet A 40 describes that ‘daughters of status’ must have their heads covered as well as cover their face with a veil.

Applying this law to the story reveals intriguing insights otherwise lost to history. Prior to arriving at the home of Yitzchak, the entire story unfolds at the home of Betuel. A private residence where head coverings and veils would be unnecessary. The only other time Rivka was in public was at the well at which point it is clear that she is not veiled as she is perceived as beautiful (24:16). This would imply that Betuel was not a man of status in his community, therefore his daughter did not require a veil. This further explains why Rivka was obtaining the water rather than a servant. Later, riding through the desert was private enough that Rivka was permitted to have her face exposed. But as soon as she came upon Yitzchak in public, as a newly betrothed woman, she hastily covered up.

Not only was this a legal expectation, it carried with it hierarchical import. MAL 40 also stipulates that women of lower status were forbidden to wear a veil, in specific slaves and harlots. In fact, for them to be covered by a veil was a criminal offense and required strict and immediate redress. While this punitive threat was likely not Rivka’s concern, she was likely very concerned about the perceptual consequences. Should Yitzchak see her without a veil, even from far off, he might have concluded her to have been a slave girl or a harlot. Potentially tainting his interest in her as an eligible wife. She would certainly not want her first interaction with her future betrothed to have him confuse her with a woman of lower social status. Especially in light of the social ascent she was now experiencing from her lower social status in the home of Betuel. This might better explain her haste to halt her approach and identify who Yitzchak was, as well as cover up, well before meeting him (24:64-65). Similarly, this would be why it was important for the reader to know that Yitzchak saw them from afar but could only make out the camels (24:63).

The value of understanding the legal implication of veils extends as well to explain the veil’s role in the story of Tamar and Yehuda; the only other appearance of the term in the Torah. A superficial reading of the story reveals the distinction between zona and kadesha likely rested on the social acceptability of the two professions. As is well known in the ancient world, there existed sacred prostitutes, termed hierodules. These women served an official purpose, often of pagan veneration, and were an accepted presence with privileged social status. Nonsacred prostitution still existed, termed harlots, however were significantly less accepted and those women held a different social status.

These events are particularly revealing when enlightened by MAL 40 which declares that a hierodule ‘must be veiled on the street’ [3] and a harlot ‘is not to be veiled.’ To emphasize the importance of this distinction between the hierodule and the harlot, if a harlot wears a veil she is to be severely punished. Further still, anyone who does not report to the authorities a veiled harlot is likewise severely punished. Clearly, being a hierodule carried such social importance that feigning one was a threat to the public, and the frequency of this taboo was so common that a law had to be enforced to discourage its practice.

Understanding MAL 40 explains why it was important that the Torah specifically informs us that Yehuda understood Tamar as a harlot (38:15), despite seeing her in a veil. The veil wasn’t simply a disguise for Tamar, it served as a professional marker. Combined with the text certifying that Yehuda saw her as a harlot, despite the veil, confirms for the reader that he understood her as a false hierodule and had no blasphemous intentions; as would be expected of the children of Israel. This might also explain the discussion of payment, presumably superfluous for a hierodule (38:16-18). More subtly, the lack of precautions despite being in public view implies that he was confident of his safety allowing a veiled harlot to escape justice.

This also explains why he told his Adullamite friend to retrieve his collateral from the ‘woman’ (38:20) as they both understood the social taboo that had transpired, as collateral was likely not utilized when obtaining the services of a hierodule. Likewise, this is why the Adullamite asks for her in public as a kadesha, a hierodule, the correct term for how she would have superficially appeared and was socially acceptable (38:21-22). Further still, this explains why Yehuda was so willing to forgo his personal effects lest he be ‘brought to shame’ (38:23) and cease pursuit of his harlot in what was quickly becoming a very public display of his transgression. Yehuda knew that as long as he ceased his search there was no risk of his harlot revealing him as having failed to pay for services. Should she seek retribution from the authorities, she would risk revealing herself as a false hierodule and they might both be in serious trouble.

An intriguing nuance to the story lends even greater credence to this cultural perspective. Tamar is veiled in contradistinction to her ‘clothing of widowhood’ (38:14,19), seemingly implying that as a widow she does not need to be veiled. This is consistent with the explicit reading of MAL 40 which requires a widow to have her head covered but has no requirement of a veil.

Obviously, the conclusions of this process are strongly assumption driven, however the author feels that they derive a more satisfactory elucidation of the text than a culturally neutral perspective, which strongly supports its value.

[2] The story’s potential dates range from between 1675-1652 BCE. This assumes, at its earliest, that the story of Rivka’s arrival coincides precisely with the year of Sarah’s death when Yitzchak was 37.