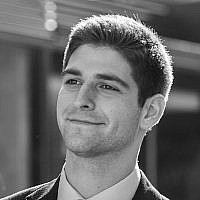 The Blogs
Benjamin Brent
Apply for a Blog
Please note that the posts on The Blogs are contributed by third parties. The opinions, facts and any media content in them are presented solely by the authors, and neither The Times of Israel nor its partners assume any responsibility for them. Please contact us in case of abuse. In case of abuse,
Report this post.

Those who define themselves as anti-Israel often find themselves defending their stance against accusations of anti-Semitism. To be clear, few view legitimate criticism of policies or actions taken by the government as anti-Semitic. If you need proof, go ask any Israeli if they think their government is perfect. Identifying as anti-Israel, however, goes further than voicing legitimate criticism. It is inherently antisemitic because it is the opposition — on principle — to not only Israel’s government but also to the people, the culture, the history, and the legitimacy of the country as a whole. That is what is truly meant when one uses anti-Israel rhetoric correctly.

There is no other country with which we are so careless in blurring the line between criticism of the government and of the opposition to the country itself. We live in a modern world where words matter. We must be aware of the connotations that our statements carry. Let us contrast the language used by those critical of the Israeli government’s behavior in the complex conflict with the Palestinians with the language used about China: universally agreed to be one of the worst perpetrators of human rights violations of our time. While many people stand against the authoritarian regime in China and call for the end of their extensive human rights violations, no one disputes China’s fundamental right to exist or defend itself and its citizens, so no one brands themselves as ‘anti-China’. Similarly, holding the Chinese people responsible for their government’s actions is illogical and clearly racist. Unfortunately, this logic is not applied to the dialogue surrounding the Jewish State. Why, in this respect, is the Jewish state’s situation different from China’s if not due to underlying antisemitism?

The harm of normalizing anti-Israel rhetoric becomes clear when its intentions are exposed. When organizations like BDS (Boycott, Divestment, and Sanctions) and SJP (Students for Justice in Palestine) hold the notorious “Israeli Apartheid Week” on college campuses, they go past criticizing Israel’s government and move into the territory of promoting the call to destroy Israel. This often occurs through legitimizing the Intifada wars, the objective of which was not truly to impact the balance of power within Israel but to stop the state operating at all. It is the aim of these organizations to convince students with legitimate concerns about Israel’s government that criticism of Israel as a whole is how to voice those concerns. The demonization of the state is not only normalized but presented as the legitimate way to criticize Israel. With any other country, we are asked to separate the people from the government, but these organizations ask that we do the opposite. They protest against Israeli professors, boycott Israeli products, and by doing so advocate for people to take an anti-Israel stance. They do this because they know that anyone who identifies as anti-Israel will now hold a negative bias towards anyone or anything Israeli. If you are looking for the word that describes having negative feelings for someone or something solely because they are from the Jewish State, it’s anti-Semitism.

However, this isn’t the only harm done by identifying as anti-Israel. The term ‘anti-Israel’ paints the Israeli-Palestinian conflict as two sides that are diametrically opposed, implying you can only support either one side or the other. This linguistic framing of the conflict serves only to perpetuate it. The anti-Israel narrative forces you to believe that the only way to support the Palestinians is to oppose Israel. In reality, one can, and should, be both pro-Israel and pro-Palestinian. Being pro-Israel does not mean that you are against the Palestinians’ right to succeed and flourish alongside Israel. Being pro-Palestinian does not mean that you are against Israel’s right to defend her people or to exist as a Jewish state. Therefore, to not complicitly fuel the conflict, we must be careful about the connotations of the labels we use and with which we identify.

You cannot identify as anti-Israel without being anti-Semitic. Those who push for the use of anti-Israel language are aware of the connotations their words have and the harms that they cause, however many others get caught in their snare. They intentionally blur the line between legitimate criticism of Israel and anti-Israel rhetoric in order to make their expression of anti-Semitism commonplace and disguised before the uninformed eye. It is important that we are able to encourage legitimate criticism of Israel’s government as we would that of any other country. We must make it clear, however, that the use of anti-Israel language condemns not merely certain policies but demonizes an entire people. This will never lead to a productive dialogue or changes in Israeli policy. It will only lead to increased hatred and violence against the Jewish people.

About the Author
Benjamin Brent is a Policy Fellow at The Pinsker Centre, a current government student at IDC Herzliya, and a former commander in the IDF.
Related Topics
Related Posts
Comments