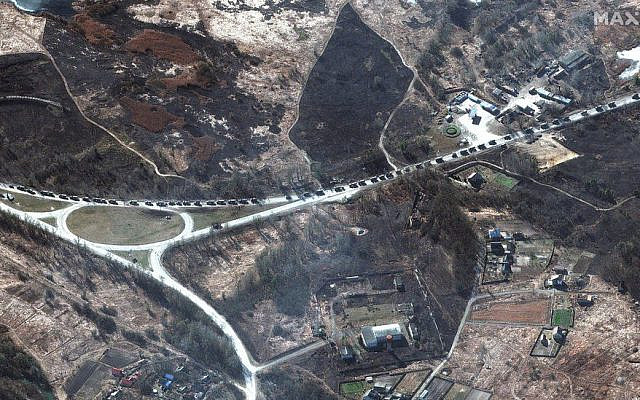 Each year, it’s the same routine. It occurs to me in the morning: “Ah, it’s Shabbat Zachor!” I hurriedly get ready for shul and dash through my Shabbos morning preparations, hoping against hope I will make it before the reading. I wave hello to my friends, sit in my usual spot, and we begin. But what are we here to accomplish? What’s the point of remembering Amalek’s evil, year after year?

Zachor et asher asah lecha Amalek, remember what Amalek did to you. We listen to the verses, the story of how the Amalekites attacked the Jews by striking the stragglers in the back, how they did not fear G-d, and how we must obliterate the memory of Amalek from the earth. In the past, this seemed like an interesting, if not super relevant, exercise. After all, war and violence, epic battles of good versus evil, seem a bit old-fashioned these days, relics of a past world that has crumbled away. But as I sit watching the news from Ukraine and scrolling through updates on my phone, that is no longer the case. If anything, I look around the world and wonder what, if anything, has really changed from ancient times.

There are several fundamental questions that arise when it comes to Amalek. First of all, who are we obliterating? Second, why is it so critical to get this reminder (and in such an intense fashion)? And finally, when does the Torah extort us to remember Amalek — and why that timing?

Amalek was initially a known entity, a nation at war with the Jewish people, whose descendant, Haman, features in the upcoming Purim story. Today, we no longer know who Amalek is, precisely. Amalek is in many ways more of an idea — an embodiment of a certain attitude, a way of existing in the world. In the desert, the Amalekites famously launched their attack by targeting the end of the line of Jewish travelers, the slow-moving, lame, and tired. Amalek strikes when the Jews are “famished and weary,” (Deut. 25:17), when the arduous travel through the wilderness has caused its wear and tear. This behavior is an important indicator of what Amalek represents: the exploitation of the weak, the cruelty of weaponizing human vulnerability into military strategy. Amalek may not exist as a continued nation, but its legacy is alive and well — just turn on the news.

The timing of the commandment to remember Amalek is also significant. “Therefore, when G-d grants you safety from all your enemies around you. . . .You shall blot out the memory of Amalek from under heaven” (Deut. 25:19). But why now? When the Jewish people finally achieve peace and safety, is this the moment to wage a long-term battle against Amalek? Perhaps the Torah is sharing something important here about the nature of war and peace, what stays unchanging over time, and our own moral responsibility.

The eternal nature of the battle against Amalek highlights a terrifying consistency in human nature, that as much as the world changes, some of the very worst things stay the same. From Haman to Hitler, antisemitism rears its ugly head over and over again, even as technology, social norms, and education levels evolve. As Rabbi Jonathan Sacks put it, antisemitism is the “paradigm case of irrational hatred.” We didn’t have to do anything or pose any rational threat to earn the hatred of Amalek; they hated us simply because of who we were. This type of irrational hatred is a particularly dark form of evil, one we saw when 19 terrorists coordinated the attacks on 9-11, murdering thousands of people they did not know, based on a deep-seated hatred. It is this same force of evil that we see repeatedly, no matter how much we think we are “past” this form of violence.

Shabbat Zachor forces us to remember that evil exists, and that battles of light against darkness are not just the stuff of fairy tales and epic fantasy novels but real life, from the earliest origins of human history until today. But again, we have to ask why? What is the purpose of this sobering (and often frightening) realization? What are we meant to do with this knowledge? The timing of the Torah’s injunction helps provide an answer. We are tasked with remembering Amalek not in times of war and distress, but in moments of peace and plenty, too. Stop, the Torah teaches us, do not lull yourself into thinking that the world is not what it is. Do not convince yourself that evil is no longer.

The Torah requires more from us — it demands that we stay aware of the true nature of the world so that we can change it. “Blot out the memory of Amalek,” we are told in Deuteronomy. We must not only remember Amalek, but actively destroy it. As Chana Kroll writes for Chabad.org, “There is such a thing as evil in this world. There is such a thing as tyranny. We must always remember our obligation, together with our capacity, to eradicate it.”

For those of you who are Harry Potter fans, the opening novel echoes this sentiment: “It was important, Dumbledore said, to fight and fight again, and keep fighting, for only then could evil be kept at bay, though never quite eradicated. . .” Parshat Zachor teaches, most of all, that what is even more dangerous than evil is thinking it doesn’t exist. We cannot whitewash evil, oppression, exploitation and injustice. We cannot pretend they are “old” problems and not part of our modern experience. We cannot take ourselves, and our own moral responsibility out of the narrative. Do not lull yourself into complacency, the Torah warns, in a world that has always required moral courage.