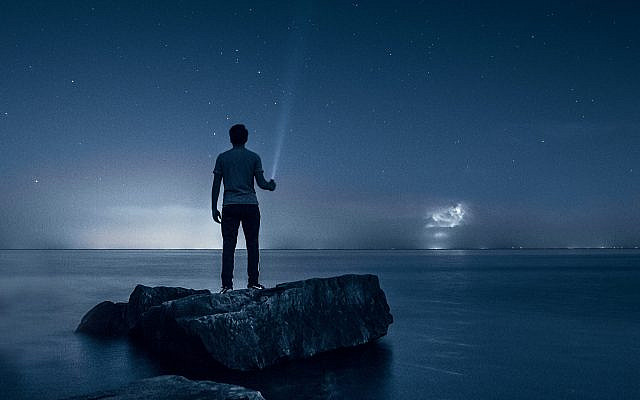 Photo by Warren Wong on Unsplash

If God wants us to know Him, to experience Him, and even to serve Him, then why does He make Himself so difficult to find?

Why does God hide Himself behind the veneer of the material world? Why did He fabricate a realm where surface would prevail over substance, and where the spiritual would be encased in the corporeal to the extent that it was virtually imperceptible? Why would God possibly create a world whose inhabitants would be so enmeshed in their physical and material pursuits that they would not only come to mistake themselves for their appetites – in other words to lose themselves in their own skin – but they would have the ability, and even the propensity, to deny the existence of their Creator?

God’s ways are mysterious, but it is our duty to try to comprehend them. Moses himself was confused by many of his experiences in Egypt and the desert, and after the events of the golden calf, He begged God to grant him understanding: “If I have indeed found favor in your eyes, let me know Your ways, so that I may know You” (Exodus 33:13). God acceded to Moses’ request. He invited Moses to come up once again onto the mountain, and there He would cause His glory to pass before him. But Moses would be granted only a vision of God’s back, not His face. “And (God) said to him, ‘You will not be able to see my face, for man shall not see Me and live’” (Exodus 33:20).

Why is it that Moses was not permitted to see God’s face? What does this mean that one can experience God’s back, but cannot perceive His face and continue to remain alive? God’s face represents His full and complete revelation, whereas His back represents a more shrouded and limited view and understanding of Him. The inability to see God’s face informs us that if we were to experience the full, unimpeded revelation of His infinite reality, which is His complete unity, then we would understand that nothing else, including ourselves, truly exists at all. The verse does not read ‘if man sees Me he will perish,’ but rather “man shall not see Me and live.” In other words, it is not that seeing God’s face would cause one to die, but rather that in the presence of His “face” one does not, and never did, truly live.

We cannot see His face because in the presence of His face, which is the manifestation of His infinite presence, there is nothing else, and therefore no “we” at all. With this, we can answer our question of why God hides Himself – because if He didn’t, we would cease to be. In order to allow for the existence of any seeming other, God had to allow Himself to be unseen.

This awareness brings tremendous relief. It informs us that it is not our fault that we are unable to see God. Our questions and doubts are not an indication that we are wicked, or sinful, or deviant. We were created to be searching and uncertain. That is the way God designed it. There is no shame in being lost, no blame to be assessed and no guilt to bear.

Guilt is not a productive emotion. It has certainly proven to be a motivating force, and it may in fact account for the majority of what most humans do on a daily basis and throughout our lives. But that does not render guilt productive, nor does it make it positive or desirable. It could, in fact, be suggested that guilt is responsible for most of the destructive thoughts and actions that we visit upon ourselves and those around us. The sense that I am not as I should be, or that I ought to be better than what I have become, often leads us to the subconscious belief that we are deserving of the suffering that we experience. This can subsequently bring us to the self-defeating and self-fulfilling assumption that we are incapable of rectifying our previous missteps. This type of shame and despair embitters us, and when we are bitter, we tend to punish not only ourselves, but everyone else as well.

God did not create us to despair. He did not conceal Himself in order to deceive us or in order to watch us fumble about in the dark. He did not send us from the garden to live lives of anguish and regression. He does not look down upon us from somewhere on high and revel in our struggle. God is not vindictive or vengeful. These are not the traits of God, but of men who have created a god in their own image with which they can intimidate and control others. Shame, fear, and guilt are the weapons of those who are hungry for power. God has no hunger and needs no power. Though His ways are indeed mysterious and our comprehension is limited, we must know that all darkness is simply a concealment of His unity which enables us to exist as individuals who will ultimately reunite and recognize our inherent divinity.

None of this is to suggest that right and wrong cannot be established and distinguished. None of this absolves us from the responsibility to choose right action over wrong action. And none of this denies the reality that we often choose poorly. We are human, our world is a realm of hiddenness, and we stumble. Yet when we do, we can admit our failings without guilt. We can feel regret without the debilitating hobbles of shame. The regret is the awareness that we did not live up to our potential. We know we can do better, but we also know that it is not we who have created ourselves imperfect. It is not we who have hidden our true essence from ourselves. Our Creator did that. This does not free us from the task of finding the truth, but it relieves us from the disgrace of being lost and imperfect.

“Olam,” Hebrew for ‘world,’ is related to the word “helam/hidden” because the act of the creation of the world was an act of concealment. Creation is thus a process of getting lost. Our mission and purpose, our raison d’etre, is the process of getting found and finding what has been concealed. This task is far less burdensome and far more achievable when we understand, to some extent at least, why God has chosen to be hidden, and when we are therefore no longer plagued with guilt, self-loathing, and self-doubt.