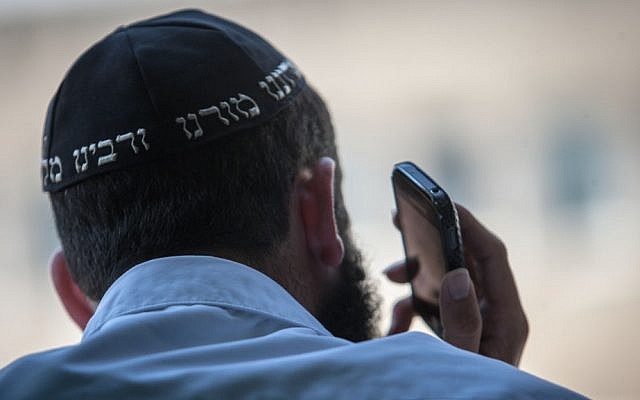 A man with a cellphone (illustrative photo: Uri Lenz/Flash90)

Not long ago, I was having an interesting discussion with a friend over evolution’s tolerance for life-threatening disease in humans. In other words, why didn’t evolution select out anyone who had a tendency towards heart failure, type II diabetes, cancer and so on. Evolution seems to have had enough time to make sure that our eyes were astonishingly sensitive to light [down to one photon] and that our ears were sensitive to sound so much so that we can practically hear the Brownian motion of molecules as they hit our eardrums. At the same time it seems that evolution was too busy to spare us from diseases that drastically cut our life expectancy short. I should already point out that all of this is assuming that there is no creator or intelligent design. In other words, once you include G-d in the equation, then you could just as readily ask why G-d made the sky blue and not pink.

In a pure Darwinian model, our existence is for the purpose of propagating our species. As long as the natural selection process generates humans that make babies that survive to make more babies, all is well. It is true that the human parents need to hang around long enough to protect the infants until they are self sufficient, but once this happens, the parents can pass on. With some simple math, you could quickly determine that humans need not live very long for all of this to work out. Of course, it is true that older humans can contribute to society, “even” ones that have passed 40 to 50 years of age. But at some “not too old” age, humans tend to use up more resources than they produce. And at that point, from an evolutionary point of view, these humans are a drain on society and are better eliminated. And no, I did not get this idea from “Logan’s Run”.

How does technical evolution differ? Put another way, once we have a TV that is 120 inches and produces a top quality image, what “need” is there to developing an even more advanced TV? Once the TV is nevertheless improved, it is still the consumer’s choice to spend money [a difficult to attain resource] on this new TV. But why would any rational person, especially with Darwinian rules encoded in their DNA, ever make such a purchase?

It is easy enough to argue that our advanced brains incorporate a whole set of rules that run contrary to Darwinian pressure. Human beings have the tremendous capability to choose a self threatening path, i.e., counter to their own best interests, secondary to emotions such as pride, greed, anger, love, loyalty and so on. Human beings will literally cut off their own nose to spite their face, if the “need” arises. So the simplest answer is that every time a human makes a technology purchase that is not an absolute requirement, it is because human beings have advanced enough to be idiots. And because of modern science, most humans do not have to worry about being pounced on by a cyber … I mean, sabertooth tiger, if they do choose to buy the 80-inch TV instead of the satisfactory 70-inch one.

So the question now is, is that all it is? Do human beings continue to do things that are NOT essential to survival and Darwinian success, simply because they can do these things without suffering significant repercussions?

Whether by cosmic fluke or divine planning, human beings have also developed the desperate need to know more. There is something in the human psyche that leads us to push on, to conquer limits in our knowledge base, even if the risk is dramatic. There is a fascinating story from the time of the first atomic bomb tests. Apparently, a reporter was told by one of the physicists of the Manhattan project that there were some who theorized that an atomic bomb explosion could ignite all the air in the atmosphere and turn the world into a fireball ! The reporter legitimately asked how the physicists could take such a chance. The answer was simply “How else would we know?”.

My perspective on this issue is simply that human beings are not just the simple product of evolutionary forces. The great leaders of history, while often being tyrannical, still were preoccupied with beauty, art, and even the advancement of knowledge, not purely for the sake of building better war machines. Definitely in the Jewish world, once the land of Israel was in the Israelites’ possession, the focus was no longer on the expansion of borders. Instead, the key task of these ancient Jews was to fulfill the commandments of the Bible. And part of those commandments had to do with learning and then passing on this learning to the next generation. This hardly constitutes a classic following of Darwinian rules. But, there is a promise to the Jewish people [that I mentioned in my last blog post], that as long as the Jews would keep the Torah, the Torah would in turn keep the Jews.

So it seems that what makes humans unique is that we break from the innate rules of nature and the cosmos. Humans go out of their way to push Darwin back.. When, God forbid, a child is ill, we don’t stand around the bedside just observing and waiting to see what will happen. We intervene, with all of the knowledge and skills that we have. In the Westernized world, we will dedicate tremendous resources to a patient, even if the cost of these resources goes well beyond the present and future productivity of the patient. If we did not live this way, we would simply be barbarians. And while our species would survive, I would argue that we would not be a species worth saving.

Whether Darwinian rules or G-d, we managed to get to this point in time, with many successes, and of course failures, under our belts. Now that we are at this point in history, we have the opportunity to see beyond just our basic survival. There is a force within us that drives us to need to know answers. I can’t think of a Darwinian advantage to a tendency that would waste resources just to satisfy curiosity. But as one who does believe in intelligent design, I see our innate curiosity and drive to mentally advance as our unique divine gifts. And once we have these gifts, it is our responsibility to respect these gifts and to use them to the benefit of our entire race.

It would be the ultimate cosmic joke if a mindless, heartless, soulless universe created beings that refuse to believe that they were created by a mindless heartless soulless universe. I choose to believe differently. And I would choose to believe in divine design, even if it really annoyed Darwin. But then again, I would always remind Darwin that his old first-generation Apple iPhone is good enough, and that there was no evolutionary need to upgrade to a phone like mine. He who laughs last …