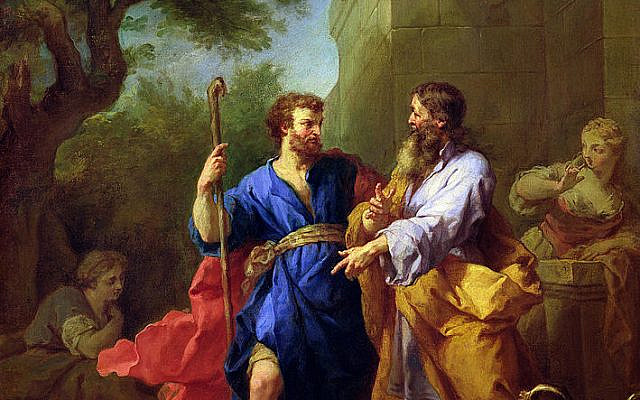 Jacob And Laban, Before 1737 Oil On Canvas

What motivated Rachel to steal the terafim as she departed the house of Lavan?

The classical rabbinical explanation for this literary tangent was Rachel’s interest to distance her father from idolatry [1], as Lavan later refers to them as his “elohai”, ‘gods’ (Breishit 31:30). Inspired by that motivation, it seems odd to only pursue this effort upon her departure and not at any other time while living in his home. Similarly, why would she keep them and not destroy them? As a product of human creativity and worship, an idol certainly holds religious and sentimental value, but is ultimately replaceable. The loss of an idol certainly doesn’t force its worshipper to resort to noncorporeal monotheism. Furthermore, the contextual connection of the theft with the flight of Yaacov’s family from the house of Lavan is conspicuous. Suggesting the theft is more likely connected with the family’s departure rather than the religious significance of the idols. There are two alternative theories that are strongly cohesive with the text as well as cultural narratives known to modern archeology.

The first explanation derives from the inclusion of Lavan’s status as a diviner (30:27). The text superficially implies its relevance from the fact that Lavan divines Yaacov’s divine favor. However, it is odd to require divine intervention to appreciate Yaacov’s prolific success as supernatural. Similar conclusions are deduced by others in the Torah without invoking divine inspiration (e.g. Avimelech and Yitzchak (26:28) and Yosef and Potifar (39:3)). Rather, the convenience of this conversation reveals to the reader Lavan’s status as a diviner to provide context for Rachel’s theft. Rachel was informed by Yaakov that they were about to surreptitiously flee from Lavan. Seeking as much of an advantage for success as possible, Rachel stole her father’s incantation tools, his terafim, to make him less capable of divining their whereabouts [2].

We learn of the cultural function of incantation tools as medium for divination from the later story of Yosef framing Binyamin (44:5). While not explicitly called terafim, diviners would use their distinct tools for their craft, likely being called by many names depending on region, form and function. This is not explicitly supported by archeological sources known to the author, but is conducive with the text and is widely supported among commentators [3].

An alternative explanation is likewise parsimonious with the text but also incorporates an intriguing nuance of ancient Mesopotamian law. The legal owner of hereditary property rights within a family was demarcated by the possession of familial idols [4]. The idols represented a discrete and irrevocable icon of control and deference to authority within the family unit and for public recognition. Presumably, should the dominant family member lose control of those idols, their claim of property and inheritance would be in jeopardy, all the more so potentially reverting authority to the new owner.

If the terafim represented this pragmatic role of family idol it would explain Lavan’s targeted complaint against Yaacov for their theft and his motivation for such a harried pursuit. Furthermore, this explains Rachel’s motivation to steal the teraifm upon her departure as she is about to lose access to her family’s property and any potential legal rights she or her sister might have to family inheritance. Rachel and Leah already made it clear that they knew they were being unjustly denied their familial inheritance by Lavan (31:14-16), therefore she would be motivated to seize the property rights any way she could before it was too late. She would not have been able to get away with such an act while in the house of Lavan as everyone knew Lavan as the rightful heir and she would have been indicted for theft. However, far from home she may have been able to use her family idols to her benefit. Further still, this explains why she hid the terafim and didn’t dispose of them. Alternatively, this may have simply been a final act of sabotage against her estranged father as she cast his authority into doubt amongst the remaining family members with the absence of his icons of ownership. Punishing his miserliness towards her and her sister by dismantling his familial primacy in the absence of the idol’s legal power.

While seemingly of spurious literary value, the rationale for Rachel’s motivation to steal the terafim is ultimately the pretext for profound literary significance that cannot be overstated. What did Rachel do with the terafim after Lavan left? Did anyone know she had them in her possession? The attentive reader is reminded of her theft during the events following the destruction of Shechem. Yaacov encouraged his family members to dispose of their foreign idols (35:2-4) with the subsequent tragic death of Rachel (35:16-20). Is the text harkening the reader back to the story of the terafim and Yaacov’s unfortunate lethal curse upon the culprit (31:32)? Later, Yosef recapitulates the scene to his brothers, implying that her theft was known to the rest of the family. This seems to imply Yaacov knew he had fatally cursed her and Yosef may have held him to blame. (refer to “Why Hide the Cup in Binyamin’s Bag?”). Ultimately the intricate and complicated events that lead the family of Israel to Egypt force the reader to meditate on these ideas.