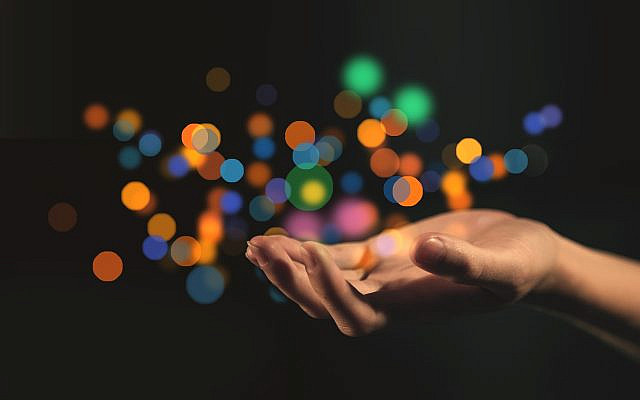 "Physically, we are almost nothing; spiritually, we are brushed by the wings of eternity." (Image from Pixabay)

The laws of sacrifices that dominate the early chapters of the Book of Leviticus are among the hardest in the Torah to relate to in the present. It has been almost two thousand years since the Temple was destroyed and the sacrificial system came to an end. But Jewish thinkers, especially the more mystical among them, strove to understand the inner significance of the sacrifices and the statement they made about the relationship between humanity and God. They were thus able to rescue their spirit even if their physical enactment was no longer possible. Among the simplest yet most profound was the comment made by Rabbi Shneur Zalman of Liadi, the first Rebbe of Lubavitch. He noticed a grammatical oddity about the second line of this parsha:

Speak to the Children of Israel and say to them: “When one of you offers a sacrifice to the Lord, the sacrifice must be taken from the cattle, sheep, or goats.(Lev. 1:2)

The essence of sacrifice, said Rabbi Shneur Zalman, is that we offer ourselves. We bring to God our faculties, our energies, our thoughts and emotions. The physical form of sacrifice – an animal offered on the altar – is only an external manifestation of an inner act. The real sacrifice is mikem, “of you.” We give God something of ourselves.[1]

What exactly is it that we give God when we offer a sacrifice? The Jewish mystics, among them Rabbi Shneur Zalman, spoke about two souls that each of us has within us – the animal soul (nefesh habeheimit) and the Godly soul. On the one hand we are physical beings. We are part of nature. We have physical needs: food, drink, shelter. We are born, we live, we die. As Ecclesiastes puts it:

Man’s fate is like that of the animals; the same fate awaits them both: as one dies, so dies the other. Both have the same breath; man has no advantage over the animal. Everything is a mere fleeting breath. (Eccl. 3:19)

Yet we are not simply animals. We have within us immortal longings. We can think, speak, and communicate. We can, by acts of speaking and listening, reach out to others. We are the one life-form known to us in the universe that can ask the question “why?” We can formulate ideas and be moved by high ideals. We are not governed by biological drives alone. Psalm 8 is a hymn of wonder on this theme:

When I consider Your heavens,

the work of Your fingers,

the moon and the stars,

which You have set in place,

what is man that You are mindful of him,

the son of man that You care for him?

Yet You made him a little lower than the angels

and crowned him with glory and honour.

You made him ruler over the works of Your hands;

Physically, we are almost nothing; spiritually, we are brushed by the wings of eternity. We have a Godly soul. The nature of sacrifice, understood psychologically, is thus clear. What we offer God is (not just an animal but) the nefesh habeheimit, the animal soul within us.

How does this work out in detail? A hint is given by the three types of animal mentioned in the verse in the second line of parshat Vayikra (see Lev. 1:2): beheimah (animal), bakar (cattle), and tzon (flock). Each represents a separate animal-like feature of the human personality.

Beheimah represents the animal instinct itself. The word refers to domesticated animals. It does not imply the savage instincts of the predator. What it means is something more tame. Animals spend their time searching for food. Their lives are bounded by the struggle to survive. To sacrifice the animal within us is to be moved by something more than mere survival.

Wittgenstein, when asked what was the task of philosophy, answered, “To show the fly the way out of the fly-bottle.”[2] The fly, trapped in the bottle, bangs its head against the glass, trying to find a way out. The one thing it fails to do is to look up. The Godly soul within us is the force that makes us look up, beyond the physical world, beyond mere survival, in search of meaning, purpose, goal.

The Hebrew word bakar, cattle, reminds us of the word boker, dawn, literally to “break through,” as the first rays of sunlight break through the darkness of night. Cattle, stampeding, break through barriers. Unless constrained by fences, cattle are no respecters of boundaries. To sacrifice the bakar is to learn to recognise and respect boundaries – between holy and profane, pure and impure, permitted and forbidden. Barriers of the mind can sometimes be stronger than walls.

Finally, the word tzon, flocks, represents the herd instinct – the powerful drive to move in a given direction because others are doing likewise.[3] The great figures of Judaism – Abraham, Moses, the Prophets – were distinguished precisely by their ability to stand apart from the herd; to be different, to challenge the idols of the age, to refuse to capitulate to the intellectual fashions of the moment. That, ultimately, is the meaning of holiness in Judaism. Kadosh, the holy, is something set apart, different, separate, distinctive. Jews were the only minority in history consistently to refuse to assimilate to the dominant culture or convert to the dominant faith.

The noun korban, “sacrifice,” and the verb lehakriv, “to offer something as a sacrifice,” actually mean “that which is brought close” and “the act of bringing close.” The key element is not so much giving something up (the usual meaning of sacrifice), but rather bringing something close to God. Lehakriv is to bring the animal element within us to be transformed through the Divine fire that once burned on the altar, and still burns at the heart of prayer if we truly seek closeness to God.

By one of the ironies of history, this ancient idea has become suddenly contemporary. Darwinism, the decoding of the human genome, and scientific materialism (the idea that the material is all there is) have led to the widespread conclusion that we are all animals, nothing more, nothing less. We share 98 per cent of our genes with the primates. We are, as Desmond Morris used to put it, “the naked ape.”[4] On this view, Homo sapiens exists by mere accident. We are the result of a random series of genetic mutations and just happened to be more adapted to survival than other species. The nefesh habeheimit, the animal soul, is all there is.

The refutation of this idea – and it is surely among the most reductive ever to be held by intelligent minds – lies in the very act of sacrifice itself as the mystics understood it. We can redirect our animal instincts. We can rise above mere survival. We are capable of honouring boundaries. We can step outside our environment. As Harvard neuroscientist Steven Pinker put it: “Nature does not dictate what we should accept or how we should live,” adding, “and if my genes don’t like it they can go jump in the lake.”[5] Or, as Katharine Hepburn majestically said to Humphrey Bogart in The African Queen, “Nature, Mr Allnut, is what we were put on earth to rise above.”

We can transcend the beheimah, the bakar, and the tzon. No animal is capable of self-transformation, but we are. Poetry, music, love, wonder – the things that have no survival value but which speak to our deepest sense of being – all tell us that we are not mere animals, assemblages of selfish genes. By bringing that which is animal within us close to God, we allow the material to be suffused with the spiritual and we become something else: no longer slaves of nature but servants of the living God.

The Power of Ideas: Words of Faith and Wisdom

With a Foreword by HRH The Prince of Wales, this new volume brings together a compelling selection of Rabbi Sacks’ BBC Radio Thought for the Day broadcasts, Credo columns from The Times, and a range of articles published in the world’s most respected newspapers, along with his House of Lords speeches and keynote lectures.

First heard and read in many different contexts, these pieces demonstrate with striking coherence the developing power of Rabbi Sacks’ ideas, on faith and philosophy alike. In each instance he brings to bear deep insights into the immediate situation at the time – and yet it as if we hear him speaking to us afresh, giving us new strength to face the challenges and complexities of today’s world.

These words of faith and wisdom shine as a beacon of enduring light in an increasingly conflicted cultural climate, and prove the timeless nature and continued relevance of Jonathan Sacks’ thought and teachings.

Studies in Spirituality: A weekly reading of the Jewish Bible

Studies in Spirituality is the new volume collating a year of Rabbi Sacks’ Covenant & Conversation essays. Each chapter on the weekly Torah portion contains an uplifting idea on finding spirituality within every sedra, and within ourselves.

With a Foreword by Sivan Rahav Meir.

A decade in development, the new Koren “Tanakh: Magerman Edition” offers an eloquent, faithful, and masterful translation of the Torah, Prophets, and Writings with the renowned Koren Hebrew text. This volume includes – for the first time – Rabbi Sacks’ new, modern, readable and accurate translation of Torah that was completed shortly before he passed away.

In a recent review, The Jerusalem Report said: “The beauty, felicity and scholarship inherent in Sacks’ rendering of the Torah into elegant modern English are apparent on every one of its 498 pages, which form something like a quarter of the whole… [This] magnificent new edition of the Tanach – a work that sets a new standard of excellence.”

To purchase the Tanach directly from Koren publishers: click here.

Rabbi Sacks And The Community We Built Together

Family members and colleagues of Rabbi Lord Jonathan Sacks from the UK as well as team members from his tenure as Chief Rabbi have joined to produce a new book of many original articles, photos, stories and Torah teaching to pay their tribute to Rabbi Sacks’ impact as Chief Rabbi and perpetuate that legacy – the community we built together.

Some of the many highlights include, a Foreword from Lady Elaine Sacks, an Introduction from Chief Rabbi Ephraim Mirvis, recollections from Rabbi Sacks’ family, stories from friends and colleagues, insights into all of his books, and contributions from the Dayanim of the London Beth Din.

Click here to learn more and to order a copy.