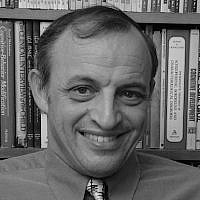 The Blogs
Daniel Gottlieb
Apply for a Blog
Advertisement
Please note that the posts on The Blogs are contributed by third parties. The opinions, facts and any media content in them are presented solely by the authors, and neither The Times of Israel nor its partners assume any responsibility for them. Please contact us in case of abuse. In case of abuse,
Report this post.

The bombardment of homes, schools and neighborhoods does not photograph well in the world media. The immediate and natural identification that we as human beings have with personal suffering of children causes us to be repulsed by these images. But our offended sensibilities often impair our ability to fully understand what really stands behind these events. We tend to assume a position of absolute moralism in which events of this sort are automatically condemned and the intentions of those who commit the acts of bombing are deemed callous at best and sinister at worst.

The death of citizens in war-time is not new. According to the United States “Department of Defense Dictionary of Military and Associated Terms” the euphemistic term “collateral damage” denotes “unintentional or incidental injury or damage to persons or objects that would not be lawful military targets in the circumstances ruling at the time.”  In other words, sometimes civilians are killed in order to achieve a justified military objective that will ultimately save many more lives and that cannot be achieved without inflicting circumscribed suffering on civilians.

The killing of innocent civilians in Gaza is not My Lai or Nanking. It is not intentional. It is not motivated by hate or anger or designed to satisfy a sense of revenge. The primary target of the attacks is not the civilian population but rather the buildings in which  they live and learn which have been converted by hostile elements into bastions and battle  posts. Israel laments the loss of innocent lives; it does not revel in  the death of its enemies children.

The bombardment of Gaza is not the Blitz on London. it is not designed simply to instill fear in the hearts of innocent civilians. Even in the midst of the conflict, Israel has acted in a more humanitarian manner than the Palestinians. Israel has declared unilateral humanitarian ceasefires that were violated time and again by the Palestinians. It is Israel that allows hundreds of truckloads of supplies to flow to Gaza even at the height  of hostilities.

The targeting of Gazan civilians is not even Hiroshima or Nagasaki.  The purpose is not strategic nor is it designed simply as a show of strength and a warning of worse things to come. The Israeli attacks are not all-encompassing and indiscriminate. The strikes are surgical. but as in surgery, sometimes unrelated but adjacent organs are inadvertently damaged in the process of saving the patient’s life. But it is not the people that Israel is targeting. Buildings can be rebuilt but unfortunately Palestinians who are killed because they ignore Israeli warning to evacuate their neighborhoods or who are prevented from doing so by their leadership cannot come back some other day.

The operation in Gaza is not even similar to the recent decision of the United States to renew the bombing in Iraq as reported in the New York Times on August 8, 2014: ” President Obama on Thursday announced he had authorized limited airstrikes against Islamic militants in Iraq.” Iraq presents no threat to farmers in Nebraska 8,000 miles away; but the Islamic ,militants in Gaza present an existential threat to the farmers in southern Israel, some of whom are only eight kilometers away.

The war Israel is waging is not a war against people. It is a war against rockets and tunnels. It is their destruction that is the sole objective of this war. Hospitals, schools, mosques and houses are not the targets of this operation but rather the missiles and launchers nestled in them. It is the intricate network of tunnels burrowed under houses mosques and neighborhoods that are the focus of the Israeli action, not the people who tacitly allowed money and supplies designated to improve their lives to be funneled and tunneled for the purpose of taking the lives of others.  It is the Hamas that coerced the Palestinian civilians to acquiesce into turning their homes into bunkers and their alleyways into improvised launching pads .

It is the United Nations – if we agree to judge them benevolently – that was not astute enough to realize that its school yards were being used for ammunition rather than exercise.  A recent headline on the UNRWA website declares: “UNRWA CONDEMNS PLACEMENT OF ROCKETS, FOR A SECOND TIME, IN ONE OF ITS SCHOOLS.”  The article goes on the state, “UNRWA strongly and unequivocally condemns the group or groups responsible for this flagrant violation of the inviolability of its premises under international law.” While UNRWA does not state who is responsible for the act, it is safe to assume that it is not Israel. Might the positioning of rockets in schoolyards serve as the true impetus for Israeli attacks against these installations rather than some simple desire to kill Palestinians?

People, particularly innocent ones, are not he target of this operation – not even the quarter of a million children a Hamas spokesman declared would be armed with hand grenades. The bombings are unfortunate and unintended consequences of a sovereign state trying to assert its natural right to defend itself against unrelenting acts of terror perpetrated against it for protracted periods of time by Islamic extremists who do not feel themselves bound to any accepted standard of honesty and decency..

Collateral damage is always unfortunate but sometimes it is also unavoidable. Sadly, at times it is inevitable.

About the Author
Dr. Daniel Gottlieb is a Clinical Psychologist and Family Therapist and the Clinical Director of the Shinui Institute in Herzeliya Israel
Comments