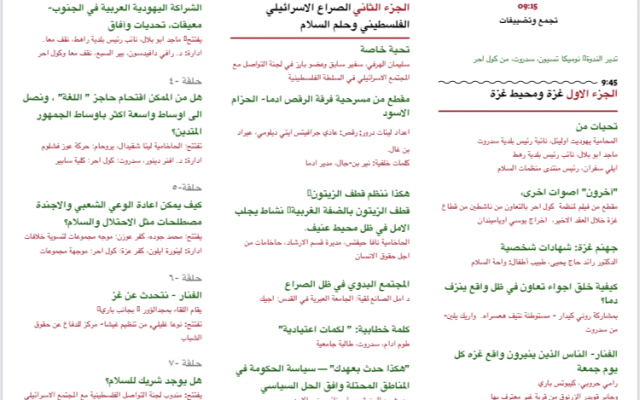 A mother and baby starving, in a house of filthy, dilapidated walls, their only toilet a stinking bucket in one corner, no electricity, no running water and empty cupboards.

A man knocks on the door. He has brought bread and soup, fruit and vegetables. Enough for a week.

“Who are you?” The mother asks.

“I am Yanni from the Likud party. I have come to help you.”

The mother looks horrified. “Oh no”, she says. “We will not accept your help.”

The scenario happens three times. A woman from Labour, a young man from Cachol Lavan, and finally, an older man from Yesh Atid.

In each scenario, the mother refuses the help and turns the person and their food away.

In a few days, both the mother and the baby slowly starve to death.

When someone has no food to eat, no food to offer their child, are they in any position to choose from which political party their salvation will come?

The mother will accept any help to save her life and the life of her beloved baby. And she will be grateful. And she might help others too.

World Aid is not affiliated to a political party. When we give to a food bank, it is not a political gesture. Nor is it when we give charity to try to stop poverty around the world.

So why does peace have to be political? Are there truly any sane political parties (and the word sane is important here) who DON’T believe in peace? Who WANT mothers and sons, fathers and daughters, to be blown up by the ‘enemy’s’ rockets?

Is there really one truly sane and rational human being in the world, who, when asked if they prefer peace or war, would answer ‘war’?

Peace is NOT a political word, a political state of mind or a political world solution. It is a fundamental human right, and the status quo to which every sane person in the world aspires, each and every day.

Last Friday, 4th March, a peace event was to be held in Sderot. Many people, including my husband, Baruch Velleman, worked tirelessly to organise an engaging and fascinating programme, the activities, the food, the travel and the logistics, where it was hoped many people would gather. But in the last week, a serious problem arose. The right wingers in Sderot declared they didn’t want a peace event in their town; they bombarded the deputy mayor due to give the opening welcome, with hundreds of text messages, hour after hour, threatening violence if Sderot was indeed chosen.

Apparently, the right wingers in Sderot don’t want peace. Apparently, they would prefer to live in a country which remains at war until the end of time.

What they fear is a “left wing” peace. But the event was simply about peace. Peace, and equality between human beings, the ultimate of human rights.

The organisers of the event did indeed move it, not because they felt discouraged, but because they didn’t feel it was fair to endanger all the lives of those living in Sderot, and because the local authority refused to allow the event to take place under their aegis.

Thankfully, the event went ahead in the neighbouring village of Ibim without any problems at all. Over three hundred people came to take part, welcomed by peace stalls outside, a hearty breakfast inside, and with speeches, poems, songs and dance by a myriad of speakers and performers. Jewish, Christian, and Muslim.

Representatives of The Palestinian Authority stated loudly and clearly: “We are partners for peace”. And a former member of the Knesset delivered another of the most important messages of the day, “Without peace, there can only be war.”

There we were, an audience with so many different backgrounds, religions, races, cultures and political beliefs, all brought together by one word: PEACE.

Because if there can’t be peace, there can only be war.

I think this is something many privileged people in this country, living happily with their friends and neighbours, do not understand. They do not wake up every day thinking of the poor and hungry in Gaza, or those denied the right to visit their families in the West Bank. For them, the land is flowing with milk and honey. They have peace.

Wrong. What about the scenario with which we began? The mother and her baby? That’s happening in Gaza every day. What kind of peace is it for them?

It seems some people really do believe war is okay, if it is in some place far away from their own doorstep. If it’s not their children fighting and dying.

Only, as history tells us, and as we can see by the tragedies unfolding in the Ukraine, if we do not stop war somewhere else, it could so easily happen where we are.

And this country will be at war until every single one of its citizens is equal.

Israel needs to make peace with the Palestinians to create a neighbouring country, to live side by side, in peace. It really is not political. It is just basic common sense.

On Friday, my husband and I were driving home after the peace event, so relieved no trouble had occurred, and so inspired by all the artists there, the filmmakers working with young people, the Arab and Israeli dancing troupe, the people who tirelessly make contact with people in the West Bank and with Gaza to show their support and give them hope, the leaders working behind the scenes every day to get us all closer to peace, the writers and the journalists and the researchers who give up all their time working for peace – and who will not stop until we get it. We had so much energy on our drive home.

Why can’t three hundred people become three thousand, we asked. Why not thirty thousand? Three hundred thousand? Three million? Why can’t almost every adult in this country and in Palestine fight for peace – because beneath all the political nonsense, that’s all we really want. Even those who think they want war because it’s the only way to have “their country”. Even they would not sacrifice their children and their children’s children. Not if they could have a real and lasting peace, with bearable compromises for both sides. Peace.  For all of us.

And then my husband said something fascinating. What would happen if we now began serious peace negotiations with the Palestinian Authority? As they moved forward would Hamas revise its charter? Would the Gazan majority be able to defeat Hamas and its terrorism? Would they also be able to fight for peace with their neighbours?

Isn’t it about time we gave peace another chance?

So, I invite you to ask yourself: do you want to live in a peaceful and equal society where every single individual has basic human rights? Where our children do not live in fear of violence and death? Where we are not always waiting for the next explosion of hatred and violence?

The answer is surely yes.

And that is why peace must NOT be political.