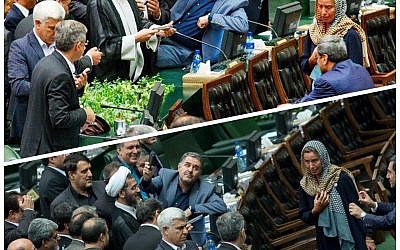 With the efforts of the Iranian protesters throughout Iran who have come to the streets demanding the overthrow of the Islamic regime, the study of the fate of the Islamic Republic has been placed on the agenda of all the democratic powers of the world in the past few days. With surprise and admiration, media and political leaders of the world have been watching the power of the protesters in Iran who succeeded in dictating to the White House to defend the liberation struggles of the Iranian people, and take their stance in defending the efforts to overthrow the occupying regime in Iran.

In the meantime, the opportunist European Union shamelessly announces that by staying with the Iran Deal, they will do their best to prevent the collapse of the Islamic regime in Iran.  We must ask, why would the EU defend a regime that funds and supports terrorism?

From its inception, with lies and manipulations, this dishonest union has deceived the Europeans with a series of lies and deceits to convince ordinary people of different European countries that the danger of a Third World War was imminent; and with the risk of Russia attacking the Balkan and the neighboring Scandinavian countries, their only solution to global peace and security would be forming a liberal and peaceful European Union.

But before the outbreak of the revolution against the clerical regime in Iran with the support of the current administration in the White House, the depth of the dishonesty and disgrace of the EU was not the clear to Iranian nation and others. Leaders of this Union claim that the reason behind their support for the executions and massacres of the regime in Iran, Syria, Yemen and Iraq is the Union’s commitment to a Deal which was approved and agreed by the United Nations. The EU also talks about the cost of cancellation of this Deal — a contract that was essentially a handful of treaties that were never openly or with transparency explained to the people of Iran and was contrary to the spirit of the sane international accords.

Do you think the main concern of cancelling of the Deal is the economic losses for the European Union? The answer is no, but somewhat could be true too. This Union is well aware that the major constituent countries of the Union, especially Britain and France, have colonized the Middle East since the First World War; and despite international commitments after World War II, they were not ready to accept the liberation of most Arabic countries colonized by Britain and France.

But in Iran, before Khomeini’s Revolution, Europeans, and especially the above-mentioned countries, hadn’t benefited much. Therefore, after the establishment of the clerics in Iran, those European powers rushed to Khomeini’s table and, with the ruling traitors’ special generosity, they were able to steal the wealth of the Iranian nation. Any attempt to dismantle such a system would mean future economic competition of the three most powerful countries of the European Union, unless the future system in Iran acts in line with the “whole” interest of the EU. This means reviving the current existing relationship with the European powers.

This, of course, is one of the aspirations of this Union. Therefore, to play their propaganda against President Trump, they continue their support for the Iran Deal. As such, with the rise of the protests in Iran against and the nation’s efforts for overthrowing the regime, we would not be surprised that the European Union organizes mass demonstrations in Western countries against the new American sanctions against the regime in Iran.

Hasn’t the EU advocated for Palestinian terrorists in their “free and democratic” parliaments in the past? Haven’t these EU countries supported Saddam Hussein and opposed the war with his forces by surrendering to the communists and planning protests? Haven’t these countries played their propaganda protests in collaboration with communists when they defended the flotilla which was trying to breach the long-standing blockade of the Palestinian Gaza Strip and was carrying banned items for the terrorist arm of the Islamic Republic, Hamas?

There is no doubt the EU would do the same today as it is their practice and pattern of behavior. Sadly, the EU is fully committed to defend the Islamic republic and its sponsoring of terrorism. If the Iranians abroad who are opposed to the Islamist regime do not step forward to organize international protests against the regime, the consequences will be unimaginable.

Finally, we should add that all European countries, their politicians and EU nations do not agree with the current approach of the European Union to the Islamic Republic. Among the 27 EU countries, only three, namely Germany, France, and Britain make the decisions in line with their own interests. Those EU countries should know that they cannot afford to obliterate their long term relationship with Iran because of their short term interest. EU’s long-term interest calls for adopting a democratic approach toward the people of Iran and supporting their efforts to overthrow the theocratic regime, so the EU countries would be able to secure their place after the collapse of the Islamist regime and establishment of democracy in the future Iran.