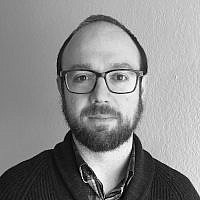 The Blogs
Robert Beiser
Apply for a Blog
Advertisement
Please note that the posts on The Blogs are contributed by third parties. The opinions, facts and any media content in them are presented solely by the authors, and neither The Times of Israel nor its partners assume any responsibility for them. Please contact us in case of abuse. In case of abuse,
Report this post.

We live in the time of #MeToo. We live in a time of #BlackLivesMatter and #MarchForOurLives. As Passover arrives each year, with all the noise and strife in the world and online, how is anyone supposed to remember those who are kept voiceless, those in modern slavery – victims of human trafficking?

In an ELI Talk I gave in 2016, I highlighted various reasons why I think the global Jewish community is perfectly positioned in history, culture, and experience to take on the monstrous issue of modern slavery. On Passover, we are instructed to believe ourselves to be in slavery once again, to close our eyes and imagine the whips at our backs, the fear, and the hopelessness. Some Jewish traditions re-enact the violence by chasing each other with leeks, some of us acting as slaves and some as slave masters. During our Passover seder, we repeat over and over that we were slaves in the land of Egypt. Just like many human trafficking victims today, we left our homeland due to famine and were exploited. Just like contemporary refugees, we did not have the protection of citizenship or belonging, and we were left vulnerable to violence. No other group in the world invests so much, so consistently, in trying to connect with the sorrow of being enslaved and abused. So when it comes to the question of who will commit to ending modern slavery, to paraphrase Rabbi Hillel, “If not Jews, who else will?”

I work on the issue of local human trafficking every day in my job at Seattle Against Slavery. While I occasionally face the challenge of those who try to justify the exploitation of others, the biggest obstacle I run into on a daily basis is apathy. There are so many problems facing the world, and paying attention to the issue of modern slavery can be so painful and seem like such a daunting task to fix. It is easier for most of us to put it out of our minds or address smaller injustice right before us. But we Jews already keep slavery in our minds every year! And we are certainly not afraid of putting a little work in, as evidenced by our Kosher for Passover food searches, our elaborate meal preparations, and even our removal of chametz before we plunge ourselves once more into the mindset of the slave camps.

So one might think that the Jewish community is leading the charge against anti-trafficking work, right? Sadly not. There are certainly pockets of Jewish abolitionists here and there – the Tomato Rabbis of T’ruah, the compassionate volunteers of NCJW, the tireless advocates of ATZUM in Israel – but overall, anti-trafficking work is starkly gentile. And I think it’s because Jews struggle with their own communal challenges, and for all our “re-creation” drama over Passover, we believe we have left the struggle of slavery behind.

Educator Jackson Katz has often said “domestic and sexual violence are seen as ‘women’s problems.’ But they’re not; they’re men’s problems that become a problem for women and children.” In spite of the Jewish investment in the stories of freedom and liberation, I think we see human trafficking and modern slavery as someone else’s problems. And yet, are Jewish men buying sex from trafficking victims in cities across the country? Of course. But what if a trend emerged of rabbinic divrei torah against sex buying from strangers, leading the way for other faith groups to face the exploitation in their own communities? Are Jews eating “bread brought forth from the earth” by the hands of labor trafficking victims, exploited immigrant workers who three generations ago could have had names like Esther and Josef instead of Maria, Jose, or Ibrahim? Of course. We shop at the same grocery stores as everyone else. But what if large Jewish institutions came out in support of the Fair Food Program or other farmworkers’ rights initiatives and encouraged synagogues to buy ethical goods, not just Kosher ones?

There are so many challenges facing our world, and the Jewish community puts the time, energy, and resources into fighting so many of them. As we enter Passover again this year, consider how natural it is, how necessary it is, for Jews to engage in the fight to end modern slavery. If not us, who?