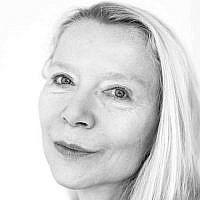 The Blogs
Gunda Trepp
Apply for a Blog
Advertisement
Please note that the posts on The Blogs are contributed by third parties. The opinions, facts and any media content in them are presented solely by the authors, and neither The Times of Israel nor its partners assume any responsibility for them. Please contact us in case of abuse. In case of abuse,
Report this post.

German Jews don’t feel safe. According to a study by the European Union Agency for Fundamental Rights, 60 percent of them are worried that they or people close to them will be victims of a hate crime in 2019. And they have every reason to feel that way. After all, 29% have witnessed attacks on other Jews during the last year. Eighty-five percent perceive anti-Semitism as a problem. It is so prevalent that most victims no longer report when they are being cursed or spit at. Since 2015, the 10,000 members of the congregation in Berlin have been receiving the monthly magazine Jewish Berlin hidden in an envelope, a step taken in cooperation with the police to ensure the safety of the congregants. In another study, 45% of young European Jews said that, for security reasons, they would not wear a Magen David or a kippah in public. It is conventional wisdom among German Jews that men can’t wear a kippah in certain areas of larger cities.

Finally, German non-Jews are taking notice as well. There is almost no day without reports, concerns, appeals, and discussions of anti-Semitism as if it were a new phenomenon.

It is not. Fourteen years ago, in January 2005, Rabbi Leo Trepp found himself compelled to deliver a passionate speech in the Parliament in the state of Rhineland-Palatinate, condemning the rise of anti-Semitism. At that time Jews were being attacked on a regular base. Orthodox men with a kippah were battered at places as public as Berlin’s Kurfürstendamm. Others, among them young girls, were harassed when their assailants noticed that they were wearing a Star of David. “And so it goes on,” the daily Tagesspiegel stated in spring 2005, describing the anti-Semitic aggression, “month after month. In Berlin. In Germany. In Europe.”

Leo Trepp, in his speech to honor the 50th anniversary of the liberation of Auschwitz, looked at these events, saying “It’s an utter shame for people to look the other way when Jews are being beaten up. Can it truly be that anti-Semitism is socially acceptable again?”

To him, it wasn’t a rhetorical question; it felt like a personal defeat. He had grown up in Germany in a neo-Orthodox family and was a young rabbi in the State of Oldenburg overseeing 15 congregations when, during the pogroms, Kristallnacht, the synagogues were burned down. Trepp himself was imprisoned in Sachsenhausen concentration camp. He escaped to the United States. Except for his brother and a cousin, the Nazis killed his entire family. Nonetheless, as early as 1954 he went back to visit. And soon he found himself working for a new beginning that he felt Germany so badly needed.

In his youth, he had watched the outright ignorance within the larger German society towards everything Jewish and the consequential indifference displayed by most citizens when the first signs of aggressive and violent anti-Semitism appeared in the 1920s. Devoid of any knowledge, these people regarded what the Nazis wrote and said about the Jews as something familiar to their own thinking. The perception they had about the Jewish community was solely built on century-old prejudice and hostility.

Trepp was convinced that to counter old and new anti-Semitism, it was not enough to teach Germany’s post-war generation about the Holocaust. They needed to learn about Jews and living Judaism. They needed to read and hear about the first ethical monotheism that had influenced philosophical and religious thinking for thousands of years. They needed to understand that Jewish law aims towards life and that the rabbis have always been interpreting Torah accordingly. Referring to the Talmud, Trepp told young Germans that the children of perpetrators did not bear guilt for what their fathers did, but they had to take responsibility. He started to accept teaching assignments at different German universities in the early 70s, pushed for Jewish Studies, and at the same time began writing books on Judaism in German.

He lived long enough to watch taboos breaking away and to witness statements and actions against Jews, including himself, unthinkable 20 years before. In the last year of his life, already 97 and still eager to teach and reach out to non-Jewish Germans, he asked, “Did we all fail? Did we completely fail?” thinking of himself and dozens of other survivors who had talked to school classes and at countless events to let the next generation know what ignorance and indifference can lead to.

But a handful of survivors cannot change the mind of millions. And Germany itself never undertook serious steps to assure that future generations would learn about Jewish life and ethics in a meaningful way. The results are mind-boggling. A new study, published by the European Union found that two-thirds of Germans think that they know too little about Jewish culture and life. And although the Central Council of Jews, as well as some other Jewish entities, are trying their best to educate by organizing talks or workshops at schools, it’s just a drop in the bucket.

At the same time, knowledge is more important than ever. When, together with a team from the Jewish Museum in Berlin, I presented a workshop about Jewish life at a German school last summer, some students asked to talk with me afterward. “Sure,” I said.

They asked me, “What do you think about what you people do to the Palestinians?” I was stunned. Were these the same 16-year-olds who had no idea that Jesus was a Jew, who didn’t know that it was actually the Jews who came up with the Ten Commandments, and who had no idea that women could be rabbis or even that they could run around in jeans as I did? But they did have an opinion on the Israeli-Palestinian conflict. This opinion, though, was colored by all the stereotypes they had about Jews. And, according to assertions of school insiders, teachers are no better informed than their students.

Up to his passing in 2010, Leo Trepp taught Judaism at the University of Mainz, the city he was born in. He would tell his students, most of them Christians and, in his last years, a growing number of Muslims, “You will be the future pastors and teachers, and you will influence young people. You have to be at the forefront to fight any sign of anti-Semitism and racism. When it comes to Jews and Jewish religion, you have to set the record straight.”

The role that teachers play in the education of children cannot be overestimated. The teaching of the Holocaust is mandatory. Why isn’t the learning of Jewish ethics and culture required? Would it make sense to integrate this topic into the curriculum of future teachers? Could teachers more effectively combat anti-Semitism if they taught not only how the Jews were killed, but how Jews live, what they stand for and what they believe in? The answer should be obvious. The better one understands a topic, the better he or she is able to convey the knowledge to others.

Education can change human beings. I will never forget the moment when, after a couple of semesters, one Muslim student told Leo Trepp that he would go back to Egypt. He thanked his professor, gave him an affectionate smile and a big hug. Was he going to love all Jews from then on? Probably not. Would he view the Israeli-Palestinian conflict with Jewish eyes? I don’t think so. But he would always know that Judaism is a religion that commands freedom and love of the stranger, that Torah inspires to help people grow, and that his own culture has adapted treasured values from the Hebrew Bible. And he would know that one can criticize the politics of another country without hating its citizens and the Jewish people.

It was a start.

About the Author
Gunda Trepp is a trained lawyer and journalist and lives as an author in San Francisco and, part-time, Berlin. Her latest book is the biography of her late husband, the scholar Leo Trepp, who was the last rabbi under the Nazis in the State of Oldenburg.
Related Topics
Related Posts
Comments