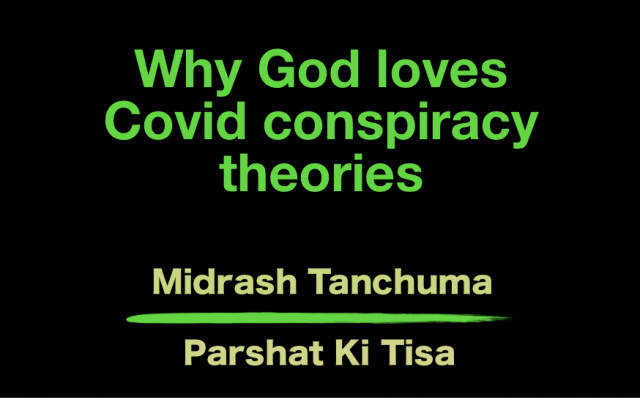 The Midrash shares a most unusual exchange between Moses and God. After God informs Moses that the Israelites are worshiping the Golden Calf, Moses responds with what seems to be a most outlandish and irreverent argument. Moses asks God if He is jealous of an inanimate object.

“Master of the Universe, are You indeed jealous of an ox? Is he Your helper? Do You bring the winds while he causes the rain to fall? Do You make the sun shine, and he the moon to glow? Do You cause the trees to grow, and he the blossoms to sprout? After all, the ox is powerless; it merely eats grass and then is slaughtered.”

Moses was obviously not asking a serious question of God. What then could the Midrash possibly mean?

‘God, you probably didn’t consider the public relations angle in all this.’

The implausible language in the Midrash is not so different than the improbable language recorded in the Torah itself. What does Moses say in defense of Jews after the sin of the Golden Calf?  Moses, in essence, reminds God that wiping out the Jews will make God look really bad in the eyes of the Egyptians and other nations. After all those miracles this is how the relationship ends? Not a flattering comment on God’s compassion. Others will question whether God is indeed an all powerful being.

Why does both the Torah and the Midrash make it seem like God possesses the human limitations of jealousy and God’s actions can be swayed by what people might think? It clearly obscures God’s divine nature and makes the rejection of God so easy to rationalize. Especially to those who are sensitive to the qualities of compassion, justice, and truth.

It has been my experience that God’s tendency to hide His tracks is a major theme of Midrash Tanchuma. Making God’s divinity clear to all interferes with Man’s free choice. Perhaps the implausible arguments that Moses makes on behalf of the Jewish People served God’s need to obscure his divinity. Let the reader jump to conclusions about God’s jealousy and His concern about bad publicity. Those seeking out God will dig deeper and find the truth. For the rest, God would rather remain in the shadows and allow people to peddle misconceptions galore.

In our times nothing has changed. Some look at Israel leading the world in vaccinating it’s people to be a miracle. After all it was not that long ago that so much of the world considered the Jewish People to be a virus in need of eradication. God, however, is content to have people claim otherwise. They look at the very same events and declare that Israel is the  ‘guinea pig’ of the world. We only have the vaccine because we  overpaid. Or, we got special treatment because the CEO of Pfizer had parents who narrowly survived the Holocaust.

According to Midrash Tanchuma, this kind of talk makes God smile because His control of Jewish destiny has once again gone undetected