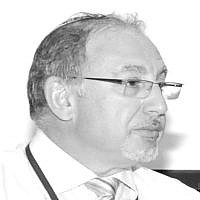 The Blogs
Maurice Ross
Apply for a Blog
Advertisement
Please note that the posts on The Blogs are contributed by third parties. The opinions, facts and any media content in them are presented solely by the authors, and neither The Times of Israel nor its partners assume any responsibility for them. Please contact us in case of abuse. In case of abuse,
Report this post.

A little while back, a friend asked me why I supported the new alliance party between Yesh Atid and Benny Gantz, an alliance which was to become the Blue and White Party.

In my friend’s opinion, Lapid was fluffy and Gantz was weak.

I respect my friend’s views, even if I do not always agree with them, but until now there did not seem to be an urgency about it. It has taken me a little time to coordinate my thoughts and have the impetus to respond.

What has helped me coordinate my thoughts is that:

Israel is poised for a possible further “war” in Gaza.

I always seem able to coordinate my views in such circumstances.

Something else happened – Benny Gantz addressed the AIPAC Conference in Washington.

I learned something new from that address. Benny, (and I am sure I may call him that), is the son of a Shoah (Holocaust) survivor. With a voice choking with emotion, he told his audience how he held in his wallet a greying picture of his mother on the day she was liberated from Birkenau Concentration Camp, together with a brightly colored picture of his son at his Army Graduation Day.

Yair Lapid is also the child of a Shoah survivor.

In terms of the Shoah, the children of survivors, are not just children. They are second generation survivors and they carry with them, through their lives, and some even say the lives of their children, the very willpower of their survivor parent or parents.

If you ask a Shoah survivor how they survived, more often than not, they will say “it was pure luck”. Luck is not the full story. But they say that because in every survivor’s psyche there is a basis of humility. How they survived is not necessarily for them the primary point. For them, the primary point is how from the edge of darkness, they returned to the road to light; to renewed life; to recreation; and in many cases, brought into this world, children like Benny Gantz and Yair Lapid.

Such children are in no way fluffy and/or weak.

They carry with them the will to survive.

Both Benny Gantz and Yair Lapid have already shown such character. They formed an alliance and put aside personal aspirations. They have shown the humility of their survivor parent(s) – the will to walk along the road of light. They established a new party, merging philosophies, ideologies and, more important, ideals for the sake of unity. Their list consists of people who are fully representative of Israeli society. They have created a platform, which, as an Israeli, I can support 100%. I do not disagree with anything. Indeed, they have brought together all my thoughts and desires, as if they knew them.

Anyone who wishes to read the main points of the platform may leave a comment and their email address and I will send it to them.

Israel stands at a crucial point in its history. Apart from our security issues, we have issues of: social deprivation; communal disunity; identity; education and many others. We need a new leadership which will deal with all those issues at one and the same time and not cherry pick. We need a leadership that puts the people first and not their personal desires, forming unholy alliances to fulfil their individual egos.

In the lifetime of every society there comes a time when it must make a decision. Does it stand still and become nothing more than a mere image in history books that children read about in times to come. Or does it look inward, see itself on the possible edge of darkness and return to the road to light; to renewed life; to recreation; and bring into the world a new generation – a generation that is secure, socially rich, communally united, strongly identified, educationally enriched and capable to deal with arising issues from the foundations of ethical values and judgments.

Blue and White, under the leadership of Benny Gantz and Yair Lapid may just be the ones to lead us to the right road.

About the Author
Maurice Ross was born in Ireland in 1955. Made Aliyah in 2007, having lived in London, UK since 1965. Former Jewish community Professional and Educator.
Related Topics
Related Posts
Maurice Ross
Comments