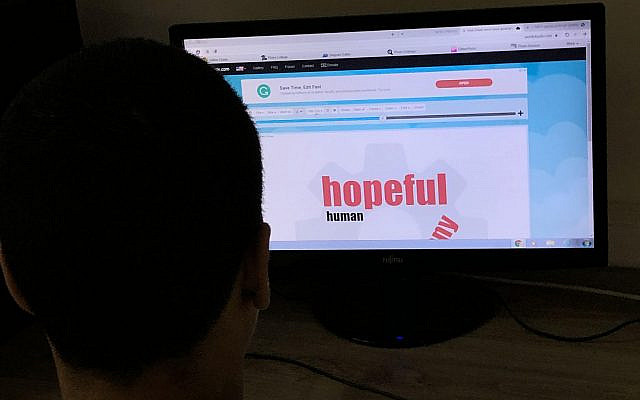 A young Arab citizen of Israel defining his identity as 'hopeful human.' (courtesy)

Following record third elections in a year, Israeli politics seem to be more of the same — gridlock, animosity, and sectoral selfishness.

Israel’s four major “tribes” — Secular, Religious Nationalist, Ultra-Orthodox, and Arab, are seemingly doubling down on their positions, rather than seeing these election cycles as signs of dysfunction, and reason to find avenues for collaboration.

Religious nationalists are emboldened by President Trump and moving to annex parts of the West Bank; ultra-Orthodox remain indignant over calls to join the army and have mobilized to make up past election losses; Arabs have refused to even entertain the thought of supporting a government that endorses any part of Trump’s peace plan; and the left remains largely secluded and immobile in its bubble.

Despite all of this, I remain hopeful — and there are many others like me.

Through my work at Shaharit, an Israeli NGO dedicated to building a more collaborative political future; as a facilitator in Arab-Jewish encounters; and through my time living in the mixed Arab-Jewish city of Lod, I have seen a different picture emerge under the surface, one of diverse Israeli citizens and leaders finding ways to collaborate with other groups towards a shared future, while maintaining their identities and traditions.

I’m hopeful because diverse citizens are joining forces at the local level, working across sectoral lines towards shared goals, and building the relationships needed for higher-level reconciliation. Right-wing Jews and Arabs in Lod formed a mixed Arab-Jewish governing coalition in the city council for the first time ever – something that happened in all six other “mixed” cities as well. Ethiopian-Israelis, Mizrachim (Jews from Muslim countries), and Ashkenazi academics united in Rehovot through Shaharit’s community organizing efforts, working together to lobby the municipality for extended day care hours and other local improvements.

I’m hopeful because key leaders from the Jewish religious nationalist community are voluntarily being exposed to diverse viewpoints in Israel, Palestine, and the Jewish Diaspora through a Shaharit program, gaining appreciation for and building solidarity with other groups beyond their own. These leaders have promised new action within their communities, and have continued meeting beyond the original program in order to convert their ideas into practical action.

I’m hopeful because new voices are entering the conversation around Israeli-Palestinian peace – religious, right-wingers, minorities – bringing new hope that a future deal would hold weight across the entire society, not just with a small group of traditional peaceniks.

I’m hopeful because every year, 20 young leaders representing the full diversity of Israeli politics and society undergo a year-long training in Shaharit’s 120 program, learning about each other’s communities, creating inter-sectoral partnerships, and considering how to build a more collaborative Israeli future through their leadership roles.

I’m hopeful because four female 120 graduates hold high and surprising positions in diverse political parties, each influencing their party in their own way (names withheld). One, an Arab Citizen of Israel, was the first woman to run for Knesset in the Islamist Ra’am party – and will almost certainly win a seat following the final election tally – impacting the discourse in the country’s most Islamist party by bringing a female voice and advancing her publicly stated belief in and hope for greater Arab-Jewish peace. Another, a Mizrachi woman from Israel’s periphery, ran on the Labor Party list in the fall 2019 election. The Labor party has traditionally focused on the country’s geographic center and the Kibbutzim, and was the face of the country’s Ashkenazi male hegemony for decades. The third, a Bedouin woman from the North, was the first Bedouin woman to ever be elected to an Israeli city council, and ran on the Knesset electoral list of the mostly-Jewish Democratic Camp.  And the fourth, a Mizrachi religious feminist, was elected to the Knesset as a member of the Religious Zionist party HaBayit HaYehudi, which has been traditionally dominated by Ashkenazi men.

I’m hopeful because ultra-Orthodox scholars, leaders, and activists representing an integrationist trend are gathering in a Shaharit program to understand and communicate how their community can maintain its traditions and values while better integrating with the society around them, reaching into the Jewish bookshelf to find new interpretations and planning action around their ideas.

I’m hopeful because religious feminists in the Shaharit network were elected to a religious council for the first time, elected mayor of the orthodox city Beit Shemesh, featured on a TV series, named to Knesset electoral lists, and are generally making patient progress within their communities.

I’m hopeful because I see the smiling faces of young Arab and Jewish high school students, learning negotiation skills together with the Pathways Institute, commiserating over teachers and homework, and recording dances for Tik Tok.

And lastly, I’m hopeful because there are others like me.

Some (many) would call me a naive foreigner. But there are hundreds of Israeli leaders and thousands of citizens in and out of the Shaharit network that, while sometimes hesitant, see the need for and value of working across sectoral lines towards a shared common future.

Because no one can group can run this country or region on their own. And if Israel’s social groups can’t figure out a way to do this together, there are many people here that know that the thousands year old Zionist dream, and the modern dream of a Jewish, Democratic, and Equitable state, might crumble before their eyes.

No matter the result of the upcoming coalition negotiations, I invite you to be optimistic with me, and to channel that optimism into building the Israel, and world, we wish to see.