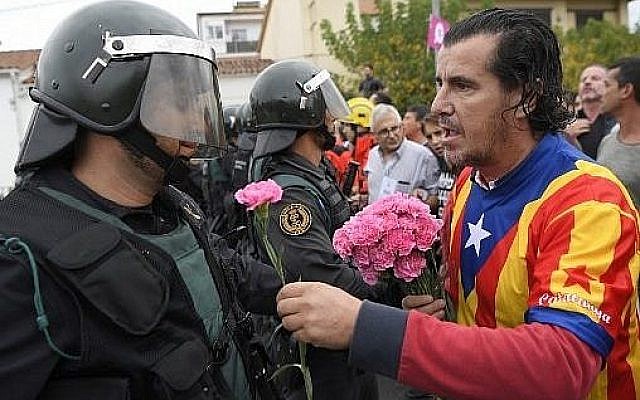 A man offers a carnation to a Spanish Guardia Civil guard in Sant Julia de Ramis, on October 1, 2017, on the day of a referendum on independence for Catalonia banned by Madrid. (AFP PHOTO / LLUIS GENE)

Eleven years ago, I was invited to serve as a reporter for an international youth conference in Barcelona. When I told the head of the press team I’d be brushing up on what very little Spanish I had, she told me I might be better advised to brush up on my Catalan.

In my defense, my Israeli high school education hardly mentioned Spain beyond 1492. Judging from the curriculum for my history matriculation exams, Europe ends at the French Pyrenees. So, in my ignorance, I was rather surprised to discover upon my arrival that indeed, the language spoken on the streets of this ostensibly Spanish city was not Spanish, but Catalan.

For those of you who are as clueless as I was: Catalonia is — or, I am tempted to say, was — an autonomous community in northeastern Spain, bordering France. Historically, the region was first consolidated under the County of Barcelona, which then unified dynastically with the Kingdom of Aragon in the twelfth century, and ruled over Aragonese territory for the next 700 years. However, it maintained a political structure, culture and language that were distinct from those of Aragon. In the eighteenth century, it was conquered by Castile, and has been under Spanish rule ever since; but even under the suppression of the Franco regime, the Catalans maintained their unique language, culture and identity.

I learned all this from a fellow reporter I met on my first night in Barcelona, whom we shall call Josep.

On the surface, Josep and I could hardly have been more different. I was a religious American-Israeli Jew who hadn’t had much contact with the non-Jewish world; he, a non-practicing Catalan Catholic who had never met a Jew or an Israeli before. As it turned out, though, both of us had been harboring an inexplicable fascination with the other’s background for many years before we met — I, with Spain and the Spanish crypto-Jews (of which he may be descended, but that’s another story); he, with Israel and Judaism. He was, in fact, in the process of writing a book about the media bias against Israel at the time.

Needless to say, we were truly delighted to meet each other, and our unusual friendship has since been immortalized in my blog and first book, Letters to Josep — a collection of letters I wrote to him about Judaism and life in Israel.

Josep was, as many Catalans are, polite and self-effacing, but he was also proudly outspoken about his identity as a Catalan and made no effort to hide his distaste for everything Spanish. Being pro-Israel was not his only unpopular opinion: he was pro-Catalan-independence long before it was cool. Back in 2006, the idea of secession was dismissed by most Catalans as a radical overreaction to the decades of tension between Barcelona and Madrid over cultural and economic issues.

The pro-secession movement Josep supported gained a great deal of momentum in recent years due to frustration over Spain’s lack of cooperation and willingness to engage in dialogue. In September of 2015, for the first time, Catalans elected a parliament that had a pro-secession majority and promised to hold a binding independence referendum within 18 months. That must be 18 months in Catalan time (which, I’ve discovered, is a lot like “Spanish time”), because here we are: on October 1st, almost exactly two years later, the 5.3 million citizens of Catalonia eligible to vote will cast their ballots on whether to unilaterally declare independence from Spain.

That is, unless Spain can stop that from happening.

Which it is hell-bent on doing.

The Spanish government, unsurprisingly, considers the independence referendum illegal and unconstitutional, and the Catalan government’s efforts to hold it anyway an affront to democracy and the rule of law. Spain has a lot to lose: Catalonia constitutes only 6% of the country’s territory and 16% of the population, but it accounts for one-fifth of economic output and 25% of exports.

In the week and a half before the referendum, the Spaniards seized control of the Catalan treasury and tried to take over the Catalan police force, effectively overriding Catalonia’s autonomy. Spain has amassed police forces in Catalonia, leaving the streets of Madrid unprotected against thieves and criminals in favor of intimidating potential Catalan voters. Apparently, they see Catalans with ballots as a greater threat to public safety.

Thus far, the Catalans have responded to all this the way Catalans do: peaceful and elegant protest. In response to the seizure of posters, Catalans printed flyers at home and plastered them all over public spaces; some even marched through the streets dressed up as “human posters.” Protests intensified after the Spanish Guardia Civil’s massive September 20th operation of arrests and raids. In response to the seizure of the official referendum ballots, major pro-independence organizations distributed replacements. Catalan president Carles Puigdemont has pledged that the vote will take place on October 1st, but the government has been forced to shroud their plans in secrecy to avoid being thwarted by the Spanish government. On Friday, they unveiled part of the plan, and said that even if the polling stations are closed — as the Spanish government vowed they would be — Catalans would be able to vote, though they did not disclose how. Citizens camped out in public buildings starting Friday night to ensure that the polling stations would remain open. While I was pleading with God to seal us all in the book of life at Kol Nidrei, Josep was preparing to spend the night at his kid’s school in a suburb of Barcelona.

The irony is that if Spain had done literally nothing about the vote, Catalonia probably would have remained in Spain. Polls in July were showing that support for independence had dropped, with the majority planning to vote against independence. If the Spaniards were smart, they would have focused on convincing Catalans to vote “no,” guaranteeing that the referendum would come out against independence and fostering dialogue and cooperation. Instead, they decided to address the problem Erdoğan-style… and that’s been pushing Catalans over to “yes.” A recent poll predicted a 60% turnout for the vote, and a decisive victory for “yes” with a 70% majority. Catalans are tired of being knocked around by the Spaniards, and this latest show of flexing muscles emphasizes to them exactly why so many people want to secede in the first place.

I watched these events unfold with growing levels of dismay and anxiety, but most of all, I was annoyed that it took so long for the Israeli and Jewish media to pick up the story. It felt like I was the only Israeli who cared. And then, of course, when the JPost finally published something, it was this absurd BS-fest of an op-ed by Juan Carlos Girauta, a member of the far-right, post-nationalist Ciudadanos Party, regurgitating the party line of the Spanish government.

My, how the tables have turned.

I am reminded of a story Josep told me about a political science class of his in college, where he watched all the other students stand up and propose some kind of project to support the victims of the evil Israeli aggressor. He hadn’t thought of a project yet before class, but listening to all his classmates gave him an idea: after everyone else had spoken, he finally stood up and told his teacher that he would be taking on a project to support the Israeli children who were victims of Palestinian terror.

I’ve been thinking a lot about that scene, and all the other times he stood up for Israel when no one else would, in the past few weeks as I tried desperately to get other people in my circles to care about Spain’s suppression of human rights in Catalonia.

I know that certain left-wing parties driving the secession movement are anti-Israel and contaminated with anti-Semitism, and I have no illusions about an independent Catalonia being any better for Israel or the Jews than a united Spain has been. I also don’t know what kind of implications Catalan independence might have in the greater context of growing anti-EU sentiment and other nationalist movements in Europe, and I certainly don’t know enough to make a judgment on whether independence will be good for Catalonia in the long run.

But I don’t pretend to have an impartial, well-informed opinion about Catalan independence. I am unapologetic and unrepentant in my bias. It’s important to me because it’s important to Josep — a good friend who has been dreaming of this day for as long as I’ve known him, and who has often stood alone in defense of my country. It’s only natural for me to want to do the same for his. Still, it’s not just friendship that fuels me to speak out for Catalonia now.

Catalonia is a mature and robust democracy, a nation with its own language, a thriving culture, and a long history with no small amount of suffering and oppression at Spanish hands. They have a right to decide their future. Spain’s tyrannical reaction to the Catalan push for independence only serves to emphasize why Catalonia may be better off without them.

About the Author
Daniella Levy is the author of Disengagement, By Light of Hidden Candles, and Letters to Josep. Her prose and poetry — in 3 languages — have been widely published, and she was nominated for the Pushcart Prize for her short fiction. She is also a freelance copy and content writer. Born in the USA, she immigrated to Israel as a child, and currently lives at the edge of the Judean Desert with her husband and three sons. You can learn more about Daniella and her work at Daniella-Levy.com.
Related Topics
Related Posts
Comments