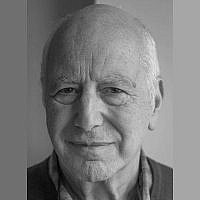 The Blogs
Jeffrey Newman
Apply for a Blog
Please note that the posts on The Blogs are contributed by third parties. The opinions, facts and any media content in them are presented solely by the authors, and neither The Times of Israel nor its partners assume any responsibility for them. Please contact us in case of abuse. In case of abuse,
Report this post. 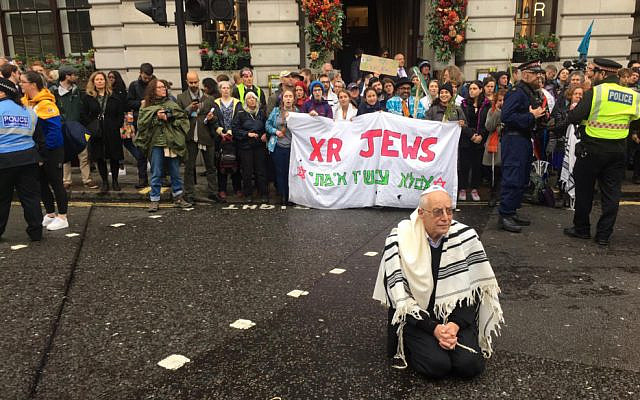 I am now wearing a kippah. Yes, I know this is a rather bizarre statement from a rabbi, but I was a progressive rabbinical student in the ’60s and have until recently only ever worn a kippah when undertaking clearly religious tasks. Question 1: What changed?

The kippah is prominent in the videos and photos of my arrest last week, as are the tallit and the lulav and etrog: it was, after all, Sukkot! Question 2: Why was I arrested?

For both answers, allow me to explain.

It’s long been clear that we and our continually growing global population are decimating our planet, all species, and even changing the climate. Scientists whose work led to the signing of the 2015 Paris Agreement said we must steeply bend global carbon emissions by 2020 to have any chance of keeping global warming beneath 2 degrees, let alone 1.5. Already we see increasingly devastating fires, hurricanes, flooding, droughts, crop failures, vast migrations and we have not 11 years but 18 months.

This a Jewish problem. We are an ancient people. We have outlived the crumbling of civilisations and vast empires. We have suffered and been refugees. We are resilient, creative, dynamic and energetic. We have survived. Our traditions and teachings, our customs and commandments, have kept us alive. We are an indigenous diasporic people, perhaps the first.

I began wearing my kippah at a recent conference of indigenous people, attended by elders and grandmothers from all parts of the world, wearing their traditional costumes. Why, I wondered, was I not also wearing that symbol of the people to whom I belong?

So I began to wear a kippah and have done so ever since, partly also because there is a clear rise in overt antisemitism and this is a small, token response. More important is that each time I have to adjust the kippah, I find myself thinking of God. 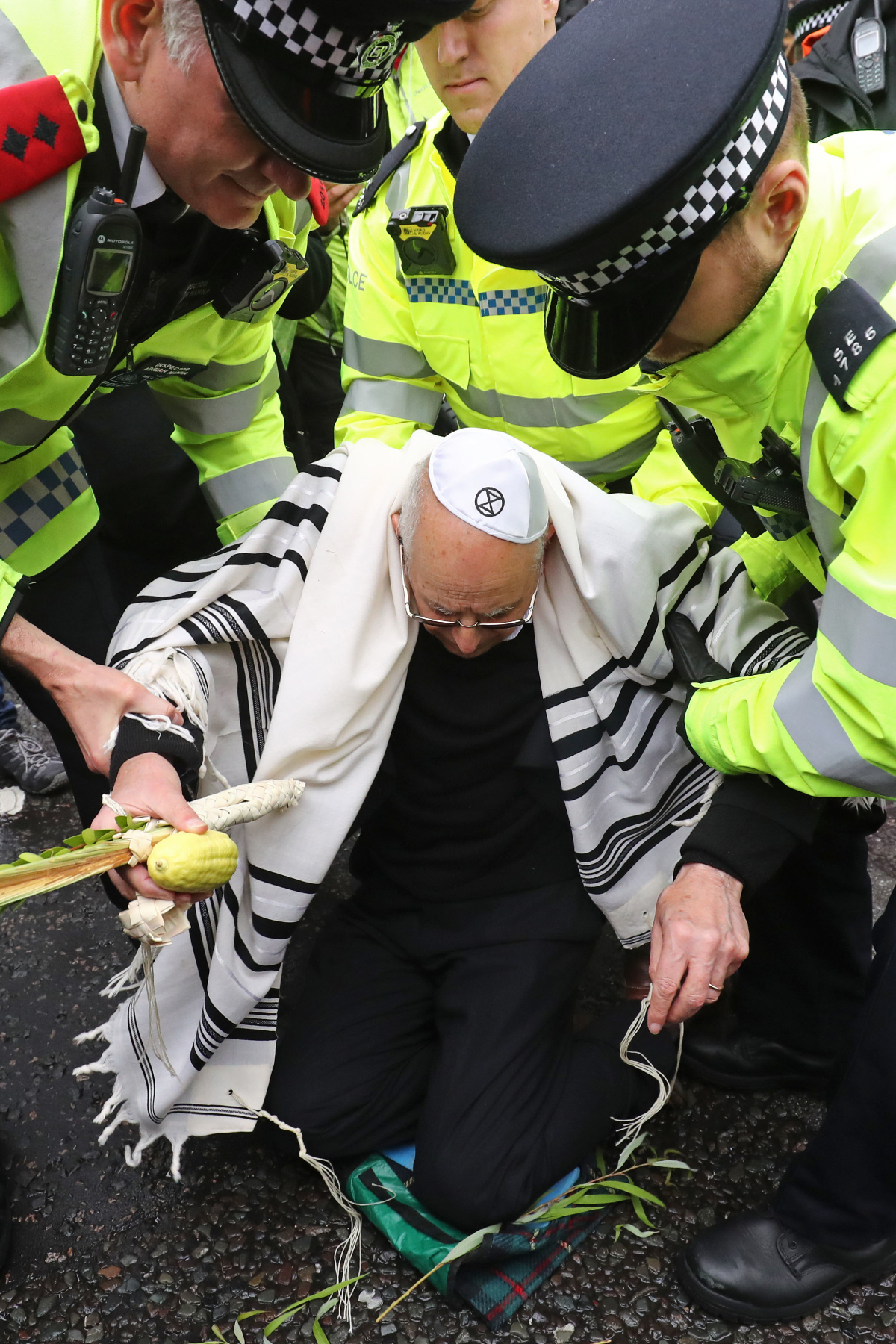 Rabbi Jeffrey Newman is arrested as protesters continue to block the road outside Mansion House in the City of London, during an XR climate change protest. (Gareth Fuller/PA Wire via Jewish News)

We are an indigenous people exiled from our land for more than 2,000 years. On the first day of the Festival of Sukkot, the Bible tells us that ‘we shall take the produce of hadar trees, branches of palm trees, boughs of leafy trees, and willows of the brook,’ (Lev. 23:40) and then dwell in booths for seven days.

Micah and Isaiah teach that people ‘shall beat their swords into plowshares and their spears into pruning hooks.’ Idealistic it may be but it is the Jewish dream of shalom — of peace, of complete wholeness for our world. It concludes that people shall sit ‘under their vines and under their fig trees and none shall make them afraid.’

Notice the agricultural themes, time and time again: the land is the foundation and all creation rejoices as the mountains skip! We Jews have a key role to play in the rebuilding of our global societies.

The most recent inter-governmental climate change conference was held in Katowice in Poland, just 25 kilometers (some 15.5 miles) from Auschwitz, so I went. It was chastening. We Jews cannot be bystanders in the greatest potential tragedy facing humanity and all nature — the Sixth Mass Extinction, which is already beginning, as we wipe out more species faster than at any time in history.

Geologists call this age the Anthropocene, in that it is humans who are now changing the face of the planet. Before, it has always been cycles of nature. 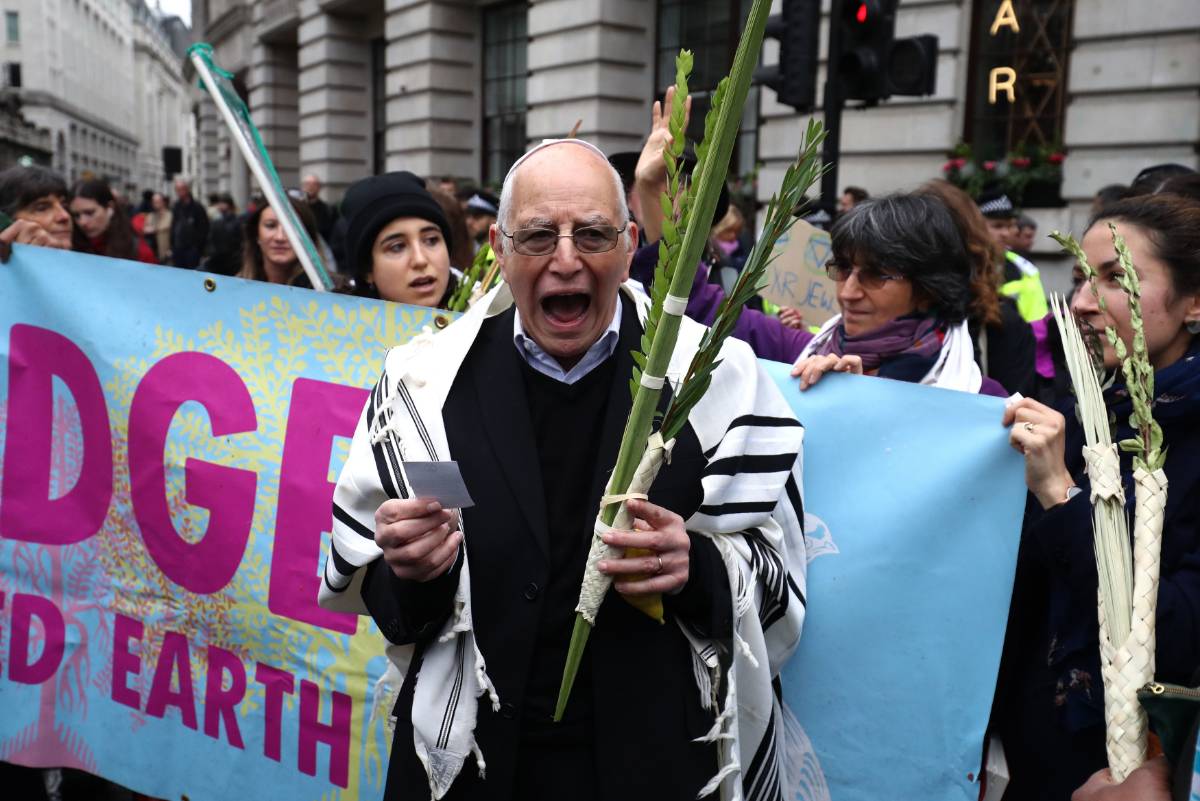 Twice every day in the Shema, we read that if we turn aside and worship false gods (of greed and envy, of wealth and success) the heavens will become closed and there will be no rain. These are inevitable consequences to false choices, of following short-term selfish gain, rather than true values and principles.

Extinction Rebellion, civil disobedience and arrest may itself only be a short term, attention-seeking means of raising issues. How can we move forward in the very short window of opportunity we now have to begin to construct a new path?

We need vividly to portray the new world for which we are working, as portrayed in our traditions — a world of collaboration as envisaged by the Earth Charter (2000) and the Sustainable Development Goals, with time for one another, care for families, the disabled, the elderly, living wages, preservation of communities, species and trees, secure food and water supplies for all, and adaptation to coming climate changes.

Faith communities can give a lead. We have the knowledge and technology. Have we the will? Then justice will flow as waters and righteousness as a mighty stream (Amos 5:24).