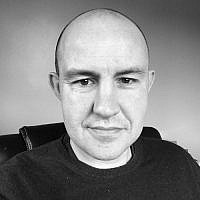 The Blogs
Euan Philipps
Apply for a Blog
Please note that the posts on The Blogs are contributed by third parties. The opinions, facts and any media content in them are presented solely by the authors, and neither The Times of Israel nor its partners assume any responsibility for them. Please contact us in case of abuse. In case of abuse,
Report this post.

Last July I was appointed Chair of my local Constituency Labour Party.  I felt very proud to take on the role, my most senior position in five years of party membership and a lifetime of Labour support and campaigning. Fast forward to last week, and I felt I had no choice but to step down, and on Friday I formally resigned. What happened?

The answer is the institutionalisation of anti-Semitism in the party.  In March 2017 myself and others established Labour Against Anti-Semitism, made up of current and former Labour members, both Jewish and non-Jewish, dissatisfied with the increasingly prominent discrimination against Jews within the party. Our objectives were to report anti-Semitic Labour members and to raise awareness of the issue. We believed that providing overwhelming evidence of the racial hatred we were witnessing would spur the party to act.  At our most recent count we have reported 1,200 party members to Labour’s compliance team.

Over the course of the year anti-Semitism within the party membership has become normalised. Attendees of the party conference in Brighton last September reporting an uncomfortable atmosphere where anti-Semitic tropes were repeated and applauded. The meeting where Holocaust denial was discussed as an area of debate exemplified a party that had badly lost its way.  In December, at a JLM event, Jeremy Corbyn promised that he was committed to zero tolerance of anti-Semitism in the Labour Party. He was loudly heckled as a liar.

Our sense of optimism that change could come internally was dealt a serious blow in January when the hard left took over Labour’s NEC, the body charged with overseeing, among other things, party discipline.

The sitting Head of the Disputes Panel, Ann Black, was deposed and Christine Shawcroft, a supporter of Tony Greenstein and Ken Livingstone, was appointed in her place – and was a disaster.  She finally stood down after appearing to defend the Holocaust denier, Alan Bull, who was standing as a Labour council candidate in Peterborough. Her mooted replacement, Claudia Webbe, has also defended Livingstone, most notably in 2005 when he accused a Jewish reporter of behaving like a concentration camp guard. The NEC appointed Jennie Formby of Unite as the new General Secretary and she will now be tasked with a new anti-Semitism policy – despite having allegedly employed a Labour member suspended for anti-Semitism in 2017.

Is Labour institutionally anti-Semitic? When you look at the NEC and apply the definition as given in the Macpherson Report (‘The collective failure of an organisation to provide an appropriate and professional service to people because of their colour, culture or ethnic origin. It can be seen or detected in processes, attitudes and behaviour’) the use of the term is not hyperbolic. This is a body that is unable to deal with the scale of the anti-Semitism around it, that is either unwilling or unable to act.  I resigned because I could no longer pretend to myself the Labour Party was anything other than what it is, because I was sick of the lies and the empty rhetoric and the stench of racism – and I had to speak out.  Although the situation worsens (we have a backlog of over 1,000 members still to report) our group will not be bullied, we will not be silenced, and we will continue to scrutinise everything the party does. Enough is enough.

About the Author
Euan is spokesperson, Labour Against Antisemitism (LAAS). He fights for an anti-Semitism-free Labour Party by reporting and highlighting Labour anti-Semitism.
Comments