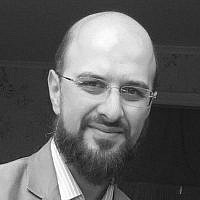 The Blogs
Usman Khan
Apply for a Blog
Please note that the posts on The Blogs are contributed by third parties. The opinions, facts and any media content in them are presented solely by the authors, and neither The Times of Israel nor its partners assume any responsibility for them. Please contact us in case of abuse. In case of abuse,
Report this post.

''The need of the hour is for us to knock down the barriers of fear that divide us.'' #CaliphofPeace

This weekend more than 30,000 Muslims will gather in the English countryside to listen to the Caliph of Peace, Hazrat Mirza Masroor Ahmad. ''The need of the hour is for us to knock down the barriers of fear that divide us.'' #CaliphofPeace #Islam #AhmadiyyaComing Soon ● #JalsaUK ● 3-5 Aug 2018.

35,000 Muslims gathering in the English countryside would usually draw concern and a lot of attention. But since their objective was to oppose and condemn all forms of extremism, it has gone by fairly unnoticed. I have attended this annual convention for many years and it has been pivotal in shaping my views and attitudes on humanity and religion. In particular it has taught me that one of the core teachings of Islam is to protect and preserve life, and to do so is akin to saving all of humanity (Quran: ch5, v33).

Despite such teachings of peace, recent times have seen a global upsurge of violent political activism in the name of Islam. This is a threat to everyone and being a Muslim doesn’t grant me special protection from terrorist attacks. I too worry for my family’s safety on the streets of London, and often prompts me to wonder how I would react if ever caught up in a terrorist incident; would I run and hide like a sensible person should, or would I stand to confront, protest and try stop the murder of fellow citizens? It’s difficult to know, and even though I certainly aspire to heroism, I’m in no rush to discover if I would live up to the courage of my convictions.

Having studied Middle Eastern politics, I know that social and political grievances are the causes of terrorism and not Islam; however, I strongly feel that Muslims must lead the fight against certain extremist ideologies. But I worry such efforts are hamstrung by the views of many mainstream Muslim leaders. Their opinions on issues like apostasy, the treatment of minorities, rebellion against non-Muslim governments, Jihad or even the militancy of the 2nd Coming of Jesus, undermine the counter-narrative to groups like ISIS. The furore over the “Messiah Has Come” billboards in the UK is a case in point. Muslim leaders must seriously reflect on some of their theological interpretations if they wish to challenge extremist mindsets.

The summer convention I attended, organised by the Ahmadiyya Muslim Community is known as the ‘Jalsa Salana’ and took place between 3rd-5th August 2018. It has been successful in re-iterating and instilling Islam’s peaceful values in the minds of participants since its inception. As an ordinary Muslim, taking part is my way to support efforts to remove hatred from the world around me.

It is however wrong to believe extremism is solely a Muslim issue. In fact, it is prevalent throughout sections of our non-Muslim populations. The EUROPOL terrorism report highlights that ‘Separatist’ groups in 2017 were responsible for 67% of terrorism across the EU. Furthermore, over the same period in the UK 82% of terrorist incidents (88 out of 107) were by Irish dissident groups; why is this not newsworthy? Extremism is also manifested through hate crimes. The Home Office reports that between 2016-17 over 80,000 hate incidents were recorded in England and Wales, 85% of which relate to race and religion. It’s staggering but not surprising, since media outlets often give platform to those who demonise minority groups, with no serious steps taken to deter such cultivation of hate. The authorities rightly curtail the freedom of speech of individual hate preachers, so it puzzles me why the more influential media is given a free pass. If we genuinely wish to eradicate hate from all sections of our society, then we must recognise and address the problem wherever it occurs. It is however encouraging that some social media companies have taken steps recently to counter such dangers on their platforms.

The gathering of over 35,000 Muslims this summer is a small yet important contribution to a civil and peaceful atmosphere; but unless the Government, the media, and every individual plays an active and positive role for this, it is inevitable that soon enough, we and our families will be forced to confront the consequences of some form of extremism.

About the Author
Usman has an MSc in “Middle East in Global Politics: Islam, Conflict and Development” (Birkbeck, University of London). He is passionate about Islam, social affairs, human rights and pluralism, with over 15 years’ experience working on youth development. Usman researches, writes and commentates on subjects related to extremism, counter-terrorism and Islam in Britain. Follow Usman on Twitter: @ibne_khalid
Related Topics
Related Posts
Comments