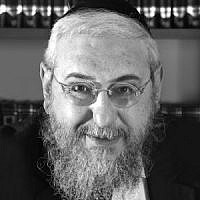 The Blogs
Haim Amsellem
Apply for a Blog
Please note that the posts on The Blogs are contributed by third parties. The opinions, facts and any media content in them are presented solely by the authors, and neither The Times of Israel nor its partners assume any responsibility for them. Please contact us in case of abuse. In case of abuse,
Report this post.

In order to truthfully examine my connection with the Jewish Home party, we’d have to look back almost six years ago. At a time when I served as a member of Knesset for the Shas party, I realized that the Shas movement was not able to contain my ideological and political opinions. I had always held that we should never blur our Sephardic identity. We must be the benchmark for Mizrahim (Orientals) that are and were always both Zionist and supporters of Torah, that we should preserve the customs of our ancestors and incorporate their traditions of religious commitment and study while simultaneously being working individuals and providing for our families. However, as I said — these views were unfortunately alien to the Shas movement, where, by the way, Rabbi Ovadia Yosef ob”m himself had personally called me to join its Knesset list.

Following my resignation from Shas, I decided that I would continue fighting for that vision by founding the “Am Shalem” movement. It’s an ideology that tens of thousands share: Torah and employment, Torah and education, a moderate Judaism, military service for all, fighting assimilation, a lenient conversion process and much more.

“Am Shalem” ran in elections for the 18th Knesset, but unfortunately, despite receiving 50,000 votes, we came up short and could not pass the needed electoral threshold to enter the Knesset. Jewish Home had contacted me in the past via the late Minister Uri Orbach and others, but things did not work out then. Six years later, things have drastically changed, and here I am.

Are you the “Tzipi Livni” of this sector — the political zigzag between “Right and Left”?

There is a big difference between those who completely change their outlook and ideology, those that fit their agenda to the platform in which they find themselves. I personally saw this many times when I served in the Knesset where tens of politicians switched between various political parties. No candidate and party are exact fits. From the first day I decided to enter the political arena, I have never changed my views.

Let’s not forget, Minister Naftali Bennett and Minister Ayelet Shaked were both previously linked to the Likud party. In 2011, they together co-founded and established the “My Israel” extra-parliamentary movement. Only after that did they come to the “Jewish Home,” eventually assuming its leadership and successfully raising the party’s profile, thank G-d. Indeed, it is possible to make transitions in politics without damaging one’s positions or principles.

What are your thoughts regarding the results of the Biton Committee (which began the process of enriching Mizrahi culture in the Israeli education system)?

First and foremost, establishing the Biton Committee is a significant milestone in creating a much-needed bridge between the political establishment and Sephardic Jewry. The establishment of the committee by the Minister Bennett is an important effort that created mutual trust between groups, despite the criticisms that still exist — and it’s okay to have criticisms. I am not aware of all the findings of the committee, but from the little I’ve been exposed to, I see that there is a real desire to change the discourse in Israel — to educate the next generation of students in view of the fact that Sephardic Judaism and the legacy of Mizrahim is not just exotic songs at joyous occasions, but a glorious heritage, with impressive personalities and characters that were immersed in Zionism and the founding of the State of Israel. 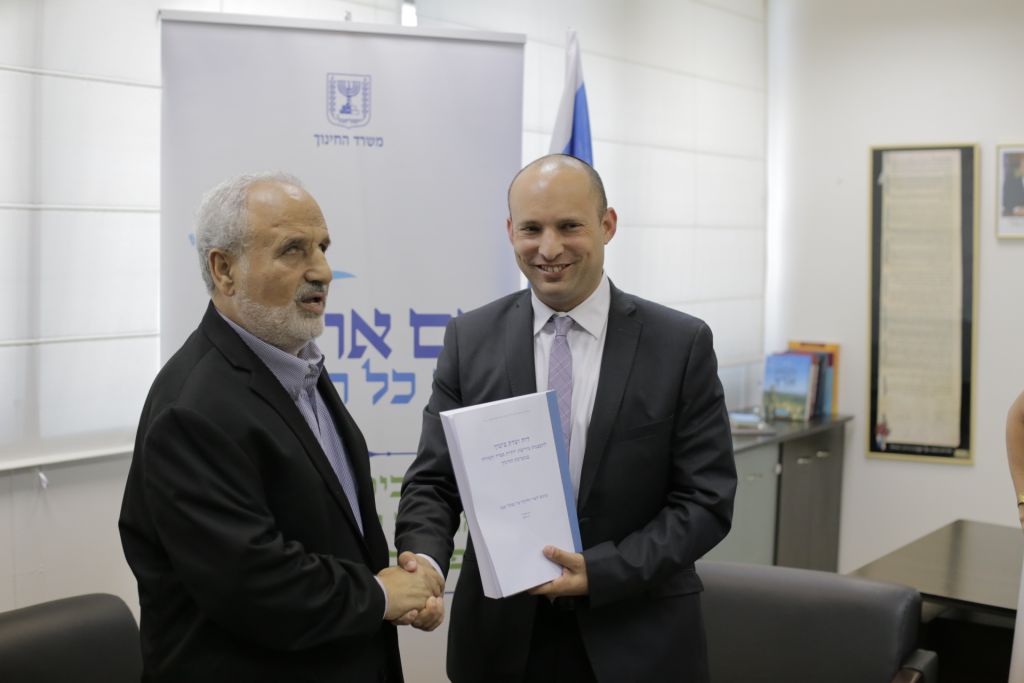 What happened between you, Shas, and its political establishment?

To paraphrase a comment Benjamin Netanyahu once made to Rabbi Ovadia Yosef ob”m, it can be said that the Shas party has forgotten what it means to be Sephardic. When you strive towards an identity that is not yours for the taking, you put on a mask that eventually becomes your identity; it becomes extremely difficult for you to represent the public that voted for you. There are excellent people within Shas. However, the existing leadership bows to the extremist Lithuanian elite (Litvish-ultra-Orthodox Ashkenazic yeshiva world) and forgets who its voters are. Essentially, we can say that a new identity has been created, a “Sephardic Litvish” identity. Shas chairman Arye Deri may have wonderful charisma, but throughout his leadership, the party has simply forgotten the authentic Sephardic identity.

When I served as a member of Knesset with Shas, the “seminary discrimination” episode exploded, where deserving Sephardic girls were not being accepted into prominent Ashkenazic seminaries and institutions. Shas’s chairman issued a directive to members of the party that while this issue is in the news cycle, we should ignore or refuse interview requests. I came to a decision that the situation cannot proceed — we are part of a nation.

I could not allow these students to sit at home for the next six months waiting for their application to be revisited. I told the families of these students not to worry, and that I would personally handle and take care of the situation. This immediately aroused the ire of Shas leaders, and the rest is history.

The Jewish Home represents the values and practice of Torah and employment, and conscripted military service. How do I see myself living within this approach?

The answer is simply within the question! This approach is the general view of our society. Five of my children have honorably served in the IDF, a few of them in combat units including one in an elite unit. For seven years, I was the Sephardic Chief Rabbi of the Sharsheret region formed by the religious Zionist workers’ movement. I know the Religious Zionist movement to perfection. Moreover, I constantly advocate implementation of the teaching of the Sephardic rabbis who always knew how to integrate honorably earning a livelihood and Torah study. I have always held that there have never been any contradictions between the two. I constantly work towards the integration of as many young people as possible that are anxious to join the army within the framework. Those who are able to sit and learn properly and truly grow towards becoming a Torah scholar should do as such. But for the vast majority of students, who do not proceed as such, they should do their national service and then integrate and contribute to society.

What are your plans for the future? Do you still plan on running for the “Chief Rabbi of Jerusalem” position?

Currently, I am fully concentrating on the goals of the party, bringing new audiences and voters to the party that have unfortunately had to find their political homes in various places and settings. It’s hard work but our labor is already bearing fruit. I plan on G-d willing running a successful campaign and getting elected to the Knesset with the Jewish Home party.

What is your vision?

I want to succeed in promoting the issues that I have until now dealt with mostly as part of my public life and my writings. I would like to do it within the Jewish Home’s national framework together with other members of the party: a lenient conversion process, equal military service, fighting assimilation, Torah and employment, serving as a bridge to all of Israel communities and more. Only together can we “restore the crown to its former glory”, but this time — we will make it a reality.

Rabbi Haim Amsellem in the Jewish Home — “Restoring the crown to its former glory,” but this time — we will make it a reality (Courtesy of Rabbi Amsellem)

A Torah scholar and prolific author and politician, Rabbi Haim Amsellem graduated Yeshivat Kisse Rahamim and was ordained as a rabbi at 20-years-old by the dean of the yeshiva, Rabbi Meir Mazuz and the late Rishon LeTzion, Rabbi Ovadia Yosef. He has served as chief rabbi in various communities in Israel and the Diaspora. A founding member of the Shas party, Rabbi Amsellem was elected into the Knesset in 2006 and again in 2009. Following differences with party leadership, he resigned from Shas and with a renewed Zionist vision established the Am Shalem movement, combating religious extremism, fighting for equal army service among all Israelis, and much more. Rabbi Amsellem recently launched his candidacy for the Jewish Home party, in hopes to enter the 21st Knesset. Please visit his website at: http://www.amsalem-mifkad.com/.

About the Author
A renowned Torah scholar, prolific author and politician, Rabbi Haim Amsellem graduated Yeshivat Kisse Rahamim and was ordained as a Rabbi at 20 years old by Dean of the Yeshiva Rabbi Meir Mazuz and the late Rishon LeTzion Rabbi Ovadia Yosef. He has previously served as chief rabbi in various communities in Israel and abroad. A founding member of the Shas party, Rabbi Amsellem was elected into the Knesset in 2006 and again in 2009. Following differences with party leadership, he resigned from Shas and with a renewed Zionist vision established the Am Shalem movement, combating religious extremism, fighting for equal army service amongst all Israelis, a lenient and less rigorous "conversion" process and much more. Rabbi Amsellem has recently launched his candidacy for the Jewish Home party, in hopes of entering the 21st Knesset. Please visit his website: http://www.amsalem-mifkad.com/.
Related Topics
Related Posts
Comments