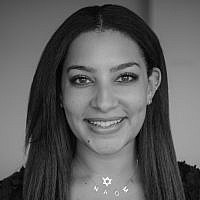 The Blogs
Naomi Ravick
Apply for a Blog
Advertisement
Please note that the posts on The Blogs are contributed by third parties. The opinions, facts and any media content in them are presented solely by the authors, and neither The Times of Israel nor its partners assume any responsibility for them. Please contact us in case of abuse. In case of abuse,
Report this post.

Growing up in Montgomery County, Maryland, Judaism was a part of my identity I always took for granted.

Montgomery County is home to more than 100,000 Jews, about 10% of the county’s population. It meant that I was surrounded by a strong, vibrant Jewish community that rarely felt threatened. I have always felt that safety in numbers was indisputable, and that weakness and vulnerability most often stem from isolation. Until I left for college, I never considered that being Jewish might make me feel like an outsider. The word antisemitism wasn’t even in my vocabulary.

But on Dec. 17, my alma mater, Walt Whitman High School in Bethesda, was vandalized with antisemitic graffiti. To see ‘Jews Not Welcome’ on a sign that I drove past every day for four years was heartbreaking. I want to be able to say that it is surprising or shocking.

Whitman was hardly idyllic in my experience. Microaggressions – slight, under-the-radar instances of hate – mostly stemming from ignorance–were not uncommon. It left me with the unshakeable feeling that I was different from my classmates – but not because I was Jewish.

Part of what allowed me to find common ground was my Judaism. It was a safety net when other aspects of my identity were isolating. Despite a lifetime of being an “other” in predominantly white spaces, it would have never occurred to me that in that place, my Judaism would also make me vulnerable or unwelcome.

After high school, my role in the Jewish community evolved. I joined Hillel during my freshman year at NYU – the second most Jewishly populated private university in the US I served two terms as Hillel co-president and saw the need for young Jews to lead – the catalyst that launched me into a career in Jewish advocacy with American Jewish Committee (AJC). I work every day with young people – from high schoolers to college students, to young professionals as they engage on the issues most pressing to the Jewish people.

There has been a lot of talk about how we need to give the next generation of Jewish leaders the tools to tackle the complex and often fraught landscape they must navigate. But I have seen that it is not just about training young Jews for the future – it is about this generation, our generation. Young people are on the front lines in the battle against vitriol and bigotry. And they have just as much power to fight back. I feel lucky to work every day to help those students find their voices.

When I saw the photos of the graffiti saying, ‘Jews Not Welcome’, I knew those words were directed at me and my community. For a brief moment, I allowed myself to be swept into the current of hate and in that instance, I felt the crushing gravity of what it means to be a Jewish person under attack in America today.

Over the summer, I traveled to Germany with a group of AJC fellows as part of a program that allows young Jews to explore Germany post-Shoah and experience the ways in which modern Germany grapples with its past. That included visits to Dachau and Sachsenhausen.

What will stay with me most is the visceral feeling of not only being able to visit a concentration camp but to also be able to walk out. That is something that generations before me could have never imagined. As a biracial Jewish woman that is the feeling I choose to carry with me. That is our power.

The hate, the microaggressions, and the vitriol can be debilitating, but we must refuse them the right to define us. When a sign appears at Walt Whitman High School saying I am not welcome, I reject that very notion. I carry this strength because of my work, because of my beautiful and full Jewish life, and because of all that I have learned.

My worldview has evolved immensely since my time at Whitman. The forced reckoning of our place in society because of those that hate us is a unique and binding experience. It is that experience alone that motivates me to create change, call out hatred in all forms, and address antisemitism wherever we find it.

I have the opportunity to go to work every day and strive to show this generation of young leaders how to live as proud Jews. I can show them the sanctity of “never again” and impress upon them the weight of what it means to walk out into the world and use their voices to be present, participating members of a Jewish community that can – and must – never be taken for granted.

About the Author
Naomi Ravick is the manager of the Alexander Young Leadership Department at American Jewish Committee.