Last night I spend the night in jail (actually most of the night in the hospital), because I refused to accept a 15 day restraining order that would have kept me from protecting Palestinian shepherds. There actually is a connection with this week’s Torah portion, one of the most moving portions in the entire Torah. I often say that it would be incredible hubris to compare ourselves to the spiritual giants who went before us, but we have the ability and obligation to stand on their shoulders. Perhaps today I was standing on Yehuda’s (Judah’s) shoulders.

In parashat “Vayigash” Judah finally learns to take responsibility, and care about others. Recall how, two weeks ago, he suggests selling Yosef (Joseph) into slavery, without a thought of what it will do to their father, Ya’akov (Jacob). Last week he promised to take personal responsibility for Benyamin (Benjamin), because Yosef has made bringing Benyamin to Egypt a condition for the family being able to purchase more food during the famine. Grieving for 20 years because he believes that Yosef is dead, Ya’akov has been reluctant to send Benyamin, and makes it clear that he will die of grief if anything happens to him. When Yosef frames Benyamin, and declares that Benyamin must stay as his slave, Yehudah who didn’t think about his father in the past, now says, “Please let your servant (Yehudah) remain as a slave to my lord instead of the boy, and let the boy go back with his brothers. For how can I go back to my father unless the boy is with me? Let me tot be witness to the woe that would overtake my father!” (Genesis 44:33-34).

As important and legitimate as it is to look after our own welfare, there are times we must make our own personal welfare secondary to the welfare of others. Every parent who sacrifices for their children (and doesn’t really see it as a sacrifice) knows this.

Yehudah gives a long peroration in making his case to Yosef. Our retelling the story is drawn out even further because we split Yehudah’s plea into two aliyot. (On Shabbat we divide the portion into seven.)

I am simply long winded, but I gave the police a long and detailed explanation of why I grabbed the reins, and why I could not agree to being banned from the area for 15 days:

I opened by citing Pirkei Avot 2:5, “When nobody is acting with basic human decency, you must strive to be the one who does.” I also cited Israel’s “Do not stand idly by the blood of your fellow human being” law, obligating us to take all reasonable actions possible to prevent crimes.

Malakhei HaShalom is an outpost, that even Israel considers illegal. The Bedouin shepherds, originally from the Negev, but who fled/were forced out even in the 1950s, have been there for over 30 years. They lived more or less harmoniously with the army, until the settlers showed up. Since then, they have been continually harassed. The settlers consciously use flocks to fight flocks, in their effort to expel and dispossess. Lately they have taken to racing their all-terrain vehicles and horses around, or even through the flocks. Sometimes they bring boom boxes, and play loud music. The sheep are often frightened an scatter. Pregnant sheep can have spontaneous miscarriages. In addition to abusing the Bedouin, and denying them a livelihood, this violates Tza’ar ba’alei khayim, abusing animals, forbidden in both Jewish and Israeli law.

The first obligation is to try to get the responsible authorities to prevent a crime, before taking matters into our own hands. We have tens of documented and recorded attempts to bring the army and/or police when the shepherds are being harassed. Either the forces don’t show up, or they come late, or they say their vehicles can’t manage the way to where we are, or they stand idly by. If the security forces would do their job, we wouldn’t need to be there. There have been cases when settlers have lied and claimed that the Palestinian shepherds tried to steal their sheep. In some of those cases the army have brought the Palestinian suspects to where the police were waiting in their vehicles not fit for the terrain. I know of no case where they have done that for Jewish suspects. Trying to get the security forces has not worked up until now.

We are often told that, if the police didn’t manage to see the attacks and harassment, they can’t do anything. The victims must come in to the station and lodge a complaint. When one shepherd did so, the shouts of the officer taking the complaint could be heard down the corridors. He berated the shepherd, humiliated him, and threatened to arrest him. On the way home, that shepherd asked, “Why did I bother complaining? I will never do it again.” When I suggest that other victims lodge complaints, I am told, “Don’t you remember what happened last time?” Our fellow human rights organization “Yesh Din” helped the shepherd to lodge a complaint against the officer. Nothing came of it. Lodging complaints doesn’t seem to be an option.

On the day in question – the 20th of November – the Bedouin, as usual, were taking a path to avoid the settlers and their flocks. We watched as some of the troubled youth the state incredibly allows to be housed in an illegal outpost, and who don’t go to school as far as we can tell, abandoned their flock at least a kilometer away, to come after us. Clearly, their only intent was to harass and to intimidate. We ran around, trying to stand between the flocks and the charging horse. We called on the youth to leave the flocks alone. Soldiers who arrived stood by and watched. We asked them to do their job, to no avail.

We have been told in the past that the settler behavior is simply exercising their freedom of movement and expression. I was being interrogated on suspicion of having interfered with the youthful rider’s freedom of movement. One of the first things I learned from my mother z”l was “Your right to swing your fist ends where somebody else’s nose begins.” That young man had no right to freedom of movement in order to harass and terrorize people and animals.

One of the flocks moved away, and the rider and an outside activist from “Im Tirzu” went after them. I and another activist raced to stand in between. My fellow activist was pushed to the ground several times. I took her to lodge a complaint later that day. It seems that the settlers came up with a counter-complaint. She was called in for questioning a week later, suspected of having pushed the person who pushed her. I was called in on Thursday, over a month after the incident.

With the rider on the horse about to go after the flock again, I grabbed the reins of the horse. (Pushing our activist approximately at 9 minutes. I grab the horse around 9:40) Every time the rider and others who joined demanded that I release the horse, I demanded that they leave the flock alone. (One of them knocked my kippah off my head. I thought I saw him take it.) When some of them retreated, and the flock moved further away, I released the horse.

Whenever we are called in for interrogation, we are almost automatically given at 15 day order banning us from the area where an alleged incident occurred. (We discovered today in court that the Im Tirzu activist suspected of having attacked our volunteer was ordered not to be in contact with her, but not banned from the area.) It often seems like a convenient method to get us out of the way. Just last week, when my partner Guy Hirschfeld had a restraining order and I was abroad, the settlers had a field day. This case was even more outrageous, because I had fulfilled my obligation as a Jew and Israeli citizen to prevent a crime.

I made it clear that, given the fact that nothing other than our presence has prevented harassment, and given that nothing has come of the many solutions we have suggested to the army and police, I could not sign my agreement to conditions that would leave fellow human beings unprotected. My lawyer suggested that I and the youth have a mutual order requiring us to always have at least 20 meters between us. I said that the police were welcome to convince me that they would now do something they hadn’t until now. I would agree to waiting outside the area, and only rushing in if necessary…..

Lawyers and other friends, and even the police tried to persuade me to sign, and then appeal. Officers kept saying, “So, you want to spend a night in jail? Do you know who you will be with? You are making a mistake.”

“Of course I don’t want to spend a night in jail,” I replied. “The problem is that it can be close to 15 days before an appeal is heard. I therefore prefer to spend the night in jail, so that the issue will be brought before a judge tomorrow. My guiding principle is that I cannot leave people unprotected.”

An EKG during intake to the “Russian Compound” jail indicated that I was in danger of a heart attack. I was in the hospital emergency room until almost 5:00 am (much better than the infested mattresses of the Russian Compound, and the need to be on my guard against attacks from right wing inmates.) Thank God, I seem to be just fine.

Surrounded by my friends, I was grateful and relieved when the judge ruled that the police demands were unreasonable. As my lawyer had suggested yesterday, it was agreed that the rider and I would not come within 20 meters of each other, and that I would stay at least 100 meters away from the outpost.

I was released in time to attend a solidarity visit to the Sumarin family, whom the KKL/JNF want to evict from their home in East Jerusalem. This week, the head of the Reform Movement’s faction on the KKL/JNF board will move to evict the family, even before the family’s appeal is heard, if the family does not pay various payments and deposits the family doesn’t have. I received a round of applause when I arrived, but made it clear that it isn’t about us. There are times when our welfare is secondary to that of the families and the shepherds we are trying to protect. 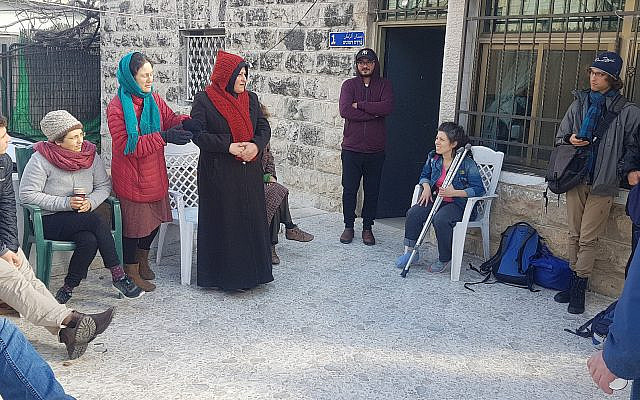 On this Shabbat, may we all internalize what Yehudah learned long ago.