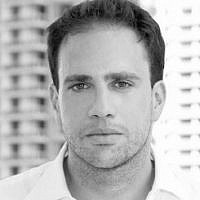 The Blogs
Daniel Pomerantz
Apply for a Blog
Please note that the posts on The Blogs are contributed by third parties. The opinions, facts and any media content in them are presented solely by the authors, and neither The Times of Israel nor its partners assume any responsibility for them. Please contact us in case of abuse. In case of abuse,
Report this post.

Last fall at the Playboy Mansion in Los Angeles, California, Hugh Hefner, the Playmates and the staff were, davka! speaking Hebrew. I had brought my team to Playboy’s offices for training and during lunch at the Mansion we all took a moment to talk about ourselves. As a new oleh (immigrant) in Israel I still get excited about Hebrew words, and so I shared the word shfan-fana, which means Playboy Bunny. As far as I know, Hebrew is the only language in the world that has such a word, and everyone at Playboy was excited to learn it, and to repeat it over and over. Just a few years earlier I could not have imagined such an unusual situation.

I used to see Israel as an abstraction: home to cousins I’d never met, ancient artifacts, and that impossible language from my bar mitzvah. Yet from the first moment I arrived in Israel as an adult, I felt that I was at home. I don’t mean in a Leon Uris, dramatic Hollywood, lifelong dream kind of way: I mean that I just felt totally natural, as if I’d always been here. I didn’t know the language, I couldn’t find my way around (sometimes I still can’t!) but every time someone tried to make a shidduch for me (fix me up), invited me for Shabbat, or yelled in a public place, it all just felt familiar, and it felt “right.”

So I came back to visit: again and again and again. One day a friend in Israel asked me, “Don’t you ever feel homesick for Chicago?” I thought about her question and then answered honestly, “No I don’t, but sometimes when I’m in Chicago I feel homesick for Israel.” I understood in that moment that I had to make aliya, and three months later I moved to Israel.

During the many visits to Israel, I was working as a lawyer in Chicago. Many of my clients were entertainment and media entrepreneurs, and I was the head of the Chicago Bar Association’s “Creative Arts Committee.” At the time Playboy’s headquarters were in Chicago, so I came to know their lawyers and I even attended the annual shareholder meetings.

The Playboy company held a certain magic for me because of its contradictions: serious yet glamorous; a world of beautiful icons but also hard-working professionals; a logo so famous that it is recognized all over the planet, and yet hundreds of anonymous people work behind the scenes every day to make this phenomenon possible. I learned about Playboy’s history and it surprised me: interviews with heavyweights like Dr. Martin Luther King, Jimmy Carter and even Yasser Arafat; the fiction section where an unknown Ray Bradbury got his first big break alongside authors like Isaac Bashevis Singer. Here in Israel we are continuing this tradition of heavyweight quality: including our deep and personal interview with Avi Dichter, currently Israel’s Minister of Internal Security, and former head of the Shabak, as well as our feature story on the day that Steve Jobs met Andy Warhol (and showed him the world’s first Macintosh computer).

Of course I already knew that Playboy featured beautiful women, but I hadn’t fully appreciated the caliber: the first issue in 1953 featured Marilyn Monroe, and since then women like Cindy Crawford, Claudia Schiffer and Madonna have posed, while artists like Salvador Dali and photographers like Mario Sorrenti have directed photo shoots. In our first issue we feature Israeli celebrity fashion model Natalie Dadon on our cover, and Israeli dancer Marin Teremets in our Playmate centerfold.

Given my familiarity with Playboy, I naturally kept an eye out when I visited Israel: Is there an Israeli edition? What’s it like? To my surprise I saw a variety of Playboy products but no magazine. So I spoke to my friends and colleagues in Chicago, and they put me in touch with Playboy’s international group. At first this was idle curiosity, but conversations became meetings, meetings led to research and plans, and one day Playboy’s international group asked me a life-changing question: would I like to bring Playboy Magazine to Israel?

I’ve seen a lot of surprising things in my first year of Aliya: Yom Kippur when the streets empty and children ride their bikes, and Yom HaZikaron when thousands of people stand and cry together because everyone has lost someone. I’ve voted, and seen the shape of our government change before our eyes, I’ve heard sirens and learned how it feels to run to a bomb shelter, I’ve walked through Yafo on peaceful evenings during the Muslim call to prayer, and joined in protests for social justice. I attended ulpan Hebrew classes with new Israelis from all over the world, and even volunteered in the IDF (Israel Defense Forces), where I lived and worked on a base, side by side with our soldiers. Yet I’ve also seen Israel’s fashionable side: Tel Aviv Fashion Week, the Gay Pride parades, concerts, theaters, and coffee houses. And of course, I’ve visited the Playboy Headquarters as a representative of my country.

Through these experiences, I’ve come to understand that Israel is a land of contradictions: of tradition and modernity; of pragmatism and style; a refuge from dangers of the past and present, but also a real home for our future. When I look at Playboy I see irresistible contradictions as well: a focal point for beauty and style yet also a forum for argument and serious thought; a story of tradition, but also of freedom and change. I believe that a magazine as complex and beautiful as Playboy is the perfect fit for a country as complex and beautiful as Israel, and I now work every day with a staff of talented, passionate professionals who feel the same. In the words of Ernest Hemmingway (another one of Playboy’s many famous authors), “The shortest answer is to do the thing.” My entire team and I are all very proud to say that after 60 years of success in 30 countries, Playboy has finally made aliya.

About the Author
Daniel Pomerantz is the Senior Editor for the media watchdog HonestReporting and teaches Legal & Financial Aspects for Entrepreneurs at the Interdisciplinary Center (IDC) in Herzliya. He is also a frequent guest on i24 News as a media/political analyst. Daniel previously served as CEO of Playboy Israel as well as a business attorney in the US.
Comments