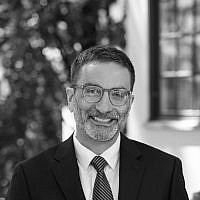 The Blogs
Gil Steinlauf
Apply for a Blog
Advertisement
Please note that the posts on The Blogs are contributed by third parties. The opinions, facts and any media content in them are presented solely by the authors, and neither The Times of Israel nor its partners assume any responsibility for them. Please contact us in case of abuse. In case of abuse,
Report this post.

For decades, I had heard about the magic of Friday nights at the Center for Jewish Life/Hillel (CJL) at my alma mater, Princeton University: the packed house, the controlled but glorious chaos, students intersecting from all walks of Jewish life to celebrate Shabbat.

This past fall, I returned to Princeton as CJL’s Executive Director after 25 years as a pulpit rabbi and was finally able to experience it firsthand.

During “Welcome Back Shabbat,” I joined the outdoor, guitar-infused Reform service; reveled in dancing and full-throated singing in the Orthodox service; and felt the building literally shake from the heartfelt and robust Conservative minyan. And this all happened before we ate Shabbat dinner.

It actually brought me to tears of joy. This was a real vision of the Jewish future. And I saw that in my new role, I’m not just the Executive Director. I’m not just a rabbi. I’m also, and maybe most importantly, the “Kveller in Chief,” celebrating and cheering for our brilliant and dedicated students.

It’s not a great surprise that the rest of the semester wasn’t always perfectly magical: there were surprises, tragedies, and challenges that came up along the way.

Nevertheless, I can say, with much satisfaction, that nothing has diminished my kvelling.

When I took on this new role in August, I arrived in a Jewish community that was still recovering from a divisive and unsuccessful student referendum last spring rooted in the anti-Israel Boycott, Divestment and Sanctions (BDS) movement. If I was hoping during “Welcome Back Shabbat” that campus had moved beyond such battles, I quickly learned I was wrong.

Over the past three months, we have responded to a seemingly never-ending string of challenges: the tragic death of a Princeton student who was a close friend to some CJL students; an FBI alert about credible threats to New Jersey synagogues; a campuswide email from a pro-Palestinian student group urging the boycott of an educational program in Israel and challenging Israel’s legitimacy as a Jewish democratic state.

And, true to our longstanding Jewish ways, there were sharp disagreements and divisions among our own students about whether to support a referendum encouraging the university to adopt the International Holocaust Remembrance Alliance (IHRA) definition of antisemitism.

I felt these profound challenges professionally as an ambassador for Princeton’s Hillel, which fosters Jewish connections, learning, and ties to Israel. I also felt them personally as I transitioned from the pulpit to serving passionate Gen-Z’ers who bring their own generational perspectives to Jewish questions.

For instance, after spending my adult life as a rabbi in a progressive branch of Judaism, advocating vociferously for many progressive causes, it was a surprise and an important learning experience when some Jewish students saw my responses to our crises as spreading “an exclusionary, right-wing message.” In my 25 years in the pulpit, I have been called many things. But no one — not my progressive congregants, and definitely not my conservative ones — had ever suggested I was right-wing.  As many pointed out to me – welcome to the wonderful world of campus politics!

And, yet, despite these challenges and learning experiences, I still kvell.

I kvell because I see remarkable student leaders — both Jewish and non-Jewish — committed to a campus that is safe for all of us. Last month, the Undergraduate Student Government passed a resolution condemning antisemitism and calling for greater education on campus, including workshops that we run at CJL using the IHRA definition.

I kvell because the students who publicly disagreed on a Wednesday with me and with Hillel’s statements about Israel spoke openly and honestly with me on Thursday, and then came to Shabbat dinner on Friday. Instead of disengaging, they kept our difficult discussion going within our family as I continued to reinforce my deep love of Israel.

And I kvell because I lead an institution where students embrace these smart and deep conversations, explore issues, and challenge one another and themselves. We are a “safe enough space” where students express their own views — and are also comfortable engaging with those who have different ideas.

As I prepare for my second semester back at Princeton (with the full knowledge that it won’t always be magical) I am committed to our community celebrating Jewish life even as the arrows of antisemitism and attacks on Zionism are flung at us.

Israelis themselves are great teachers for this. They celebrate Jewish life while surrounded by enemies. Unfortunately, the American Jewish community is now in the same place, and we must continue to feel the magic and to kvell throughout.

If I learned during “Welcome Back Shabbat” that our work is beautiful, I learned during the next three months that part of that beauty means it is also beautifully complex. Our work is occasionally messy. It is frequently inspiring. And it reflects the diverse identities and approaches we embrace “in the service of Humanity,” as Princeton’s motto says.

About the Author
Rabbi Gil Steinlauf is Executive Director of the Center for Jewish Life/Hillel at Princeton, where he is also an alum. Prior to returning to Princeton in 2022, he served as Rabbi at Adas Israel in Washington, DC, and then Congregation Kol Shalom in Rockville, MD. Rabbi Gil founded the Jewish Teen Leadership Institute and the Hineni Fellowship for LGBTQ Jewish Leadership to nurture new LGBTQ leaders in the Jewish world.
Related Topics
Related Posts
Gil Steinlauf