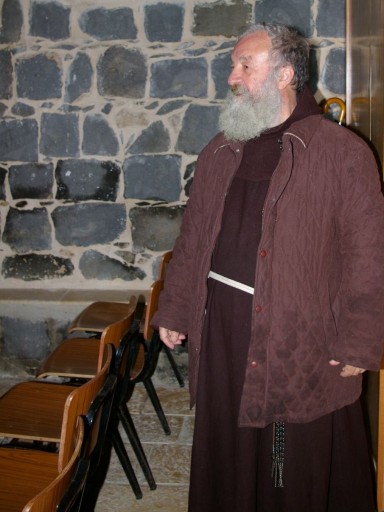 A caretaker at the Church of the Primacy of St. Peter in Tabgha, Israel. (Photo: Dexter Van Zile)

Since the mid-1960s, the Roman Catholic Church has worked assiduously to suppress hostility toward Judaism and the Jewish people. In 1965, the Church’s Second Vatican Council issued Nostra Aetate, (Latin for “In Our Time”), which stated that the Jews will no longer be held collectively responsible for the death of Jesus. This document marked a sea change in how the Church would relate to the Jewish people. It would no longer portray or regard the Jews as a deicidal people who obstruct God’s purposes for humanity. The document called for “understanding and mutual esteem” and “fraternal dialogue” between Christians and Jews.

In the decades since, Catholic leaders have followed up on the promise of Nostra Aetate with a number statements offered in an effort to achieve this “understanding and mutual esteem.” For example, in 2000, Pope John Paul II visited Israel and stated that Jews and Christians “must work together to build a future in which there will be no more anti-Jewish feeling among Christians, or any anti-Christian feeling among Jews. We have many things in common. We can do much for the sake of peace and for a more human and more fraternal world.”

In 2001, Cardinal Ratzinger, who later became Pope Benedict exhibited a powerful graciousness when he stated in a text titled “The Jewish People and Their Sacred Scriptures in the Christian Bible,” that “Jewish messianic expectation is not in vain.” The document also admonished Catholics to steer clear of anti-Jewish interpretations of passages in Old and New Testaments.

Sadly, not every institution or individual that comprises the Catholic Church has gotten the message that it is no longer acceptable to engage in (or broadcast) anti-Jewish polemics or to use scriptures to harass the Jewish people.

In particular, a U.S. affiliate of the Equestrian Order of the Holy Sepulchre, a Catholic charity with local chapters (or “lieutenancies”) located throughout the world, is promoting anti-Israel propaganda – some of it with theological overtones – through its website. Such anti-Israel messaging broadcast by one affiliate mars the reputation of the entire organization, which provides substantial funding to Catholic schools and churches in the Holy Land.

The affiliate in question is the order’s North Central Lieutenancy – which serves Kentucky, Illinois, Indiana, Michigan, Ohio, and Wisconsin.

One obvious sign that something is amiss at the North Central Lieutenancy’s website is that it endorses and provides a link to the Kairos Document a text, issued in December 2009 by a group of anti-Israel activists in the Palestinian Christian community.

The document, which de-legitimizes Israel as a Jewish state while soft-pedaling the misdeeds of the Palestinians, has been described as “supersessionist and antisemitic” by the Central Conference of American Rabbis (CCAR), with good reason.

One salient problem with the text is that it fails to address a historical reality that Israeli decision makers must contend with – that Israeli withdrawals and peace offers have been met with violence and rejectionism – for decades.

Instead of addressing this reality the document blames Palestinian violence solely on Israeli policies, asserting that “If there were no occupation, there would be no resistance, no fear and insecurity.” The notion that Israel’s presence in the West Bank is the source of insecurity ignores a troubling reality – that things have gotten much worse in the Gaza Strip after Israel pulled out of the Gaza Strip during the summer of 2005.

More to the point, the document’s distorted historical narrative is coupled with a hostile theology that no responsible Catholic institution can credibly endorse.

For example, the Kairos Document states that the “Israeli occupation of Palestinian land is a sin against God and humanity because it deprives the Palestinians of their basic human rights, bestowed by God.”

This is an irresponsible phrase to describe suicide bombings and rocket attacks against Israeli civilians launched by Hamas. Hamas fails to recognize Israel’s right to exist as a Jewish state, but instead seeks to oppress Jews by destroying their sovereign state and replacing it with an Islamic state where Jews would be a beleaguered minority.

By offering up theological condemnation for Jewish self-defense and remaining silent about Hamas’s evil agenda, the Kairos Document is engaging in ugly anti-Jewish rhetoric.

The document’s enmity toward Israel is also manifested in how it highlights Palestinian suffering, while ignoring Israeli suffering caused by the conflict.

In its condemnation of the document, the CCAR stated that the Kairos Document “Paints a compelling picture of the reality of Palestinians living under Israeli rule, but ignores the reality of Israelis forced to flee for their lives into bomb shelters, or in fear of being blown up while eating in a restaurant, celebrating a Passover Seder or dancing at a Bar Mitzvah Celebration.”

Clearly, the Kairos Document does not qualify as a “peacemaking” document, nor does it fulfill Nostra Aetate’s call to promote “fraternal dialogue” between Christians and Jews.

So, why is the North Central Lieutenancy of the Equestrian Order of the Holy Sepulchre of Jerusalem, a Catholic institution, endorsing the Kairos Document in light of the Church’s repeated condemnations of anti-Judaism?