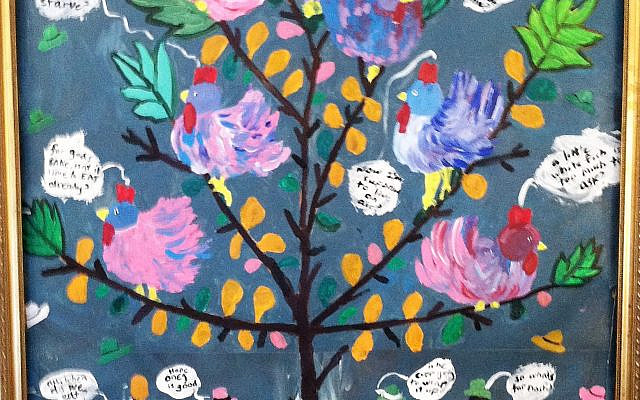 When I was studying to be a 40-something bat mitzvah girl, my beloved rabbi, Stan Zamek, advised me to read To Pray as a Jew by Rabbi Hayim Haley Donin, which I promptly did. I also read To Be a Jew by the same author, two or three Jewish histories, The Story of Hebrew, Great Jewish Ideas, Man’s Search for Meaning, The JPS Guide to Jewish Traditions, and the entire Torah—start to finish in English. Because my Hebrew, at that time, consisted of one word: shalom.

For the love of lox, how desperately I wanted to learn to pray.

Well, I did learn how to pray, if knowing the words of the prayers along with some understanding of what they actually means constitutes prayer. But something was missing. Something didn’t stick, and this despite the copious reading I’d done on the subject of my people well before I mastered prayer book Hebrew well enough to become a bat mitzvah. I read so much that sometimes I feel like my bones were made of books, my blood of words. And who can blame me? We Jews have written and continue to write so much Jewish literature, starting with the original family saga, and on every subject and every genre, that there’s literally no end to it. You know what I just read? You guessed it. The Autobiography of Solomon Maimon.

Maimon was a contemporary of Moses Mendelsohn, and like him, a Talmud whiz. But unlike the slightly older Mendelsohn, Maimon came to believe that rabbinic disputation, including the pilpul in which he’d been educated and most of Talmud, was dumb. Both men left the Polish shtetl behind for the intellectual freedoms of enlightenment Berlin, but unlike Mendelsohn, who remained firmly rooted in his faith and practice, Maimon, unmoored, fell apart. A backwoods Jew in the big city who could get by in three or four languages and taught himself German out of a book, he argued for a radical rationalism that outstripped Kant and wrote a ten important books of philosophy. Somewhere along the way, though, he got lost, and never, apparently, found his way home.

In the diaspora, home for Jews has been the synagogue: the center of Jewish life and often the biggest and most luxurious building in the community. Prayer and study is what defined us, is what made us who we are in all our various manifestations and guises, flavors, languages, and speeds.

But for the first half of my life, the synagogue was not a place I wanted to step into. For one thing, I grew up utterly Jewishly illiterate. This was largely a byproduct of my father’s decision to move his Jewish family to what was then semi-rural and very non-Jewish Virginia, a place largely devoid of Jews and, at the time, without a single synagogue of its own. I did however have a Jewish role model: the same father who set his family down in the non-Judaic and heavily wooded outback faithfully went to Orthodox shul (in Washington) every Shabbat. And how the man loved to pray. (He’s in his nineties now, and still loves nothing better than going to this same Orthodox shul.) Even as a child, I wanted to have what he had: that fierce determination, that fierce will to stand, among other Jews, talking to God in Hebrew.

Skip a generation and my sons, like their maternal grandfather, love to daven. They daven the way I dance: with pure joy, and with seemingly endless reserves of attention and energy. (Okay, I don’t dance like that anymore, but up until I had a hip replacement, I was pretty wild.) The Nishmat Kol Hai? Bring it on! The Amida? Yippee!

Whereas when I’m on my feet, supplicating God to pardon our sins and transgressions and asking to be drawn near to His presence, I’m more likely to be having some kind of out-of-body experience, wherein my physical body, dressed conservatively and shod in flats, is next to my husband’s a few rows back from the bimah, and the rest of me is looking at shoes.

Either that, or I’m in the synagogue, but thinking: boy she’s gained weight, I wonder if she’s pregnant? I really need to lose some weight this summer, only who am I kidding, I’ll never give up red wine and dark chocolate…and for the love of liberty, do we really have to do this entire endless prayer twice? Is there at least going to be some decent nosh afterwards?

I’ve talked to both my sons, my husband, various rabbis, and basically anyone who will listen to me about my seeming inability to approach prayer with sufficient kavanah, and have been offered all kinds of insights, advice, and suggestions. But I think the thing that helped me most was when a friend of mine pointed out that I talk to God all the time, often out loud, write letters to Him, and, in my own way, try to listen to what He has to say. “Maybe,” she said. “That’s enough.”