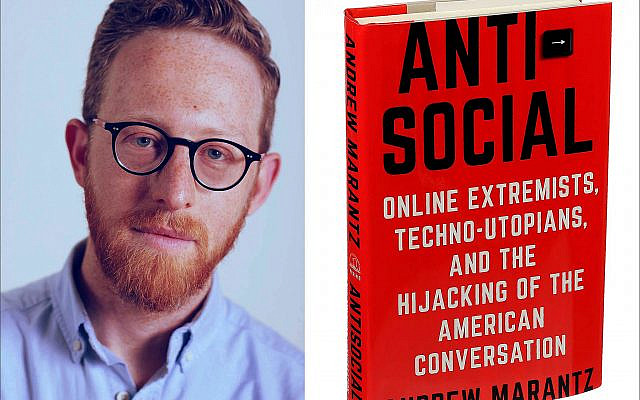 Andrew Marantz is author of the new book, "Anti-Social: Online Extremists, Techno-Utopians, and the Hijacking of the American Conversation."

Six weeks after right-wing bigots, white supremacists and others violently stormed the US Capitol — and mere hours after the death of radio talk-show provocateur and conspiracy theorist Rush Limbaugh — two experts appeared via Zoom to discuss the proliferation of online hate.

The Feb. 17 webinar showcased the findings of Andrew Marantz, a veteran staff writer at the New Yorker specializing in social media, technology and the extreme right, and Deborah Lauter, executive director of the NYC Office for the Prevention of Hate Crimes.

Marantz is the author of “Antisocial: Online Extremists, Techno-Utopians, and the Hijacking of the American Conversation.” He and Lauter spoke with Tel Aviv-based moderator Harry Wall of The Olga Lengyel Institute for Holocaust Studies and Human Rights, which hosted the event.

“The attack on the nation’s capital by violent extremists may have been the most notorious hate-inspired event, but it’s certainly not the only one in recent years,” said Wall, recalling the 2016 murder of 49 young people at the Pulse nightclub in Orlando; the violent 2017 white supremacist rally in Charlottesville, and the 2018 killing of 11 Jews in a Pittsburgh synagogue by a neo-Nazi fanatic. “All are part of a very disturbing trend.”

In fact, the Jan. 6 insurrection — largely inspired by Donald Trump and his supporters — should come as no surprise to any serious student of American history, argues Marantz.

“What we can say is that bigotry was not invented in the Internet Age. Mysogyny, racism and anti-Semitism all predate the founding of this country,” he said.

What’s different today is the scope and speed at which such ideas are spread.

“The prevailing metaphor today is the virus, how ideas go viral. That’s originally what motivated me to explore this stuff,” Marantz explained. “It was around 2014-15 when I started looking around. And seeing in a basic obvious sense, if the Internet has changed everything about the way we think, live, behave, communicate, shop and feel, there’s no reason logically to think it won’t affect our belief system, our ideology or our politics.”

That led Marantz to plunge into the netherworld of extremist chat rooms and so-called “gate crashers.” It was all part of the research for his 400-page book, which was published last September by Penguin Random House to rave reviews by the New York Times and others. 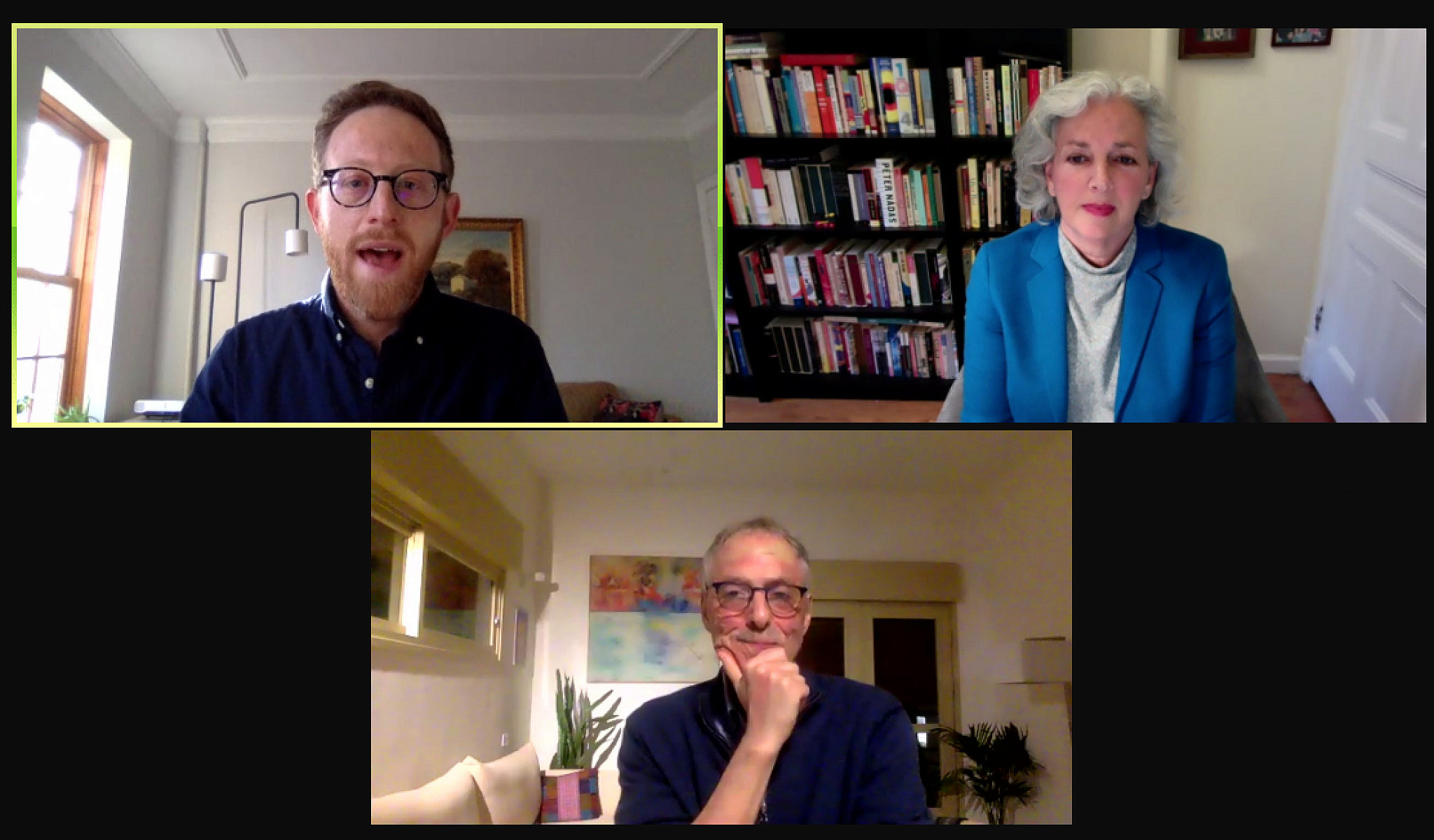 “This wasn’t a book about Donald Trump, but a book about the many structural forces that enabled something unthinkable to become thinkable,” he said. “The reason has a lot to do with the history of American racism and mysogyny, the decline of the white working class, and the rise of social media and the collapse of traditional media that has led us to this point.”

Stamping out hate crime in the Big Apple

“Crime had been going down, but hate crimes were up, mostly driven by anti-Semitism,” said Lauter, who oversees a staff of seven and operates on a $2 million annual budget.

“We are tasked with preventing hate. There’s not only one way to do it, but over these past months, I’ve been coordinating all the different city agencies that would be stakeholders in hate prevention and response: the New York Police Department, of course, but also the fire department, the commission on human rights, the taxi commission, parks, and the Department of Health and Mental Hygiene — in all, 18 agencies plus all five district attorneys’ offices,” Lauter said. “I’m hoping we can provide a role model for other governments that want to take this seriously and do something about it.”

Simply put, hate crimes are those committed against individuals because of their personal characteristics such as religion, gender, sexual identity or physical disabilities.

“In most cases, hate crime laws don’t operate independently. They are penalty enhancement statutes, so for a hate crime to happen, there has to be an underlying crime,” Lauter said — yet for every such incident reported to police, another one goes unreported.

“Some people in the Asian community culturally don’t feel comfortable with law enforcement,” she said, adding that gay, lesbian, bisexual and transgender victims of hate crimes often refrain from crimes because they don’t want their sexual preferences known, and Hispanic immigrants frequently fear deportation — even though that fear is unfounded, at least in New York. 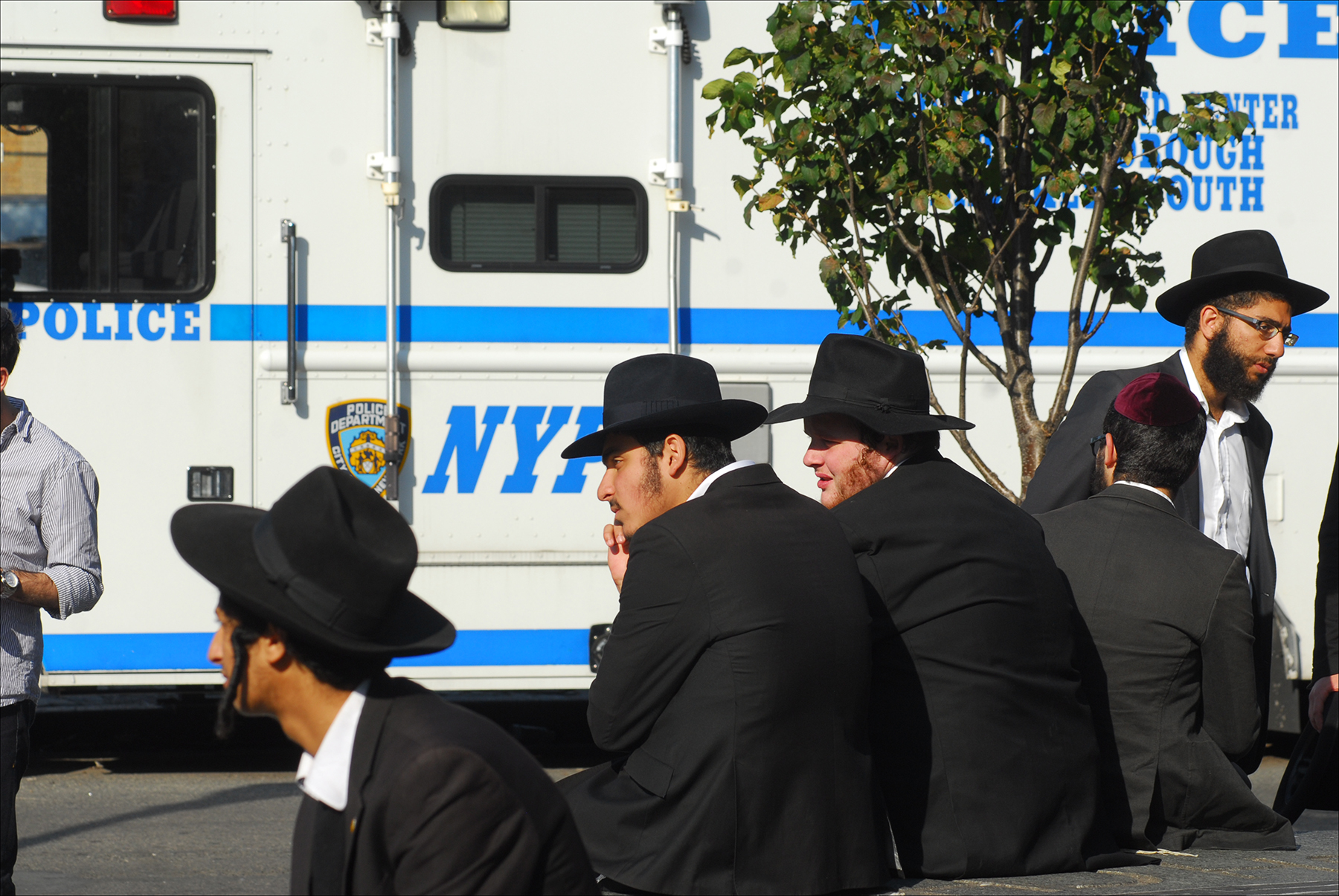 According to Lauter, more than 400 hate crimes were reported in New York during 2019. Of the total, 58% were directed against Jews — mainly vandalism and swastika-painting incidents — with another 14% against the LGBTQ community.

Then last year, the pandemic hit and numbers plummeted drastically, with hate crime in the city dropping by 37%. Yet anti-Semitic incidents still dominated, accounting for 43% of all NYC incidents in 2020 — followed by those targeting LGBTQ people (16%) and blacks (14%).

At the same time, hate crimes against Asians jumped from only one in 2019 to 30 last year — likely a consequence of COVID-19 itself, which originated in China.

Lauter is well-prepared for the job. A California native, she received her law degree from Yeshiva University’s Cardozo School of Law, then returned to San Francisco to run a pro-Israel political action committee. In 2006, she became director of the civil rights unit of the Anti-Defamation League after a stint for the ADL in Atlanta, where she was once the victimof a hate crime herself.

According to the online Mishpacha Jewish Family Weekly, one day Lauter came home to find pork and shellfish products stuffed into her mailbox. The activist, who keeps kosher, had been targeted by a local white supremacist group.

“Nobody’s born hating,” she mused. “Hate is learned; it can be unlearned. The challenge for us now is with those who showed up at the Capitol or the ones joining QAnon. These are not uneducated people. What was it they didn’t learn or didn’t embrace? We’ve always talked about empathy, getting kids to respect themselves. Now I think we need to give a lot more attention to analytic skills for figuring out what is true and what’s not, giving them the skills when looking at the Internet to understand and parse it.”

But getting extremists to change their minds, it turns out, isn’t that simple.

According to a recent poll by the right-leaning American Enterprise Institute, four out of 10 non-evangelical Republicans surveyed said they agreed with the conspiracy theories being spread by QAnon—and 72% of evangelical Christian Republicans say Joe Biden did not legitimately win the presidential election. Perhaps more frightening is the finding that 29% of evangelical Christian Republicans really do believe the claim that Trump was “secretly fighting a group of child sex traffickers that include prominent Democrats and Hollywood elites.” 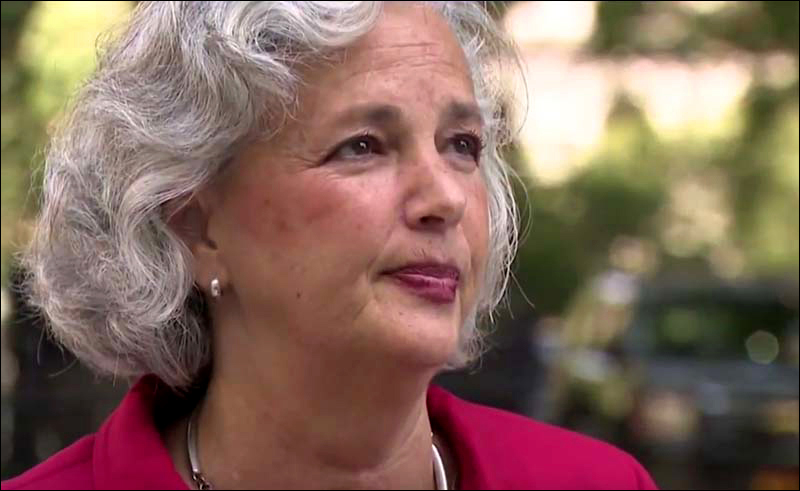 “We can’t just rebut their theories in a bullet-point way and think it’ll go away,” Marantz said of QAnon. “We’re not going to fact-check our way out of a problem like QAnon. This is a very post-logical phenomenon.”

He added: “This is not a problem of ignorance, in that once you expose someone to the truth, they’re converted. On the other hand, there are specific talking points that can get people further and further down what is called the ‘libertarian to alt-right pipeline.’ These people are well-practiced recruiters.”

Indeed, Marantz said that while he was embedded in extremist circles, he’d watch online as fearmongers sitting at their kitchen tables would set up a video chat in Periscope to knowingly spread an unfounded rumor about Islamic terrorism.

The aim, he said, was to “plant the seed” and use social-media algorithms to get their hateful memes trending on Twitter, with the hope that right-wing commentators like Rush Limbaugh and Sean Hannity would mention it, and then it would get picked up by Fox News and ultimately CNN and other mainstream media — all without the perpetrators having committed a single act of violence or breaking any laws.

And it’s not only uneducated, ignorant, rural Americans buying into this trash—far from it.

“Everyone I embedded with for the book is not someone you’d expect. It’s never the proverbial 15-year-old in his basement wearing a hoodie. Many of the people I was with in this movement were LGBT. Many were Jewish, or women, or people of color. All the ones I focused on were not ignorant and not stupid. It’s a very nice, comforting fiction we tell ourselves that everyone’s been taken in by this fog of ignorance, and we can just wait for this fog to lift. But that’s just a fantasy.”

Marantz cited the case of a young man he befriended online who had grown up in the leafy New Jersey suburbs of Maplewood and Montclair. The product of progressive, multi-ethnic schools, he was active in the Unitarian Church and his father was a professor. But then that young man went through an ideological conversion — egged on by podcasts and blogs — and came out a neo-Nazi who just happened to be in Charlottesville that fateful day and even introduced David Duke, a former grand wizard of the Ku Klux Klan. 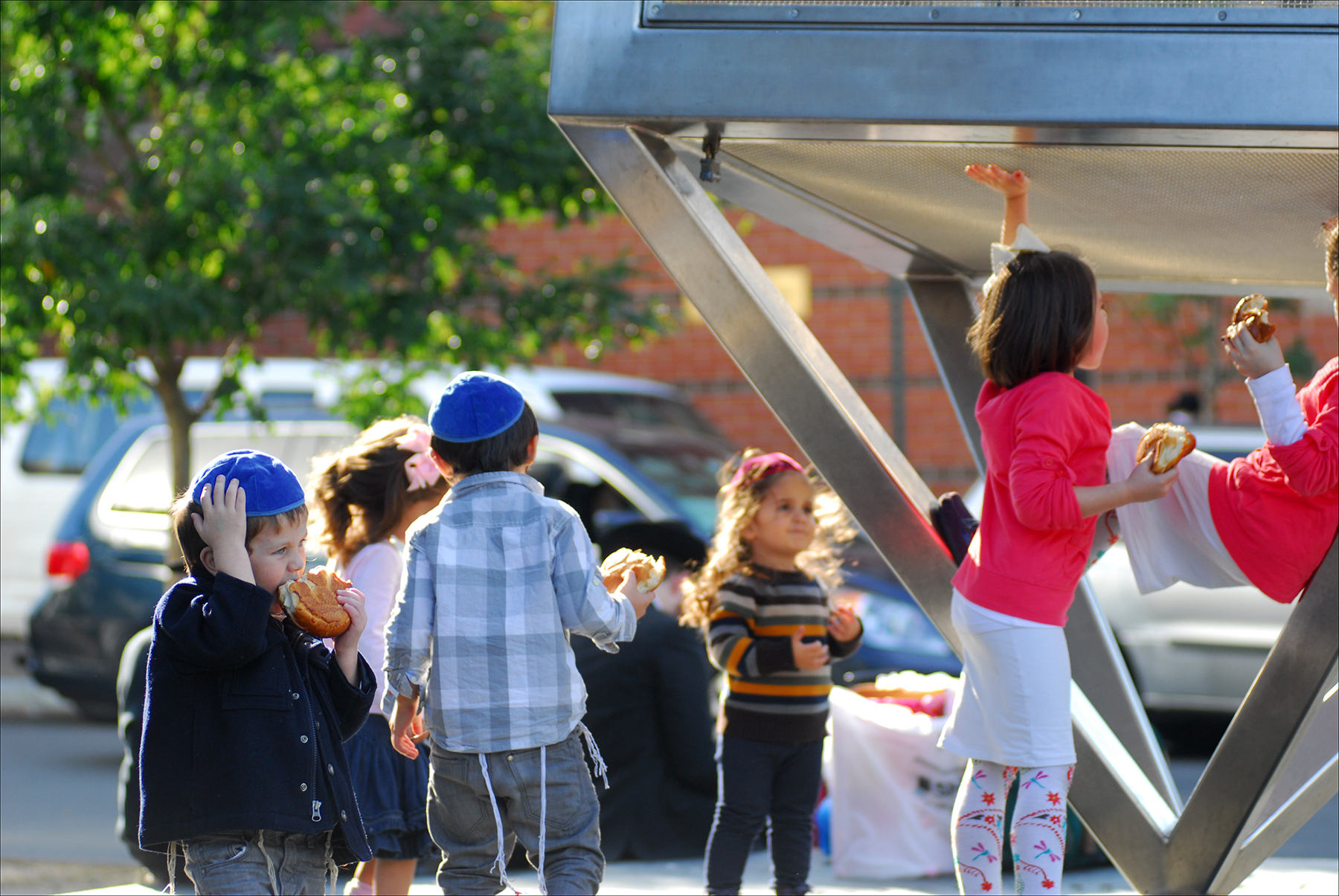 And while federal regulation of big media companies to filter out online hate is a step in the right direction, it’s not sufficient, he warned — even though Facebook has moved to ban Holocaust denial on all its platforms and Donald Trump has been permanently kicked off Twitter.

“There’s an obvious case to be made for breaking up Amazon or Facebook, but that wouldn’t solve the problems we’re talking about,” said Marantz. “The core problem you’re still left with is these algorithms whose lifeblood is emotional engagement.”

Indeed, he said, “having these algorithms built around emotional engagement and then say we’ve now shut down these 500 Holocaust denier pages is like drawing a mob to the Capitol and then rewarding the people who are keeping them out of the Capitol. Facebook is creating the fires it’s then tasking contract workers to put out.”

While law enforcement and government regulation might help, such solutions can only go so far. Lauter says one strategy that might prove successful in the long run is focusing on education and community relations.

During the city’s rash of attacks against Orthodox Jews in late 2019, said Lauter, her office arranged for a Hasidic rabbi to speak to students in a largely Hispanic public school in Brooklyn.

“The kids were just fascinated,” she recalled. “‘They asked the rabbi questions like ‘Why do you wear those funny black coats and big hats?’ and ‘Why does your hair come down in front of your ears?’ Just to have the rabbi simply explain his religion and customs was a huge step.”