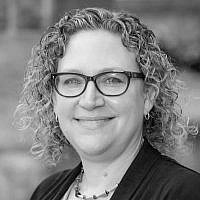 The Blogs
Eve Rudin Kleinman
Apply for a Blog
Advertisement
Please note that the posts on The Blogs are contributed by third parties. The opinions, facts and any media content in them are presented solely by the authors, and neither The Times of Israel nor its partners assume any responsibility for them. Please contact us in case of abuse. In case of abuse,
Report this post. 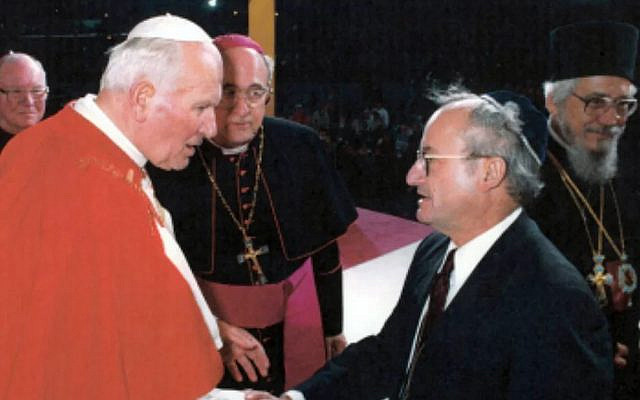 Those who have grown up with parents who travel for business knew that their parents were meeting with clients, overseeing businesses and perhaps giving presentations. My dad traveled for business as well. But it was to the Vatican, Camp David, and churches and mosques around the world.

Those growing up as “clergy kids” will agree that it is a different type of childhood. But instead of discussing congregants, synagogue politics and life-cycle events, my sister and I grew up learning about the Oberammergau Passion Play, current and historic Black-Jewish relations, and Nostra Aetate, the Second Vatican Council document adopted in 1965 by the world’s Catholic bishops that has transformed Catholic-Jewish relations.

In a few days, my dad, will receive the highest honor granted by the Vatican to non-Catholics; Pope Francis selected him to become a Knight of St. Gregory the Great. He’ll be the third American rabbi to receive such an honor.

When he first shared that he was to be be knighted by the Pope, I jested: “They DO know that you are Jewish, right?”

“Some of my dad’s best friends” are Christian leaders, thinkers, cardinals, and bishops. When hospitalized for nearly a month in my mid-twenties, my dad traveled for a week to Rome to  attend  a Vatican concert commemorating the Holocaust. When he returned, I was told that  Pope John Paul II prayed for my recovery. Great, I thought. Everything helps. The doctors and nurses, by the way, were impressed. Apparently, it’s not every day that a patient receives a blessing from the Pope.

For more than half a century, I have been honored and blessed to have a front row seat for my father’s long-term career as the now retired Director of Interreligious Affairs for the American Jewish Committee. I watched and learned from this articulate leader, thinker, well-versed in religious texts and theology, and prolific writer.

His efforts have brought about substantive policy and theological changes in the Catholic Church and many Christian denominations which were unthinkable 60 years ago. Countless local towns and cities around the world have benefited from these long overdue efforts and today the culture of interreligious dialogue and partnership is now a cornerstone of many communities.

My own local congregation, Larchmont Temple, has a strong partnership with a local African-American church and its pastor is one of our senior rabbi’s dearest friends, as well as appearing on weekly on a local TV cable show with a local Presbyterian minister.

Those who have worked with and know my father, the elder Rabbi Rudin, know how deeply committed he is to bringing people together and teaching non-Jews about Judaism. I cannot imagine his lifelong work taking place without he belief in the power of relationships – personal relationships – being at the center.  For decades my father met and schmoozed (talked) with leaders of religious communities around the world with one simple goal – peace and mutual understanding among religious communities.

Why did Pope John Paul II pray for my recovery? I sincerely think it’s because he and my dad were doing “the schmooze.”

Rabbi A. James Rudin will be invested as a Knight of Saint Gregory the Great on Sunday November 20, 2022 at Saint Leo University by Cardinal Seán Patrick O’Malley on behalf of Pope Francis.

About the Author
Rabbi Eve Rudin is the Director of Education, Youth and Families at Larchmont Temple in Westchester NY.