Yet, right across the world, that’s precisely the kind of Pesach we’re going to be celebrating or enduring. This festival of togetherness reduced to solitariness; this communal clustering diminished to two or three or if you’re lucky to four or five…

It’s an affront, this isolation. It defies our deepest human drive to connect, to socialise. It insults our religious imperative to join together with others in prayer and celebration. But this is it; the peculiar new-normal, the new age where Corona is King, where pandemic is Pharoah. This tiny little virus is bigger than all of us, spreading its infectious and invisible tentacles everywhere across our beleaguered planet.

And so we will clean our homes, sanitise our hands, reshape our spiralling minds and seder in a strange and straitened new order. We will open our eyes afresh to this old and wisened friend, our Haggadah, take a new look at the ancient gnarled face of the matzah. They’ve seen it before, the plagues and the suffering, the confusion and the fear. They’ve lived through this many times: “And the Lord sent a plague upon the people”. The Haggadah has been held by hands trembling with Black and bubonic pestilence; the matzah has been in the mouths of Jews sick with fear of Blood libels and pogroms, the Gestapo at the door… “A pestilence” writes Albert Camus in his novel ‘The Plague’, “isn’t a thing made to man’s measure; therefore we tell ourselves that pestilence is a mere bogey of the mind, a bad dream that will pass away… But it doesn’t always pass away.” Yes, it’s one mean, bad dream and it wont go away even if I stick a bottle of sanitiser on the doorpost to avert that mad Corona angel and implore him to pass over…

But for all this I’m not going to let any mean Koved (ie reputation) seeking agent ruin my Pesach this year. I’m, after all, a stubborn Jew, stiff-necked and stroppy. Like the egg on the Pesach plate or the hard boiled one at the meal, the more you up the temperature, the more obdurate I become! I’m going to celebrate with an extra zeal; I’m going to be an ultra-affirming Yid! I’m going to say that “Shehecheyanu” bracha (‘Thank you God for sustaining my life to live through this time’) so loud it’s going to blast across Caulfield so that Ezzy hears it and bursts into a song and dance, so that all our intended guests feel its vibe and add their voices in clear and crystal sound, so that all my fellow – Jews across this continent shout out “Amen!” I’m going to break the bonds of time and space and join with all the billions of fellow Corona slaves and cringers and declare: ‘We will beat you little tyrant, just as we defeated all those tyrannical plagues that assailed humanity in the past. We will overcome you because we’ve got something stronger than any of your pestilence: it’s the human spirit of ingenuity, courage and commonality. We global citizens are united by our shared humanity, the power of our minds, the strength of our spirit, the God-gifted souls that energise us. We will overcome…

And one day we will step out of this nightmare because our dreams are more potent than our fears, our goodness more resilient than our selfishness, our connectedness more sturdy than our greediness. And one day we will look back at your grandiosity as a mediocrity, a blip on the screen of history. Till then we’re going to use our forced imprisonment, our locked-downs and our pained confusion to become better, more gentler human beings, to hopefully realign our values and care more about mentschen than money, people than property. Maybe this will make us all think better of how we are treating our planet, become more real about the interconnectedness of our climate decisions. Maybe we’ll even rid ourselves of the tyrants of the world, the racists and the anti-semites…

But I’m dreaming too much now, even for a romantic idealist with a Messianic bent; even if Pesach is a night of endless dreams and special protection (Leil Shimurim) …

Right now I’m going to keep my head held high and focused on making this one memorable Pesach! It’s not going to pass over me in a blur. I’m going to raise 4 glasses of wine:

* One for our medical staff experts and workers doctors and nurses, cleaners and shleppers.

* One for all our wise and judicious leaders here in Australia and across the world.

* One for all of the countless families, individuals, volunteers and community workers especially our Police and Defence Forces doing their best to reach out to help and support one another. I’m going to raise this glass to all who are responding affirmatively to life’s most persistent and urgent question – What are you doing for others? (Martin Luther King)

And I’m also going to make a L’Chaim to Elijah, lift a fifth cup to the future, to the scientists working feverishly on a vaccine and a treatment… Bimhera Beyaimu – soon in our days may the redemptive spirit of Pesach flourish.

With best wishes from Caron and my family. 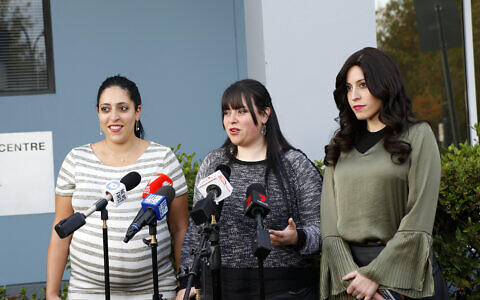 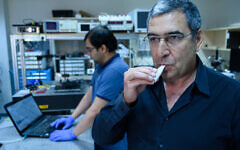 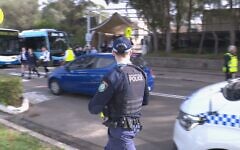 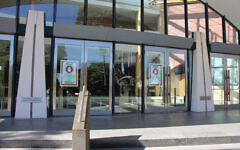 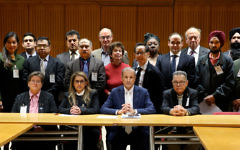 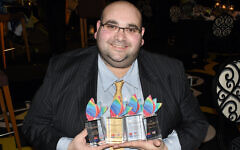 ‘We are immensely proud of our son’
AJN STAFF