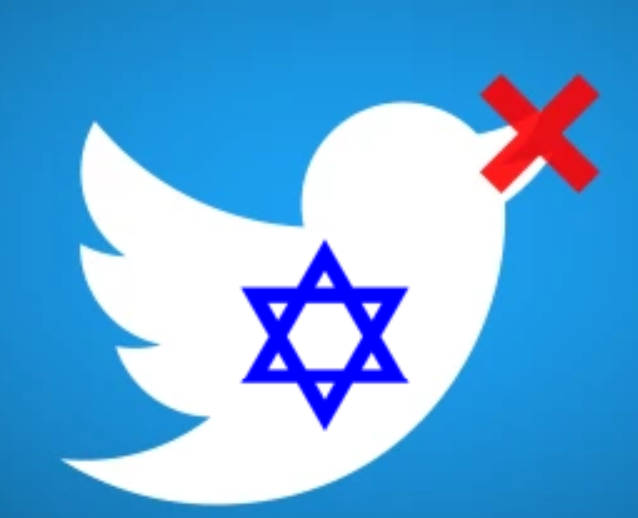 Source: Back to Jerusalem

The Star of David has been deemed “hateful imagery” by Twitter, which is locking the accounts of users who use it in their profile picture.

According to the Jerusalem Post, The Campaign Against Antisemitism has reported that several Twitter users have contacted them to report that their Twitter accounts have been locked. Twitter sent messages to the users explaining, “We have determined that this account violated the Twitter Rules. Specifically for: Violating our rules against posting hateful imagery. You may not use hateful images or symbols in your profile image or profile header. As a result, we have locked your account.”

Just changed my background to that of @Racharley77’s icon photo. She was blocked by Twitter for ‘hateful imagery’ – a cute cartoon character and a #starofdavid. I also updated my profile – added a special hashtag to define the outrage. #AmYisraelChai – #TwitterSucks!! pic.twitter.com/hbVvnDnQSe

Stephen Silverman, Director of Investigations and Enforcement at Campaign Against Antisemitism, chastised Twitter’s claim that “they lack the resources to tackle hate on their platforms, but Twitter has put the lie to that claim by demonstrating that it does have the resources, but chooses to target the benign symbol of a victimized minority instead of the countless racists who use its platform with impunity.”

Ambassador Richard Grenell has also rebuked Twitter’s anti-Semitism, and indeed this social media platform has shown a penchant for censorship and repeated attacks against faith groups especially Jews and Christians.

Last month, Twitter banned an account from the leadership at Bethel Church in Redding California for sharing Bible verses.

The leader Sean Feucht responded, “While @Facebook @instagram @Twitter promote the content of violence, rioting & destruction, they are actively CENSORING worship, prayer, peaceful protest & anything going against their fear-mongering narrative. My feed and many others is proof. #ChangeTheNarrative”

Republican Sen. Josh Hawley, former attorney general for Missouri, retweeted the Feucht’s posts blasting Big Tech over the censorship, and many Christians are now waking up to the overt anti-Semitic and anti-Christian bias of social media giants.

Tyranny of the majority

Foreign users have also criticized Twitter’s authoritarian streak in censorship. In a 2017 article entitled “Twitter has gone from a bastion of free speech to global censor”, former Spanish parliament member Alfons López Tena condemned how twitter allows any organized group to censor their opponents, by using twitter to label tweets as “sensitive” or “potentially offensive”, to delete all of them, to hide, suspend, and close the accounts they may see fit. If organized attack gains a critical mass then Twitter will obligingly censor it.

Lopez Tena pointed out that owing to the secrecy surrounding Twitter’s criteria and algorithms, gnomic vague published rules, the lack of any procedure for punished people to defend themselves, and the automated response Twitter gives of “violating the rules” without any explanation about which concrete rule has allegedly been violated, Twitter has become a paradise of bureaucratic censorship akin to Orwell’s 1984.

He further observed how any opinions an organized group or authoritarian government want to erase are labeled “hate speech” “harassment” or “abuse”, and these authors are then silenced and their thought crimes are purged from existence.

Lopez Tena cites the example of Alexandra Brodsky, an activist and research Fellow at the National Women’s Center of Yale Law School, who was harassed for being Jewish and then her account was suspended for allegedly “breaching the rules”, only to recover it after a numerous people directly lodged a complaint to Twitter’s CEO Jack Dorsey and the press highlighted the case.

Another case is Maiol Sanaüja, a prominent pro-independence opponent to Catalonia’s government with more than 130,000 followers, had his account suspended.  As such authoritarian-leaning governments have quickly learnt how to trample free speech on Twitter, with the Foreign Communications Head of Catalonia’s government boasting on Twitter of getting accounts suspended by hurling false accusations and denouncing them of “abusive behavior”.

In the face of Twitter’s rampant abuse over the years and the public’s increasing resentment, many users are moving to alternative platforms to break big tech’s monopoly in social media.  Some alternative platforms are Parler and Ding Dash, the latter of which does not save personal information.

Indeed, as Twitter continues to crackdown on free speech and display anti-Semitic and anti-Christian bias, there will likely be a corresponding migration of users to these alternative platforms.