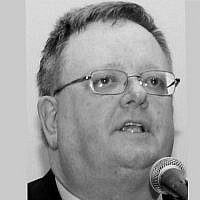 The problem with nearly all Israel advocacy is that it fails to address the false ‘occupation’ narrative that is the basis for the terrible damage to Israel’s reputation. Worse, it actually reinforces her enemies’ propaganda. 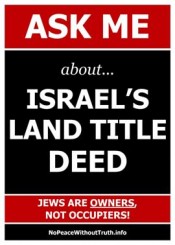 When you’re being accused of stealing someone’s land, saying you need it as a defensive buffer against terrorists, or that you saved lives in Haiti, or you are leading in technological and medical innovation (all true) is NOT a strategic argument.

First year Poly-Sci student ‘Zoey’ will never believe Jews and Israel are OK so long as she thinks they are land-stealing, ethnic cleansing monsters. In other words, Israel needs to make a moral argument that appeals to ‘Zoey,’ and that argument must destroy the ‘occupation’ lie in order to win the propaganda war. There is no alternative. No shortcut.

Unfortunately, Israel seems to be going out its way not to assert its legal rights to all of Israel, including Judea and Samaria (what some incorrectly refer to as the ‘West Bank,’ the name given by Jordanian colonizers evicted in 1967). The vast majority of Israel groups are not trying, either. Quite the opposite, in fact.

I personally witnessed a senior executive from a major Jewish organization jump up and declare to an audience, ‘Our organization distances itself from this presentation!’ when the late Israel land rights advocate, researcher and author, Salomon Benzimra (author of The Jewish Peoples’ Rights To The Land Of Israel) finished a presentation to a Muslim group in Canada. (likely the first time in history that a Jew was invited by Muslims to talk about Israel’s land rights). When I asked him if Salomon had said anything that wasn’t true he replied, ‘No, but EVERYBODY in Israel supports a two state solution.’ 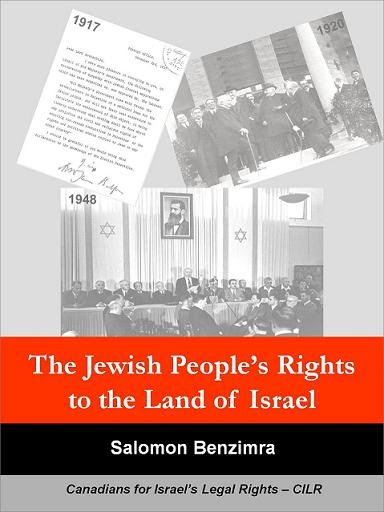 No wonder Jewish kids are siding with Israel’s enemies

During an Israel Truth Week event at Ryerson University in Toronto, I was told by a Jewish student leader that when someone accuses Israel of ‘occupation!’ they are trained to say, ‘Israel wants peace, but she doesn’t have a peace partner.’ This, of course, is consistent with the never-ending ‘peace process’ search for a NEW two state solution.

I deliberately use and emphasize the word ‘NEW’ because there was an ORIGINAL two state solution in 1922: a momentous document of international law called the Mandate For Palestine which was approved by the world, a document that recognized the ancient historical ties of Jews to Israel/Palestine (‘Palestine’ was the name given to Israel by Roman Emperor Hadrian circa AD135 to try to erase Jewish history). A document that specifically authorized Jews to ‘reconstitute’ their ‘national home’ in Palestine/Israel. 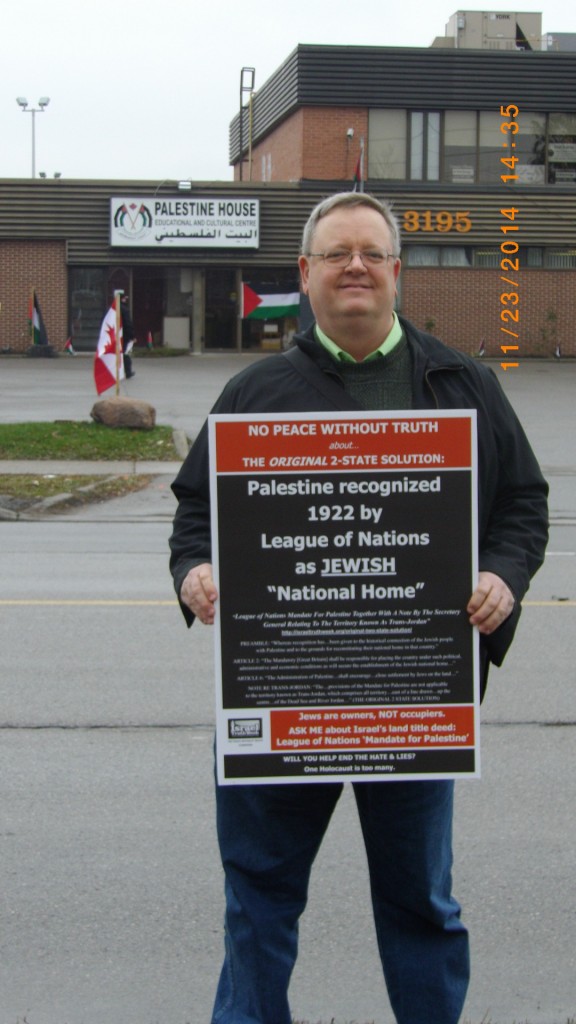 The author at a protest at Palestine House, Mississauga, Ontario, Canada whose funding was revoked by the Canadian government because of the centre’s ‘pattern of support for extremism.’ [https://www.mississauga.com/news-story/3123915-government-ends-funding-for-palestine-house/]

Instead of arming the kids with a moral argument based on Israel’s ‘deed’ from the world community, someone is teaching Jewish students to say, in effect, they agree Israel is illegally occupying Arab land, but the mean Arabs don’t want peace. This is a losing argument because not only does it not counter the core of the vilification of Israel as an occupier, it actually reinforces the allegation by failing to address it.

Not only is Israel losing the counter-propaganda war, she is going to lose without firing a shot. Believe it or not, my friends at Canadians for Israel’s Legal Rights (CILR.org), who have met with various Israeli leaders, advise that Israel does not teach the history of the Mandate For Palestine in its school system!

I have personally trained over 450 Zionists, Jewish and Christian. I always begin by asking who has heard of the Balfour Declaration (1917), the San Remo Conference (1920), and the Mandate For Palestine (1922). Most of the audience has. Then, I ask, ‘How many of you have read the words of Israel’s land title deed, the Mandate For Palestine?’ Surprisingly, only about 10 people, or 2%, of my trainees had done so before meeting me, and they include committed Zionists.

No wonder so many Jews are siding with Israel’s enemies. Can one really blame them? They don’t know their own history, have never read their country’s land title deed, and have never been taught how to take charge of the narrative. 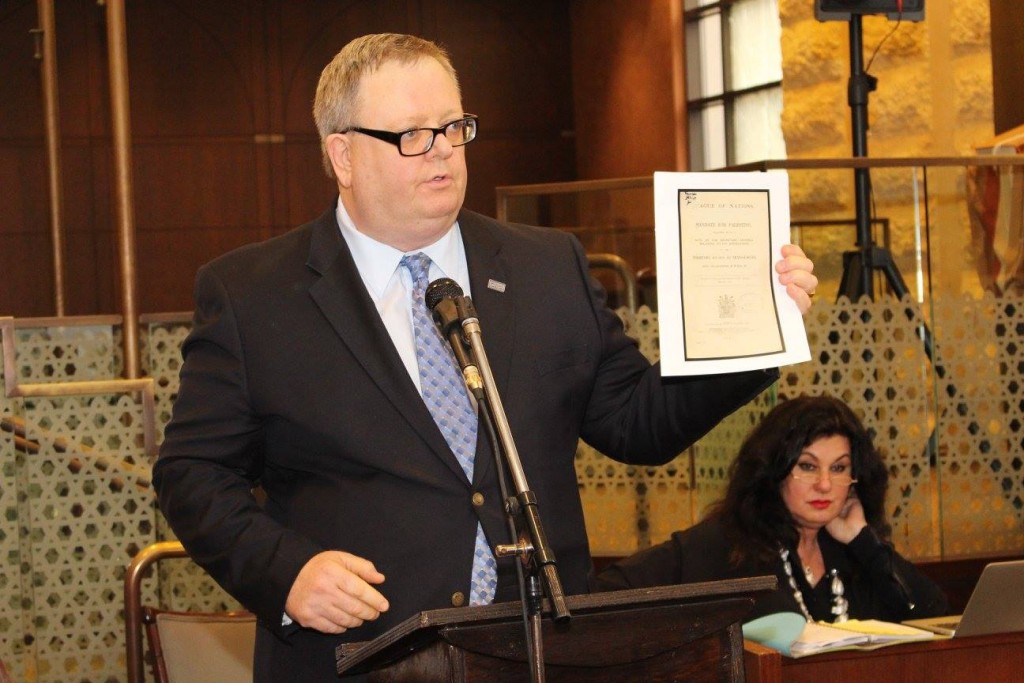 It is urgently time to implement a program for all Jews and friends of Israel, especially students, in order to equip them with tools to expose the ‘occupation’ lie.

One often hears at Israel events, ‘We need to stop preaching to the choir, and reach new people.’ I understand, but I respectfully disagree: we need to first make sure the choir has been properly trained and is singing the right notes from the right songbook. When only 2% of Zionists have read Israel’s land deed; when there is no consistent counter-occupation strategy, the choir is in desperate need of training and inspiration. 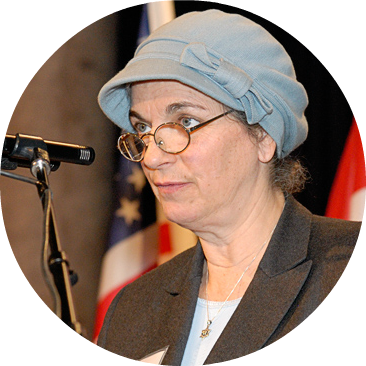 After my very first training of approximately 50 ardent(!) Zionists, I received this heartwarming message from Renanah Gemeiner (above), a land rights advocate who sits on the Toronto Zionist Council: ‘“All my life I never had a copy of my country’s land title deed until you put one in my hands. Your support, understanding, vision and belief in us gave me the courage to stand up as a proud Jew.”

Jews and friends need to understand where Israel’s modern legal rights come from. Then, they will be inspired to take that message to the world and demand it cease the demonization and recognize that the Jewish People are owners, not occupiers. Nothing less will win the counter-propaganda war.

Mark Vandermaas currently trains Zionist activists how to take down the fake ‘occupation’ narrative via his Israel Truth Week project. He has been called a ‘Damn Zionist’ by his enemies and an ‘Honorary Jew’ by his allies. He has organized pro-Israel conferences, and personally trained over 450 Zionists to make a moral argument against the ‘occupation’ lie. His rule-of-law activism during the Caledonia crisis in Canada has been cited in two books: the bestselling Helpless, by Christie Blatchford, and in Gary McHale’s Victory In The No-Go Zone.

About the Author
Mark Vandermaas is a Christian Canadian activist/educator who travelled Israel as a UN peacekeeper in 1978. He founded Israel Truth Week (IsraelTruthWeek.org) in 2012 after Jewish students at Western University were intimidated while campus police watched. Mark has personally trained over 450 Zionists how to liberate Israel from the fake 'occupation' narrative by using Israel's land title deed, the 'Mandate For Palestine,' to make a powerful moral argument for Israel's land rights.
Comments