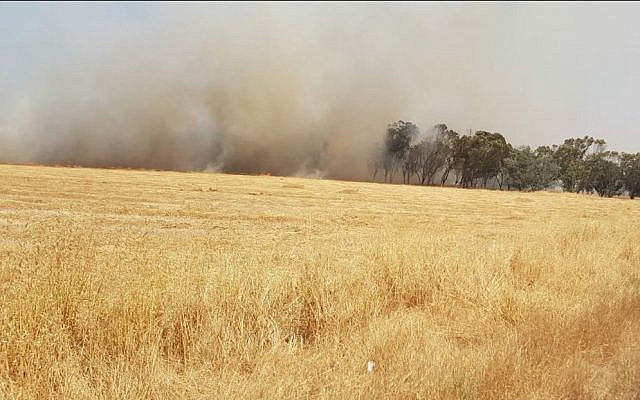 Land in southern Israel, near the Gaza border, burns possibly as a result of incendiary balloons sent from Gaza on May 7, 2021. (Moshe Baruchi/KKL-JNF/courtesy)

Some people accuse me of being an optimist. Yet this time, the unprecedented changes that have occurred over the last 12 months in Israel’s relations with the Arab world and with its own Arab citizens would seem to provide a strong reason for it. All the more so because they represent changing regional interests that provide a solid basis. In fact, the mini-war with Hamas and the simultaneous rioting among Israeli Arabs can now be seen more clearly for what they actually were — insignificant blips that did nothing to derail normalization, but rather showed the desperation of its opponents.

And yet the pessimists should not feel totally defeated. Several players and pundits have noted that the Abraham Accords and the general rapprochement of Sunni Arabs with Israel have been aided by the strategy of not discussing the past. That is, not to discuss who was right and, so, who is to blame for continued Palestinian statelessness.

This approach is based on the intuitive common wisdom that if one side is (mostly) right, then the other side must be (mostly) wrong. And since we are not able to agree about who is right, we just sidestep it. However this means that while we are making peace, we are allowing our narratives to remain at war.

I believe that such thinking is not only mistaken; it is rooted in Western modes of thought at odds with the Jewish tradition:

When the Talmud (Bava Metzia 2a) resolves a dispute of two people who sincerely claim ownership of the same object, it decides to split it in two. The astute reader may ask, “Is that not exactly what happened when the United Nations decided to partition the land held by the British Mandate?” Yes and no. For the Rabbis didn’t just leave it at splitting it. They understood that while equity is reasonably served by such a decision, both sides will feel the resolution unjust. So they imposed an oath on both claimants that they own at least half of the property. That way, a solution is found without forcing either party to give up their full claim — because most people care about being right at least as much as about the property that comes with it.

It seems to me that the Rabbis were only able to come up with such a solution because they were heirs to a tradition that recognizes that both sides could actually be right. One of the key texts in this regard is the upcoming Torah reading at the beginning of the Book of Deuteronomy. There, Moses’ narration of the story of the spies is completely different than the original narrative found in the Book of Numbers (13-14). Given that this dissonance is so obvious, it has long been seen as an indication that there is more than one way to look at any given set of facts. (Listen here for the recording of my Zoom class: Was Moshe a Post-Modernist?)

It is just such an understanding that was expressed by the Rabbis’ recognition that even two diametrically opposed viewpoints could both be the “words of the Living God” (Eruvin 13b). It is also that which would lead Rav Avraham Yitzchak HaKohen Kook to more recently posit that, “And even things that appear… contradictory, only via the gathering of all the parts and all the elements and all opinions that appear to differ… only through them will the light of truth and justice appear” (Olat Raiyah 1 p. 330).

I call this narrative pluralism and am convinced that it has tremendous potential to promote conflict resolution in general and to bring true and complete peace with the Palestinians in particular. In one sentence, the idea is to recognize that there is more than one legitimate way to organize and understand historical facts.

This is admittedly more difficult, yet it has already occurred in some parts of Israeli society. Accordingly, Amos Oz would have no trouble recently describing the core Palestinian narrative:

The whole of Palestine had been Arab land for hundreds of years, until the British came and encouraged hordes of foreigners to spread all over it… purchasing land… from corrupt landlords, and driving out the peasants who had farmed it for generations… Thanks to their deviousness and technical superiority… [the Jews] would do here exactly what the whites had done to the indigenous populations in America, Australia and elsewhere.

Note that such a core narrative need not be contradictory to the core Zionist narrative of Jews coming back to their ancient homeland — legally, at great expense and with the approval of the international community — specifically at a time when it had been shown how vulnerable the Jews were without their own country; and that it has been Arab intransigence and belligerence that has led to almost all of their own problems.

While there can be many reasons that Israelis — and Jews, more generally – have been more able to recognize the Palestinian narrative than visa-versa, narrative pluralism must take root in the Arab world as well, if there is to be a deeply rooted peace. In the meantime, we must model what we expect – but ultimately will have to demand – from the other side, such that more of us learn how to validate the Palestinian narrative, even while continuing to hold fast and cherish our own. In a different context, Rav Shagar (Shimon Gershon Rosenberg) described the approach as follows:

Openness can be a higher perspective – absolute commitment to my truth, but with the capacity to recognize the truths of others.

As for the Jews, that higher perspective is actually our own.

About the Author
Rabbi Francis Nataf is a Jerusalem-based educator and thinker. He is the author of the Redeeming Relevance series on the Torah and of many articles.
Related Topics
Related Posts
Comments
Advertisement