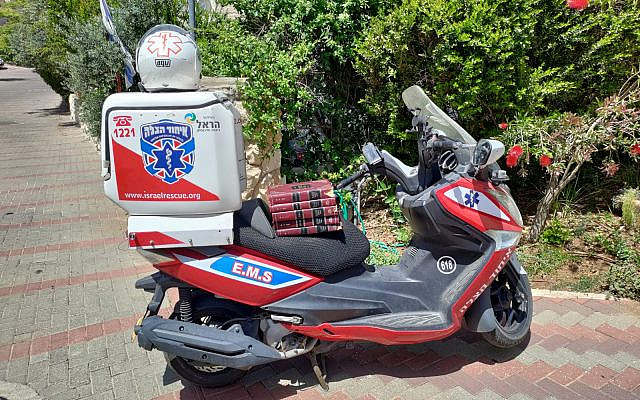 My ambucycle with the Chumashim on top of the seat.

It certainly isn’t usual to sit on Chumashim. They are holy books and should be treated with respect. When they fall on the floor, we are taught as young children to pick them up and kiss them. They hold the word of G-d and therefore must be respected, certainly not played with and definitely not sat on. That is the general rule, right? I guess, like all other general rules, there are exceptions when one is allowed to break them. Today was one such exception, as not only did I sit on a complete set of Mikra’ot Gedolot Chumashim, parshanim and all, but I did so with a Rabbinic blessing. 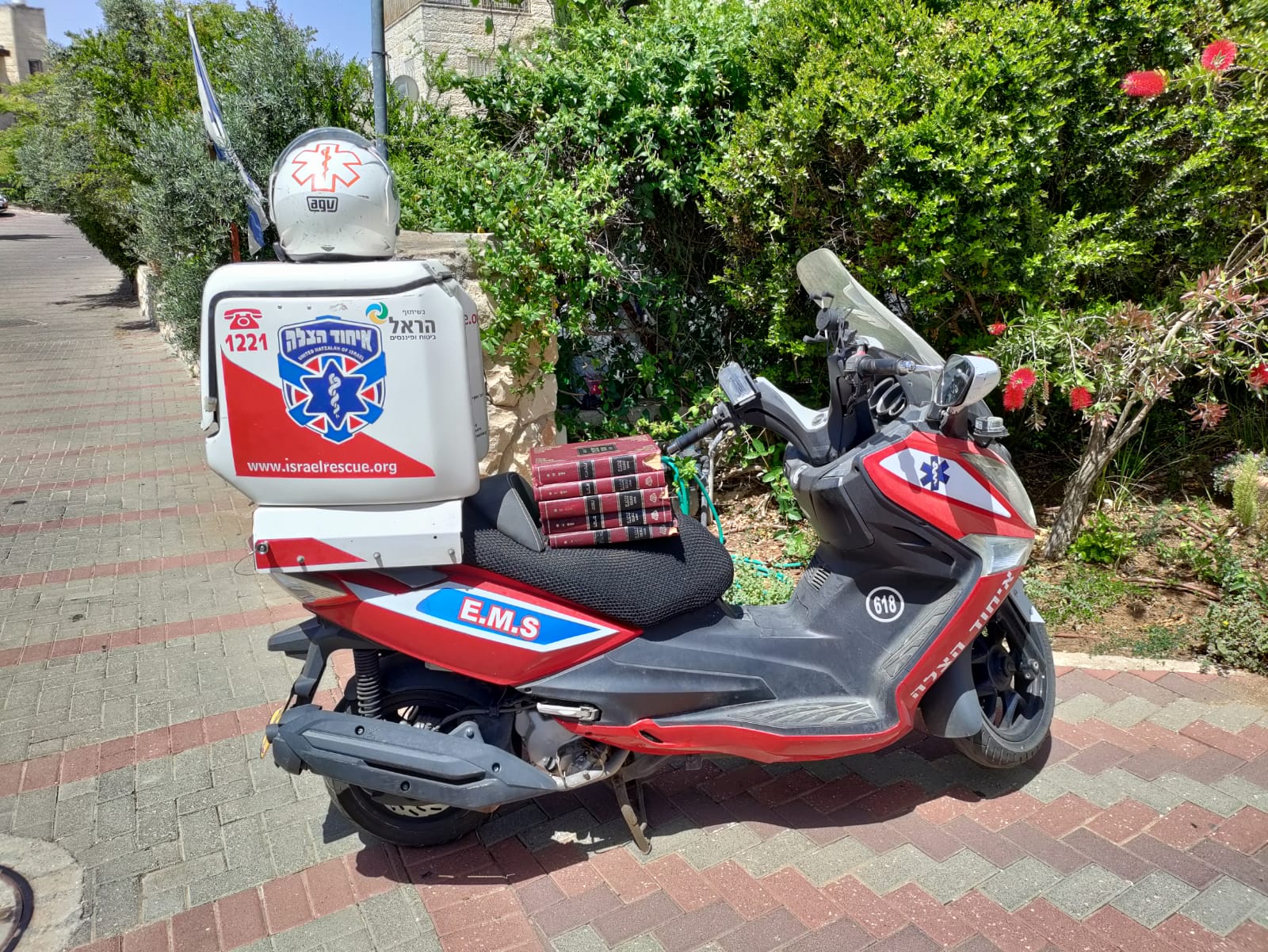 The donated Chumashim on my ambucycle just before I delivered them.

Similar to many other stories in my life, this one also begins with volunteering. As part of United Hatzalah of Israel’s Ten Kavod (Giving Honor) project, which has trained medical responders who provide weekly medical checkups to elderly people who live on their own, I visit an elderly man each week in his home in Efrat. The purpose of the visits is to both check up on the older person from a medical perspective and make sure that they are in good health, or at least that their health isn’t deteriorating, and at the same time, provide them with a social outlet and help disperse the sense of loneliness that they feel.


During our visits, we sit and talk about life, I tell him my story and he tells me his. For Yom Ha’atzmaut I brought him to my home so that he could enjoy a family barbecue, something which he hasn’t been able to do for many years, as he has no family in Israel and due to his medical condition he cannot move very well. He also didn’t leave his house last year due to the Coronavirus.

He thoroughly enjoyed the barbecue and getting out of his house. It was the first time he was able to do so in a long while. This week during our meeting, he thanked me for inviting and bringing him to participate. As we got to talking I asked him about his plans for the upcoming holiday of Shavuot. He bemoaned the fact that he didn’t really have any, not that he was planning to stay up all night, but even during the daytime, he didn’t have anyone to learn with. He then regaled me about how much he loves the Rambam, dislikes litvaks, and used to spend lots of time in one of the local Yeshivot and enjoyed learning with the talmidim there, until his medical condition prevented him from going. In an off-hand comment, he complained that he didn’t even have any chumashim to go over the weekly Torah portion.

I stopped his reverie and asked, “Why don’t you have any chumashim?” He replied that he has a siddur in it which contains the parshiyot but it isn’t the same as a Chumash with the meforshim in it, and he particularly misses learning with the Mikraot Gedolot set of chumashim. He then said that because of his eyesight, he would prefer using an edition with large print, but doesn’t know where to get one and doesn’t have money to buy one. He left it at that and then went back to discussing how much he enjoys learning the Rambam that he has in his cabinet. From there he asked me to take care of a few chores that were beyond his capabilities and then to check his blood pressure, which we try to do every week so as to make sure he is in good health.

As I left his apartment, I thought to myself that I have to help get him a set of Chumashim. They say it takes a village to help raise a child, I believe it takes a village to help one another through some of the more difficult aspects of life and lend a hand in matters big or small that can make a big difference for someone. With that in mind, later that night, I sent a Whatsapp message to community second-hand group asking if anyone had any ideas of where or how I could get a set of large print Mikraot Gedolot Chumashim for this man who is partially impaired visually and cannot obtain a set on his own.

As messages do on Whatsapp, this message got passed around and within minutes I had no less than 10 suggestions of where to look and how to find some. People even offered to chip in to pay for them.  I was astounded. I was expecting some help, perhaps finding a person who had an old set and was willing to part with them. But the number of responses I received, from people I don’t even know, was surprising and filled me with joy. People really cared and wanted to help.

One of these suggestions, sent to me by a fellow first responder from the community, suggested that I speak to the local Chabad Shaliach Rabbi Nissan Nachshon. Rabbi Nachshon, without thinking twice, invited me to come to the Chabad house in Efrat the next morning. When I arrived he handed me five Mikraot Gedolot Chumashim in large easy to read print that he had and told me to give them to this person who is in need of them so that he can learn Torah. I asked if I can make a donation in compensation and he told me not to worry about it and that he was simply happy to help participate in this mitzvah.

I had one problem, I was driving my ambucycle and the volumes were too large to fit into the container on the back of my vehicle with all of the medical equipment that I am required to carry with me at all times. I had no choice but to put the Chumashim under the seat of my ambucycle, and thus sit on them for the journey from the Chabad house to the man’s apartment to deliver them. Luckily there was a motorcycle seat in between and the Chumashim just barely fit in the compartment underneath the seat. During the entire trip, which consisted of less than ten minutes, I couldn’t help but think how strange a sensation this was sitting on top of Chumashim in order to deliver them to someone in need and thus fulfill a mitzvah of enabling him to learn Torah.

It took a village to send me the suggestions of how and where to find the Chumashim. It took the kindness of the Chabad Rabbi and Shaliach, Rabbi Nachshon to donate the sefarim. And it took the kindness of some very good people who offered to donate time or money in helping this man learn, in order to enable him to fulfill a mitzvah that he has longed to do but was unable to do himself.

I want to say thank you to my community of Efrat. I am astounded by the kindness and generosity of the people who live here time and time again. I saw it first hand over and over during the Corona-pandemic and I am happy to be a part of a community such as this one, with people who embody the attribute of our forefather Abraham, the attribute of loving-kindness.