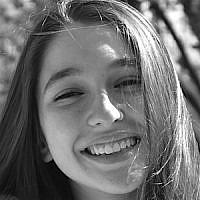 The Blogs
Talia Shemony
Apply for a Blog
Advertisement
Please note that the posts on The Blogs are contributed by third parties. The opinions, facts and any media content in them are presented solely by the authors, and neither The Times of Israel nor its partners assume any responsibility for them. Please contact us in case of abuse. In case of abuse,
Report this post.

I believe we inherently want to do good. I believe it’s in our nature to be decent.  I believe we have a genuine desire to treat each other equally.

Unfortunately, there are those out there who do not believe as I do; especially when it comes to Israel.

These “non-believers” continue to espouse the view of Israel as a human rights violator. They shout from the rooftops about Israel killing thousands of innocent Palestinians for no reason. They spread lies about Israel restricting the freedoms of all Palestinians.

Last year the “Knife Intifada” arose and resulted in the deaths of 38 Israelis and the injuries of over 550 more Israelis. While the rest of the world heard about 235 Palestinians killed and just under 4,000 injured, I saw the media dig a deeper grave for the State of Israel.

I envision myself walking in the streets of Jerusalem talking with my father on the phone. Shabbat is close to arriving, the beautiful city of Jerusalem is glimmering, and I’m running to the grocery store to pick up some last-minute items. I then hear a noise, a screech. I turn to my right and see a car roaring down the street at an abnormal speed. I rotate my body and see a seven-year old girl on her bicycle, crossing the road. It takes less than ten seconds for me to witness the brutal death of young girl as the car rams into her. But the horrific scene doesn’t stop there. The driver of the car runs out with a butcher knife and proceeds to stab people, to attack people, to murder people. Ten seconds later Israeli security personnel arrive on the scene screaming “halt, stop, don’t move or we’ll shoot” but the terrorist does not stop. He runs towards the personnel prompting them to do the one thing they can do; shoot.

I come home from the grocery store completely stunned by what just occurred. I quickly check American news websites and I am shocked to see three different headlines about the brutal attack that I witnessed hours ago:

The media manipulates a story to make us believe that Israel kills innocent men, women, and children. This manipulation just fuels Hamas and Hezbollah, who have in fact used human shields and purposely placed their own people in harm’s way in an attempt to kill ours.

While I do believe that we inherently want to do good and be decent and treat each other equally, it is apparent to me that others do not.

The enemy is winning and it’s not just media bias. It’s real life.