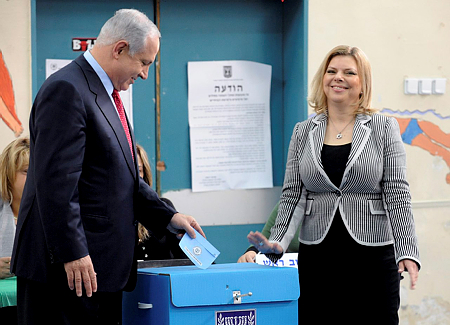 Love him or loathe him, you can’t take away the achievements and experience of Prime Minister Netanyahu. Of course, being in a job like this as long as he has, unless you’re incompetent, you’re going to have far more experience, achievements, and contacts than anyone else. That’s obvious.

All the more so if during one’s tenure, rather than cultivating new leaders and successors, you cast off those who are closest to you and who looked to you as a leader to emulate. But now, it seems that as much as Israel’s foreign and economic policy have done well, Bibi’s policy of discarding capable successors has come back to bite, harder than ever. His recent analogy about who we should trust to fly a plane, an experienced pilot or a new pilot, has a huge fallacy: that he has basically pushed all the other pilots out of the cockpit. Flying alone as he’s done is also dangerous, because when he fails, we all crash. But, even according to Bibi’s example, the others are still pilots.

If the polls are accurate, it’s the first time in a long time that Likud will lose such a large percent of its seats without a faction breaking away to form another party as happened with Kadima. This reflects me well as a recovering Bibi supporter.

Let’s not take anything away from Netanyahu as far as the myriad of achievements for which he’s responsible. The list is long. I don’t diminish any. Especially relating to international affairs and diplomacy. Sure, there are things he could have done differently and better. But by in large, he deserves plenty of credit.

However, now it’s time for him to go. As much as he deserves credit, now with our fourth election forced upon us, he also deserves a lion’s share of the blame. Rubbing salt in the wound, each time we’ve had an election recently, he pulls a rabbit out of the hat in some new diplomatic achievement. It’s a bit too transparent that these are timed “coincidentally” to sway the Israeli voter. Whether the Peace to Prosperity plan’s announcement, recognition of Israeli sovereignty in Jerusalem or the Golan, flying to and opening relations with important African nations, the return of the remains of Zachary Baumol from the 1982 Lebanon War, release of a young Israeli woman imprisoned in Russia, and more. These all seem just a little too choreographed to make us feel like we need him; that only Bibi can.

Last week, we were treated to the announcement that Bibi was headed to the UAE to meet the Crown Prince, and maybe even a cameo appearance by the Saudi Crown Prince. On the surface, yeah, big achievement. But the fact that this was delayed and conveniently rescheduled within two weeks of the election, I call BS.

Before his trip was canceled due to a diplomatic brouhaha with Jordan (for which he also needs to take responsibility, regardless of whether Israel was right or wrong), it was announced that Sara Netanyahu was hospitalized because of appendicitis. I am sure most Israelis wish her well, until 120.

But I was bothered by talk of Bibi canceling his trip (even before he could use Jordan as an excuse), because Sara was in the hospital. Come on. Was she ever in a life-threatening situation? I am sure that no matter her condition, and how much pain she might have been in, she had the best medical care possible.

That Bibi would consider canceling such an important visit (about which it’s reported that he connived to make happen) because of Sara’s appendix seems like a bad plot in a self-published book that nobody would read. By comparison, Menachem Begin, arguably one of Israel’s greatest leaders, left Israel on perhaps an even less important trip and came home early when his wife died.

If Bibi’s trip was so important, Sara’s appendix should not have been an obstacle. Yair and Avner could hold her hand. Her husband has a job to do, a country to run. To many Israelis, this stinks of Sara calling the shots. If the UAE trip was not just a shameless pre-election stunt, he should have gone. That Jordan didn’t approve his flight plan gave Bibi good cover for not canceling because of Sara. But it also highlights his diplomatic blunder.

As much as these events are staged, timed to sway the voters, and make us think that only Bibi can pull these rabbits out of a hat, even maybe that no others have a hat at all, I’ve moved beyond Bibi. It’s time for a change.

Based on current polls, there are three people, all more or less equal in their experience, who could mathematically get enough votes to form a government other than Bibi. Having made the leap to understand that it’s no longer Bibi’s turn, I cannot help but lean to Gidon Sa’ar and New Hope because he’s uniquely placed to actually be able to form a government. Yair Lapid won’t have the broad support. I don’t like Naftali Bennett being willing to join a government as Defense or Foreign Minister, with Shaked and a few others getting plum appointments, keeping Bibi in place. If I wanted that, I could vote for Likud.

Rather than waiting around with all the other Likud wannabe Bibi-successors, Sa’ar withdrew all his investment in Likud and placed his chips elsewhere. I admire that. It was not whimsical and whiney because he didn’t get his way. It was strategic, and even risky.

There are other Likud MKs who are no less tired of Bibi’s antics, but don’t have the backbone to do what Sa’ar did. It makes Sa’ar uniquely capable to go to several of them and offer an opportunity not to be in the opposition. If enough of them were to do so, it would preclude the need to bring in the small left-wing parties into what already would be a complicated coalition. Ideologically, that’s a sound mutual interest and could preclude a fifth election.

Yes, Bibi has long-term relations with world leaders that others don’t have. But those who want to connect with Israel will do so because Israel is important, not because Bibi is king. Despite all his achievements and tenure, Israel is bigger than one man. It’s time for a change.