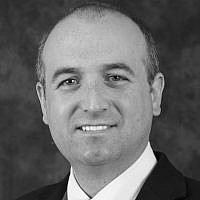 The Blogs
Robert P. Barnidge, Jr.
Apply for a Blog
Please note that the posts on The Blogs are contributed by third parties. The opinions, facts and any media content in them are presented solely by the authors, and neither The Times of Israel nor its partners assume any responsibility for them. Please contact us in case of abuse. In case of abuse,
Report this post.

President William J. Clinton was in office less than a year when Israeli Prime Minister Yitzhak Rabin and Palestine Liberation Organization Chairman Yasser Arafat met on the White House lawn. On September 13, 1993, Rabin and Arafat signed the Declaration of Principles on Interim Self-Government Arrangements, an agreement that would pave the way for increasing autonomy for the Palestinians in the West Bank and Gaza Strip and a commitment by the two sides to a negotiated settlement.

All of this is relatively well-known, but what is sometimes overlooked is what occurred less than a week earlier, when Arafat and Rabin exchanged a series of letters.

In his letter to Rabin, Arafat committed the PLO to negotiations with Israel, accepted United Nations Security Council Resolutions 242 (1967) and 338 (1973), two instruments that had by then come to represent the consensus approach to settling the Israeli-Palestinian dispute, and “recognize[d] the right of the State of Israel to exist in peace and security.” Rabin responded in a carefully choreographed move, recognizing the PLO on the same day, September 9, as the “representative of the Palestinian people” and committing Israel to negotiations.

These reciprocal commitments form the bedrock for all subsequent agreements between Israel and the Palestinians. Take away this foundation, and the peace process, from the perspective of international law, crumbles.

In light of this background, Israeli Prime Minister Benjamin Netanyahu was well-advised in rejecting a recent French proposal to host a major international conference aimed at settling the Israeli-Palestinian dispute. Paris had threatened to unilaterally recognize a Palestinian state if the conference did not lead to a final settlement. Netanyahu correctly identified this as “an incentive for the Palestinians to come and not compromise.” And he reiterated Israel’s long-held offer of direct negotiations with the Palestinians without preconditions.

But Netanyahu did not go far enough in rebuffing the French proposal. He should have called for the immediate amendment, if not rescission, of the 2004 Arab Charter on Human Rights. Netanyahu should have made clear that Israel would refuse to participate in any peace conference with the Arab world until this is done.

Why should Israel take what seems on its face such a dramatic step? Because the Arab Charter on Human Rights is entirely incompatible with Israeli-Arab, much less Israeli-Palestinian, peace. It turns the 1993 Exchange of Letters between Israel and the PLO on its head; and it makes sustainable peace impossible.

The Arab Charter on Human Rights’ preamble rejects Zionism as a “violation of human rights and [. . .] a threat to international peace and security.” Article 2(3) refers to it as an affront to human dignity and fundamental human rights. And in no uncertain terms, article 2(3) then goes on to condemn Zionism, chillingly calling for its “eliminat[ion].”

In other words, the preeminent human rights treaty in the Arab world calls for the evisceration of Jewish “peoplehood,” the elimination of one and only one self-determination movement in particular, and that is Zionism, the self-determination movement of the Jewish people. The treaty seeks to do so, furthermore, for those states parties to the treaty, as a matter of international legal obligation. It “weaponizes” the language of “human rights” for ends that are hardly consistent with the protection of human dignity and the human person.

Most troublingly of all is that the Arab League recognizes “Palestine” — the use of the quotation marks highlights the considerable debate in the international legal community as to whether “Palestine” is a state and, as such, can even become party to treaties — as a state party to the Arab Charter on Human Rights.

How can a legal commitment to “eliminate” Zionism be reconciled with the PLO’s foundational recognition in September 1993 of the “right of the State of Israel to exist in peace and security”? Reconciliation only seems possible by eliminating the Jewish people’s self-determination in their historic homeland.

It would be one thing had the Palestinians entered into this legal obligation prior to September 1993 — in 1988, for example, the PLO felt free to publicly convey its view of Israel as a “colonialist, racist, Fascist State based on the seizure of Palestinian land, extermination of the Palestinian people and, in addition, threats, aggression and expansionism in neighbouring Arab territories.” Quite another to have done so while professing a commitment to the “peace process,” that is, after September 1993.

In the past, Israel has criticized Palestinian President Mahmoud Abbas for his outright refusal to recognize Israel as a “Jewish state.” But Palestinian acceptance of the Arab Charter on Human Rights goes a step beyond even this. It reflects an active commitment to the elimination of Zionism, harkening back to the United Nations’ dark days of “Zionism is racism.”

If France wishes to make a lasting contribution to peace in the Middle East, it should call upon Arab states, or at least the Palestinians, to accept terms of reference for an international conference that calls for two states for two peoples. And it should insist that any pretense to “eliminate” Zionism is about as sensible and strategic for the Arab world as was its rejection of the United Nations General Assembly’s planned partition of Palestine in 1948.

Of course, it is probably unrealistic to expect Paris to do this when Israel cannot even point out the hypocrisy of negotiating with a party that is treaty-bound to “eliminate” the self-determination of the Jewish people.

But one can always hope that principle and clarity can at times outweigh short-term advantage and showmanship in international affairs.

Robert P. Barnidge, Jr., is Lecturer and Coordinator of International Relations at Webster University and Affiliated Professor at the University of Haifa. His most recent book is Self-Determination, Statehood, and the Law of Negotiation: The Case of Palestine (Hart, 2016).

About the Author
Robert P. Barnidge, Jr., is Lecturer and Coordinator of International Relations at Webster University and Affiliated Professor at the University of Haifa. His most recent book is Self-Determination, Statehood, and the Law of Negotiation: The Case of Palestine (Hart, 2016).
Comments
Advertisement